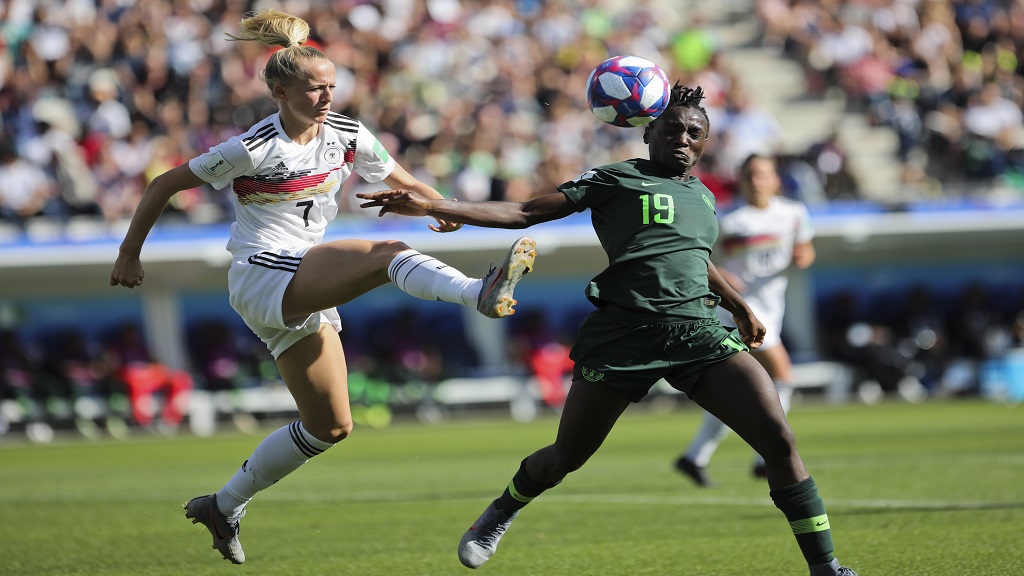 Germany's Lea Schueller, left, tussles for the ball with Nigeria's Chinwendu Ihezuo during the Women's World Cup round of 16 match at the Stade del Alpes in Grenoble, France, Saturday, June 22, 2019.

Alexandra Popp had just scored a go-ahead goal against Nigeria in her 100th international appearance when Japanese referee Yoshimi Yamashita signaled for a video review to determine whether a German teammate Svenja Huth, who was in an offside position, obstructed the view of goalkeeper Chiamaka Nnadozie.

"I was a bit irritated to be honest," the German captain said through a translator.

Popp's goal stood, and a few minutes later the match was stopped for another video review, this time to determine whether Germany's Lina Magull had been fouled in the penalty area by Evelyn Nwabuoko. Having seen the stud marks in her teammate's leg, Popp was pleased the referee took a look and awarded a penalty kick.

"Otherwise, I would have asked myself why we were using this technology," Popp said, "so it was quite obvious in the pictures."

"Football is also a game with a rhythm and if you break the rhythm sometimes that is not good," he said. "It's good for the game, but I don't think anybody really has the final solution for VAR yet."

Popp scored in the 20th minute. Sara Däbritz made it 2-0 in the 27th with the penalty kick and Lea Schüller got the final goal in the 82nd.

"All the interruptions are quite difficult to handle, especially emotionally, but we tried to keep calm," Germany coach Martina Voss-Tecklenburg said through a translator. "Maybe they can speed up the whole process."

Players are unsure when a video review will be signaled.

"It was a bit of insecurity throughout the match because we didn't quite know what was assessed in a certain moment," Popp said. "But in general I think it's important to have this sort of assessment."

Second-ranked Germany, which have outscored opponents 9-0, play the winner of Monday's match between Sweden and Canada on June 29 at Rennes.

"She congratulated us," Voss-Tecklenburg recalled. "She said she was very delighted."

The weeklong layoff gives time for midfielder Dzsenifer Marozsán's broken left middle toe to heal. Injured in the opening win over China on June 8, Marozsán recovered sufficiently to be available as a substitute Saturday if she had been needed.

"Based on today's physical appearance, I would say she's able to play the next match," Voss-Tecklenburg said,

The Germans, who won the tournament in 2003 and 2007, have never failed to reach the quarterfinals.

No. 38 Nigeria was in the knockout phase for the second time, the first since it lost in the quarterfinals to Brazil in 1999, and it joined Cameroon to become the first pair of African teams to reach the knockout stage in the same Women's World Cup. The Indomitable Lionesses play England on Sunday.

Däbritz scored on a low penalty kick beyond the outstretched left hand of Nnadozie, her third goal of the tournament and 13th of her international career.

Nigeria had an excellent chance to cut its deficit in the 50th when second-half substitute Rasheedat Ajibade streaked up a flank and passed to an open Desire Oparanozie, but the ball was just ahead of the forward and rolled by.

Schüller got her ninth international goal following a giveaway by Halimatu Ayinde.

The Super Falcons were missing defender Ngozi Ebere and midfielder Rita Chikwelu, who served suspensions for yellow card accumulation, and forward Asisat Oshoala, who was injured.

"I think we showed the whole world that Nigeria has a team that improved a lot," Dennerby said. "It's going the right way."

No sold out games in Women's World Cup round of 16