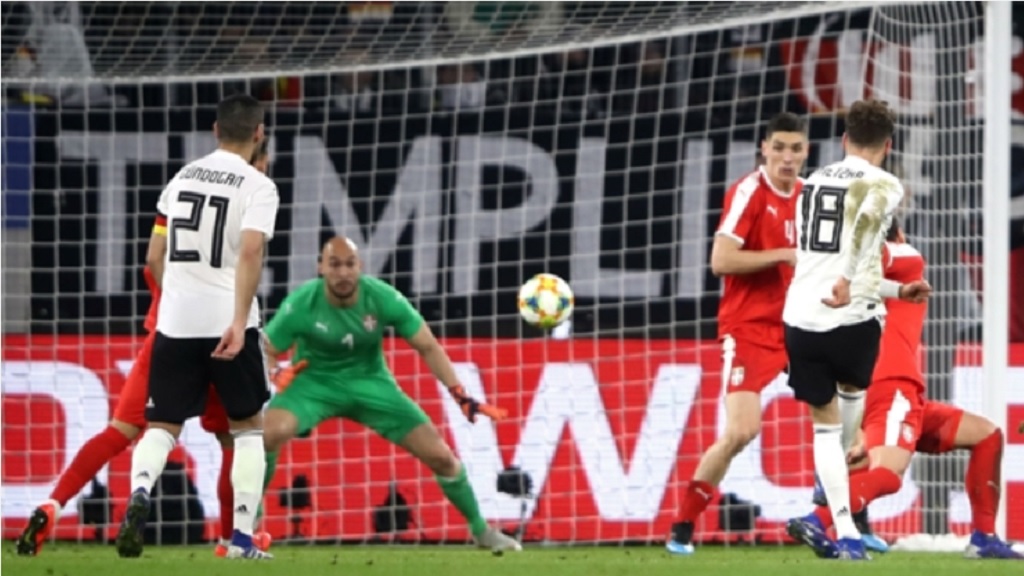 Low shocked German football earlier this month when announcing the World Cup-winning trio were no longer in his plans, and while Goretzka’s goal avoided defeat in Wolfsburg, the defensive performance suggested Hummels and Boateng could still be of use.

Germany's new-look back four held firm for just 12 minutes, as Barcelona-linked Luka Jovic nodded in from close range, with Serbia looking the more threatening for the majority of the first half.

The hosts coped better with Serbia's ability on the break in the final 30 minutes and were deserving of their equaliser courtesy of Goretzka, though they were unable to find a winner despite the late dismissal of Milan Pavkov.

Germany started brightly and controlled the early proceedings only for Serbia to find the net with the first attempt on target – Jovic expertly steering a header beyond Manuel Neuer after a corner fortunately deflected to the in-form Eintracht Frankfurt striker.

The visitors finished the first half on top, however, with a brilliant counter seeing Darko Lazovic square to the unmarked Adem Ljajic, who carelessly shot over with just Neuer to beat.

Serbia threatened again soon after the break when Lazovic horribly sliced a shot over from the edge of the box.

That miss was punished 21 minute from the end, Goretzka taking up possession inside the area, dodging one defender and firing a shot past Dmitrovic.

Serbia saw substitute Pavkov shown a red card for a studs-up challenge on Leroy Sane, albeit Germany did not have enough time left to take advantage of the extra man.

What does it mean? Boateng and Hummels the missing men

Low's decision to effectively end the international careers of Boateng and Hummels was only made to look even more bizarre by Wednesday's game.

Germany's defence constantly looked shaky against Serbia's dynamic attack, and they would have conceded several more had their opponents been more clinical in front of goal.

While Germany certainly had some standout players in the second half - particularly Marco Reus and Sane - Serbia's goalkeeper enjoyed a fine performance, making a host of excellent saves. He deserved a clean sheet, though there was little he could do to stop Goretzka's equaliser.

Havertz fails to make his mark

Germany were disappointing in the first half, with their front four failing to impress. The most underwhelming of them was arguably Kai Havertz, who was particularly quiet. The hosts improved immeasurably after he was replaced by Reus at half-time.

Things do not get much easier for Germany on Sunday, as they travel to Netherlands for their first Euro 2020 qualifier. Serbia, meanwhile, begin their campaign away to reigning European champions Portugal on Monday.