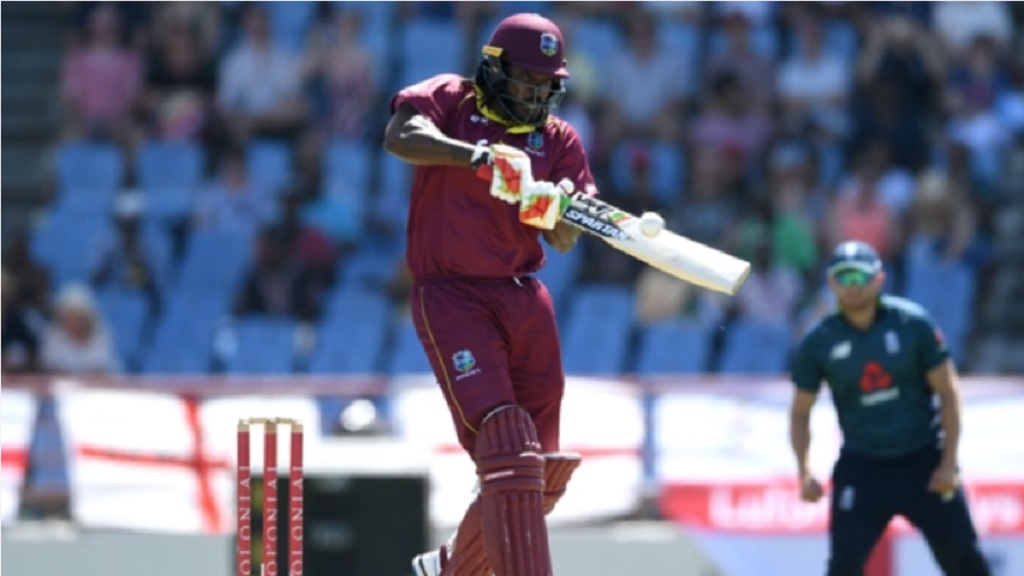 Chris Gayle goes on the attack during the fifth ODI against England.

Just 72 hours after amassing 418-6 to win the fourth game in Grenada on Wednesday to go 2-1 ahead, England were embarrassingly shot out for 113 to post their lowest total against West Indies in the 50-over format.

The home team's quartet of quick bowlers claimed all 10 wickets to fall in an innings that spanned 28.1 overs, the lively Thomas (5-21) leading the way with his first five-wicket haul in ODI action.

Gayle - set to retire from one-day duty after this year's Cricket World Cup - then rushed the hosts towards their minimal target in a hurry, the in-form opener continuing to torment England's attack by taking them for 77.

The opener was up for the challenge when confronted by an early short-ball barrage, launching a series of hooks and pulls over the rope in a whirlwind 27-ball knock that included nine sixes.

His half-century arrived in just 19 balls - making it the fastest ever by a West Indian - before Mark Wood eventually ended the onslaught by knocking over his off stump. The left-hander saluted an exuberant crowd at the Darren Sammy National Cricket Stadium as he departed after what is set to be his final one-day innings on Caribbean soil.

Wood had also bowled John Campbell – who contributed a solitary run to an opening stand worth 40 – while Chris Woakes cleaned up Shai Hope for 13, though the seam pairing came in for heavy punishment, leaking 55 and 56 runs respectively during six-over spells.

Darren Bravo ended up seven not out and Shimron Hetmyer was unbeaten on 11 as West Indies sealed the victory with an astonishing 227 balls to spare.

Their decision to bowl first certainly paid off as England failed to cope with the extra bounce in the pitch. After Jonny Bairstow (11) was bowled by Sheldon Cottrell (1-23) off an inside edge, a succession of wickets fell to short deliveries.

Joe Root (1) carelessly steered a cut shot straight to the fielder at third man to gift Jason Holder (2-28) the first of his two wickets, while Alex Hales edged behind when ambitiously attempting to force off the back foot against Carlos Brathwaite (2-17).

Thomas claimed his first in the innings when Eoin Morgan's top-edged pull picked out the man in the deep when on 18, and he also removed the dangerous Jos Buttler - who was joint leading scorer with Hales on 23 - in similar fashion.

Ben Stokes (15) and Moeen Ali (12) also perished taking the aggressive approach with their team in trouble before Thomas cleaned up Tom Curran to finish with career-best figures.

England tried to follow the example set by their opponents, but Gayle countered their bouncer plan by fighting fire with fire. He rolled back the years throughout the series – finishing it with 424 runs – with his last act on home soil making sure the series ended all-square.