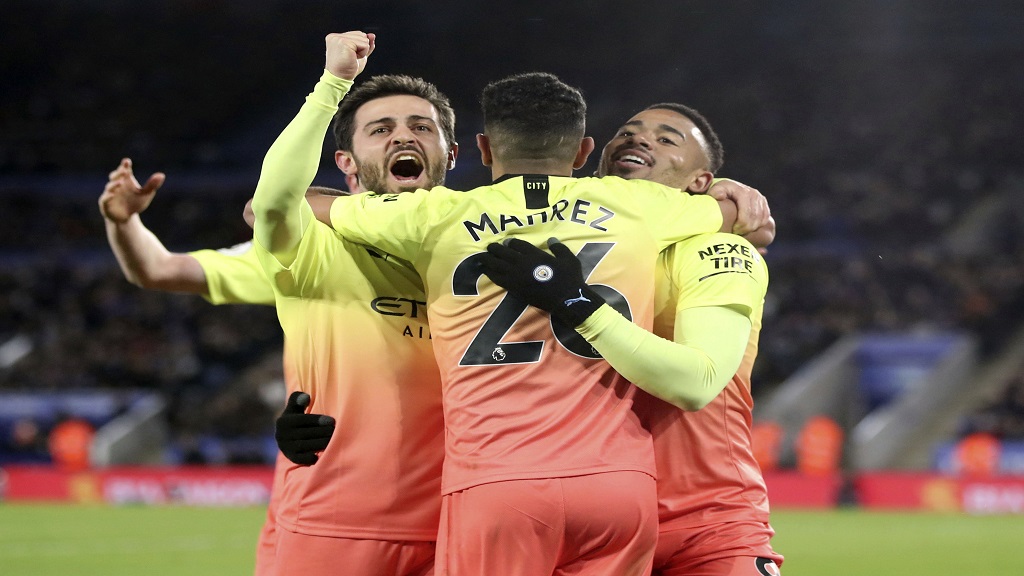 Kasper Schmeichel had already frustrated the visitors on a number of occasions in Saturday's clash prior to keeping out Aguero's 62nd-minute spot-kick.

But just as Leicester looked to be heading for a third draw in a row, substitute Jesus - brought on for Aguero - clinically converted 10 minutes from time at the King Power Stadium.

A second win in a row for City in what has been a difficult period off the field ensures they have a seven-point gap over third-placed Leicester, who hit the post through Jamie Vardy early on in their best chance.

Out-of-form striker Vardy picked out the frame of the goal inside eight minutes with just Ederson to beat following Aymeric Laporte's error.

Schmeichel was called into action for the first time 67 seconds later to keep out Riyad Mahrez's drive and was also equal to Ilkay Gundogan's low attempt.

Ederson did well to save James Maddison's audacious effort and the visitors had the ball in the net up the other end, only for Aguero to rightly be flagged for offside.

Kevin De Bruyne was the next player to be thwarted by Schmeichel, who followed that up by saving an Aguero penalty awarded after Gundogan's shot hit Dennis Praet's arm.

That was the fourth penalty out of seven the champions have missed this season, but they were rescued by Jesus' strike.

The Brazil international had been on the field for just three minutes when controlling Mahrez's pass and tucking past inspired Leicester keeper Schmeichel, the goal allowed to stand after a VAR check for a possible offside.