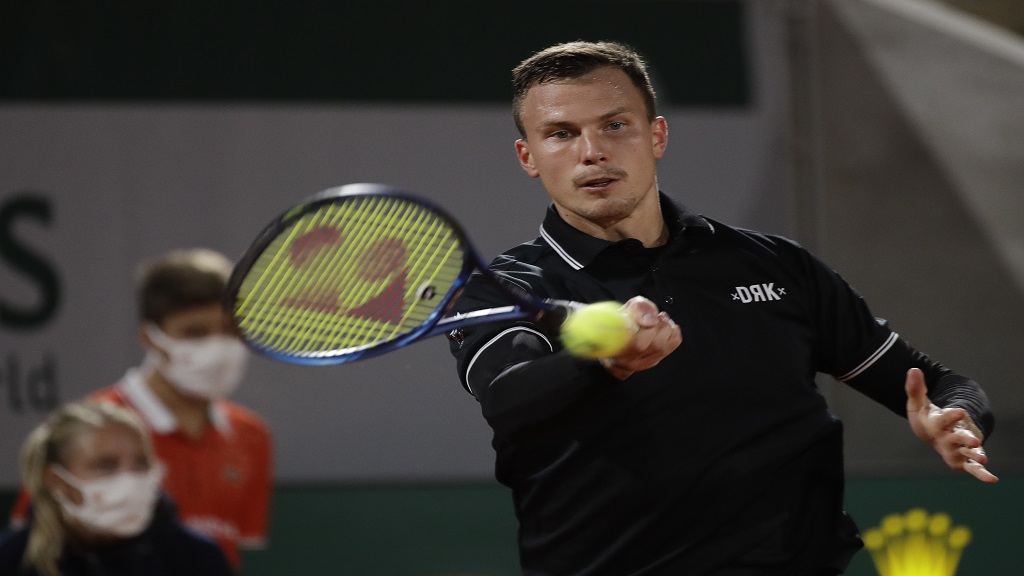 Daniil Medvedev suffered a stunning late-night defeat to Marton Fucsovics after Rafael Nadal beat Egor Gerasimov in the first round of the French Open on Monday.

It was after 11.30pm in Paris when the 28-year-old Fucsovics secured the first win against a top-five opponent in his career under the floodlights.

Medvedev lost the second set when he was given a point penalty for smashing his racket on an evening to forget for the Russian, who prompted raised eyebrows from his opponent when he won a point with an underarm serve.

Nadal overcame Gerasimov 6-4 6-4 6-2 and made notable strides from his quarter-final loss to Diego Schwartzman at the Internazionali d'Italia, while US Open champion Dominic Thiem also cruised into the second round.

Monfils' compatriot Corentin Moutet was knocked out by qualifier Lorenzo Giustino in a marathon five-setter and clay-court specialist Fabio Fognini tumbled out in four sets in his match with Mikhail Kukushkin.

Having struggled on serve in his surprise defeat to Schwartzman in the last eight in Rome, Nadal was much improved in that regard against Gerasimov.

He won 82 per cent of points on his first serve, with his improvement in that area leaving Nadal satisfied after coming through the first test in his quest for title number 13.

"I am trying to serve with high percentage. That's the first step that I have to do," said Nadal. "When I know that I can have a big percentage of first serves, then is the moment to increase the speed and increase the aggressiveness on the serve, no? Step by step. Today was the first step.

"Tomorrow, another day for practice. That's the only thing that I try to look at at this tournament, no? Try to be happy about every single improvement and try to give me a chance to be better every day."

THIEM NOT CAUGHT COLD BY CILIC

Thiem, fresh off his victory at Flushing Meadows, comfortably prevailed in a battle of US Open champions with Marin Cilic, spoiling the Croatian's 32nd birthday.

Thiem triumphed 6-4 6-3 6-3 and, while much has been made of the cold and the heavier balls at this year's event, the conditions are of no concern to the Austrian.

He said: "Conditions, I'm used to them or I know how to play in those kinds of conditions obviously because in Austria, we have many days like that. And then from junior times and when I started to play professional on the futures in March in Croatia or Czech Republic, there were many tournaments with similar conditions. Cold, heavy balls.

"So, it's not really something new for me, and it helps against guys like Marin, because it's a little bit easier to return many serves back in the court and to run down almost every ball. So, I like these conditions. And anyway, we have to do the best we can, because it's a very special year."

There was more disappointment for the small number of home fans as Moutet followed Monfils in tumbling out of the tournament, albeit in significantly more dramatic fashion.

Moutet will have been expected to come through his clash with Giustino with little difficulty but was outlasted in an epic that was finally settled after six hours and five minutes of play.

Asked for his thoughts on the contest, Moutet said: "My feelings, I don't know. We played a really long match, so I don't know. I don't feel anything in my body right now. I feel empty."