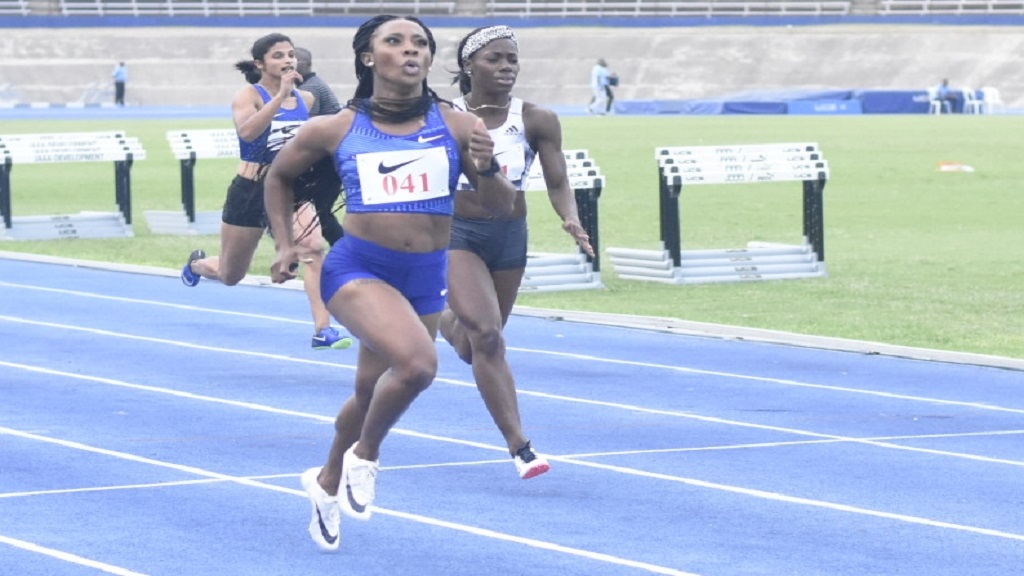 Shelly-Ann Fraser-Pryce wins section two of the women's 200m at the Nike Seniors Link Up Track and Field Meet on Saturday, May 4, 2019 at the National Stadium. (PHOTOS: Marlon Reid).

Two-time Olympic gold medallist Shelly-Ann Fraser recorded an easy victory in the women's 200m at the Nike Seniors Link Up Track and Field Meet on Saturday at the National Stadium.

Fraser-Pryce, competing in section two, had a very good reaction time and her victory was never in doubt. The MVP sprinter, who was running the 200m event for the first time since 2016,  entered the stretch run in command and cruised home in 23.08 seconds (-1.3 mps).

"I was a little anxious and little nervous all of that in one and that expected, but I was more focus on executing and having a good run and I think at the end of the day even though the wind wasn't strong I was still able to execute at least for the first 150m of the race, so I'm pretty excited about that and now I turn my attention to the World Relays where I will be running the 4x200," said Fraser-Pryce.

The Sprintec pair of Sashalee Forbes (23.34) and Sherone Simpson (23.51) finished second and third.

Section one was won by Nikiesha Brooks of Cameron Blazers in 24.96 seconds, the sixth fastest time overall.

Fraser-Pryce's victory came 21 days after she sped to a meet record 11.20 seconds to win the women's 100m at the Grenada Invitational at the Kirani James Stadium.

Dwyer's Sprintec teammate Brendon Rodney, who also competed in section six, finished second in 20.97. The Sprintec duo were the only athletes to recorded sub 21 seconds.

Olympic 400m bronze medallist Shericka Jackson of MVP Track Club, who also competed in section two, was only interested in the first 300m of the race.

The 24-year-old Jackson ran the first 300m very hard to enter the straight with a commanding lead. However, she cut her speed and then casually trotted across the line, finishing sixth and last in the section in 54.11 seconds, a time which handed her ninth overall.

Demish Gaye of Sprintec won the men's 400m in 45.41. MVP Track Club's Rusheen McDonald (45.50) and DeVaughn Baker (46.33) of the University of Technology finished second and third.

Tajay Gayle was also in good form, as the University of Technology student won the men's long jump with a personal best effort of 8.30m (0.5mps), the second-best jump in the world this season. Luvo Manyonga of South Africa is the world leader with 8.35m

Gayle had entered the meet with a personal best of 8.24m, which was achieved inToronto, Canada on August 12, 2018.

Gayle's new personal best of 8.30m jump ranked him as the third best Jamaican on the all-time long jump list behind national record James Beckford (8.62m, achieved in Orlando, Florida on April 5, 1997) and Alain Bailey (8.35m, achieved in Knoxville, Tennessee on May 15, 2010).

Second-place Shawn-D Thompson (8.17m; +2.1mps) and third-place Emanuel Archibald (8.13; +3.2mps) of the University of the West Indies, also soared over eight metres, but their efforts were above the allowable wind reading limit of +2.0 mps

The meet was organised by MVP Track Club in response to the cancellation of the 15th staging of the Jamaica International Invitational (JII) meet, which was scheduled to take place on the day.

The JII meet is usually the first meet of the IAAF World Challenge, which takes place across nine cities in nine countries on three continents.

MVP Track Club president Bruce James had pointed out that "my team and I decided to host the meet at the same time, date and location. Our primary motivation is to give the top tier athletes who had prepared for the JII an opportunity to compete, especially since a number of them will be traveling to the IAAF World Relays in less than a week.

The IAAF World Relay Championships will take place in Yokohama, Japan from May 11-12.

The World Relays will be used as qualification for the 2019 World Athletics Championships in Doha later this year.

The JII meet was cancelled because of insufficient funding.

According to the organisers, the meet made a name for itself by the numerous world-class athletes which it has attracted from across the globe, and the annual staging was only made possible through sponsorship from the private and public sectors.

Athletes fees consumed the bulk of that sponsorship, organisers said.

Garth Gayle, a member of the organising committee told Sportsmax.TV that they were working feverishly to make the meet happen this year. Less than 48 hours later, an advisory was posted on the meet’s website that there would be no track meet this year.

On Monday, a statement over the signature of Dr. Warren Blake, the Chairman of the Organising Committee was released to the media which confirmed the cancellation and offered some reasons why.

“The current reality is that the level of sponsorship promised/received is insufficient to allow us to stage anything but a watered down version of what is expected of the Jamaica International Invitational Meet,” the statement read.

“Accordingly, we regret to inform, that after consultation with the International Association of Athletics Federations (IAAF) it has been decided to cancel all plans for this year’s staging of the JIIM.”