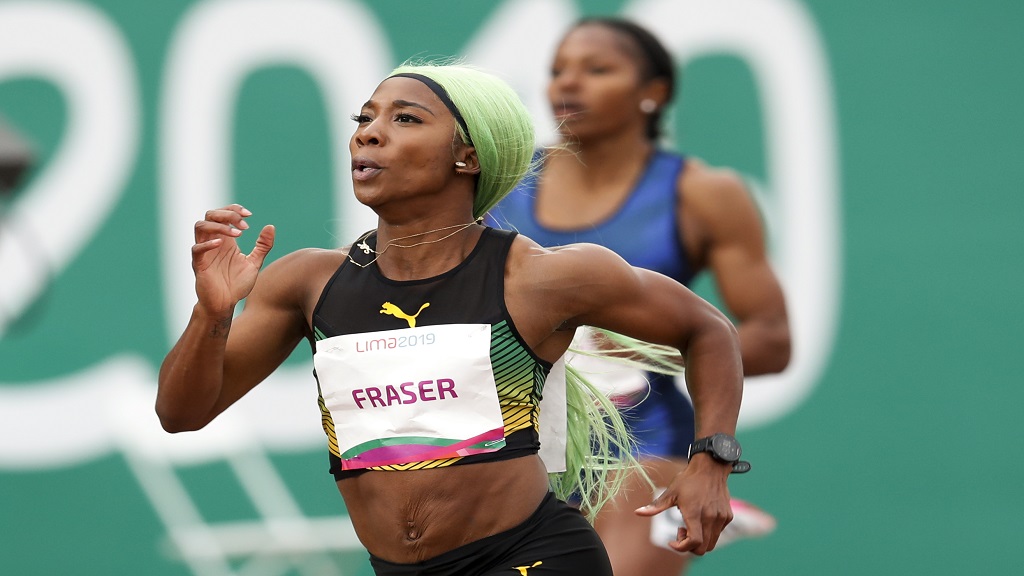 Shelly-Ann Fraser-Pryce of Jamaica runs to win the gold medal in the women's 200m final during the athletics at the Pan American Games in Lima, Peru, Friday, Aug. 9, 2019. (AP Photo/Moises Castillo).

Two-time Olympic gold medallist Shelly-Ann Fraser-Pryce produced one of the highlights of the fourth day of track and field in Lima, Peru on Friday by adding the Pan American Games 200m title to her illustrious collection with a 22.43 (-0.1 m/s) performance to break the previous games record of 22.45 set by USA’s Evelyn Ashford in 1979.

The 32-year-old from Kingston, world-ranked No.2 at 100m, and multiple Olympic and world champion, dominated the race entirely, running a smooth curve and finishing off with her traditional and powerful stride, even relaxing a bit over the last 10 metres.

“I want to think that I’m much better at 100m, but the 200m represent a bigger challenge for me”, said Fraser-Pryce, whose hair coloured green for the occasion. “I’m working on getting better at 200m and I’m also very happy to win this title for my country. I knew it was cold, but it was cold for everyone, not just for me, so I just wanted to execute the first 100m like my coach told me to do. Now, I thank god that I finished healthy and I can go back home and put on some more training.”

Fraser-Pryce dedicated the victory to her son Zyon, who celebrated his second birthday a couple of days before the final.

Fraser-Pryce’s victory was, curiously enough, the first for Jamaica at the Pan American Games. Brazil’s Vitória Rosa, world ranked No.16, was second with a personal best of 22.62, while Bahamas’ Tynia Gaither was third with 22.76. 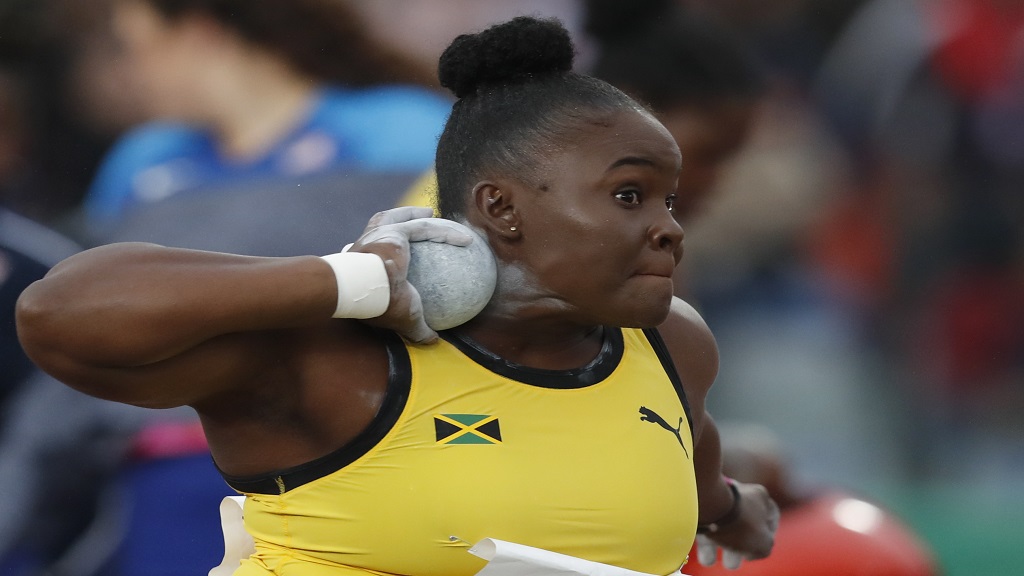 Danniel Thomas of Jamaica throws to win the gold medal in the women's shot put.

Fraser-Pryce's teammate Danniel Thomas-Dodd provided the sixth gold for Jamaica by winning the shot put with 19.55m, setting a new games and national record. Thomas-Dodd, world ranked No.4, achieved the winning mark in her final throw of the day with the victory already assured. Her gold was also the first for her nation at this event. Canada’s Brittany Crew was second with a personal best and national record of 19.07m, while USA’s Jessica Ramsey was third with a season’s best of 19.01m.

Jamaica's Lloydricia Cameron had a season-best 17.57m but it was only good enough for seventh place.

Jamaica secured two other medals on the day through Aisha Praught-Leer and Shanieka Rickets, who both got silver.

Nikki Hiltz won the race in 4:07.14, the second US gold for the day (and third of the athletics competition).

Venezuela’s Yulimar Rojas produced one of the most impressive performances on the day, winning the triple jump with a 15.11m leap, a world leader, Games’ and national record.

The four medals on the day pushed Jamaica to 13th in the medal standings with a haul of 18 (6 gold, 6 silver and 6 bronze). Track and field accounted for 16 of the medals.

In track and field, Jamaica are atop the gold medal table entering the final day on Saturday with six gold, five silver and five bronze for a medal haul of 16, which ranked them second by total.

Brazil, which swept the sprint relays, are second in the gold medal table with five gold, five silver and three bronze for a medal haul of 13, which ranked them third by total.

Cuba are third in the gold medal table with five gold, one silver and one bronze for a medal haul of seven, which ranked them sixth by total.

The United States are fourth in the gold medal table with three gold, 10 silver and 11 bronze for a medal haul of 24, which ranked them first by total.