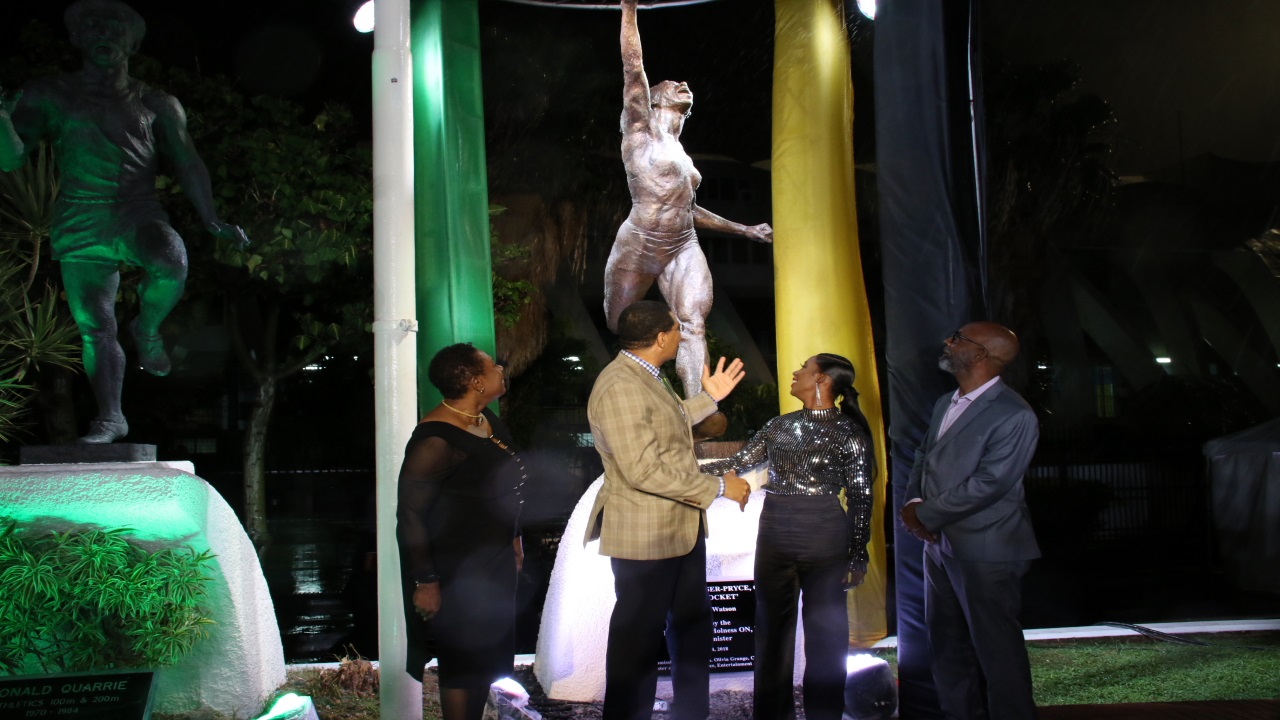 Not even the heavy downpour of rain, associated with a broad Trough across the western Caribbean, was enough to deter government officials, diplomats, sporting officialdom and loyal fans from turning out at the National Stadium on Sunday for the unveiling of the statue for  world and Olympic sprint champion Shelly-Ann Fraser-Pryce.

Fraser-Pryce's statue was mounted  at Statue Park in the National Stadium following a special ceremony.

The various speakers, showered Fraser-Pryce, the Beijing 2008 and London 2012 Olympic 100-metre gold medallist, with praises during the ceremony, which lasted just over two hours.

The unveiling of Fraser-Pryce's statue

In outlining the day in 2008 when Fraser-Pryce won the first of her two Olympic gold medals, Holness said in winning the event, she epitomizes the Jamaican term, “little but talawah”.

Holness said that Fraser-Pryce’s accomplisments at the international level and the many other achievements by Jamaicans in other disciplines, primarily accounts for brand Jamaica.

“They are our national treasure. Shelly’s story is the story of which dreams are made,” Holness said.

Grange said, “Shelly has put greater sheen on brand Jamaica. Her story is one of the many narratives of the Jamaican women, who remains steadfast in her ability to rise above birth in lowly circumstance and become a model for girls and young women from similar circumstances.”

Robinson said that Fraser-Pryce has left many memories with the most iconic being the pumping fist after winning the gold medal in the 100m at Beijing 2008, which is depicted in the statue.

Blake said the statues for sporting heroes have helped Jamaica to be among the countries that immortalised their great men and women by honouring them in this manner.

James, who also manages Fraser-Pryce, gave a compelling story about the athlete.

He said that in 2002 when Fraser-Pryce went on her first overseas trip as a part of Wolmer’s Penn Relays team, their second-place finish in the Small School category inspired then president of the alumni association, Jean Coke, to carry the team shopping and told them to pick up anything they wanted.

James said that while the other athletes took up a basket full of items, Fraser-Pryce selected a single item, which when questioned said that it was what her mother, Maxine, would have wanted.

Pressed by Coke to get something for herself, James said that Fraser-Pryce went back and took up only one other item. He said that the humility shown by Fraser-Pryce bestowed Coke’s blessing on her as she took full responsibility for the athlete's schooling afterwards, believing that she was destined for greatness.

According to James, Coke died in March 2008 and on her memorial day Fraser-Pryce returned to the Penn Relays and won the collegiate gold medal.

James said after Fraser-Pryce was presented with her prize, he advised her to dedicate it to the memory of Coke. However, James said Fraser-Pryce told him that she has a better medal in mind to dedicate to her mentor. She won the Olympic gold later that year.

Fraser-Pryce used the occasion to thanks those who have made her dreams possible.

She said, “early in my journey, I wasn’t a model athlete, however, once I found out the power I had in my legs and was convinced that hard work is the key to success, I bought a stake into my own vision for my future.

“We all have our dreams and sometimes we do not get to pursue them, however, if you are alive you can still be able to achieve them. A delayed dream doesn’t mean a dream denied."

The bronze statue — to the scale of one and quarter life size — was designed by renowned sculptor Basil Watson.

Watson has been engaged by the Ministry of Culture, Gender, Entertainment and Sport to design statues of four of Jamaica’s outstanding sports stars under the Jamaica 55 Legacy Programme.

The statue in honour of Fraser-Pryce is the second to be completed under the programme.  The first statue of Usain Bolt was completed and installed last December.  The remaining statues of Veronica Campbell Brown and Asafa Powell are now in the design stage.

Fraser-Pryce became the first Jamaican woman to win a 100-metre Olympic gold medal. She achieved the feat at the 2008 Summer Olympics in Beijing.

In 2009, Fraser-Pryce won the 100-metre gold medal at the 2009 World Championships in Berlin, Germany, becoming the second female sprinter in history to simultaneously hold both Olympic and world 100-metre titles.

At the 2012 Summer Olympic Games in London, Fraser-Pryce won her second straight 100-metre Olympic gold medal with a time of 10.75 seconds, beating American track star Carmelita Jeter. The win made Fraser-Pryce the first woman to repeat 100-metre victories since American Gail Devers (in 1992 and 1996).

Fraser-Pryce missed the 2016-2017 season to have her son Zyon and to recover from a nagging toe injury that played a part in her failure to become the first woman in history to win three consecutive Olympic 100-metre titles.

Shelly-Ann Fraser-Pryce's statue to be unveiled on Sunday