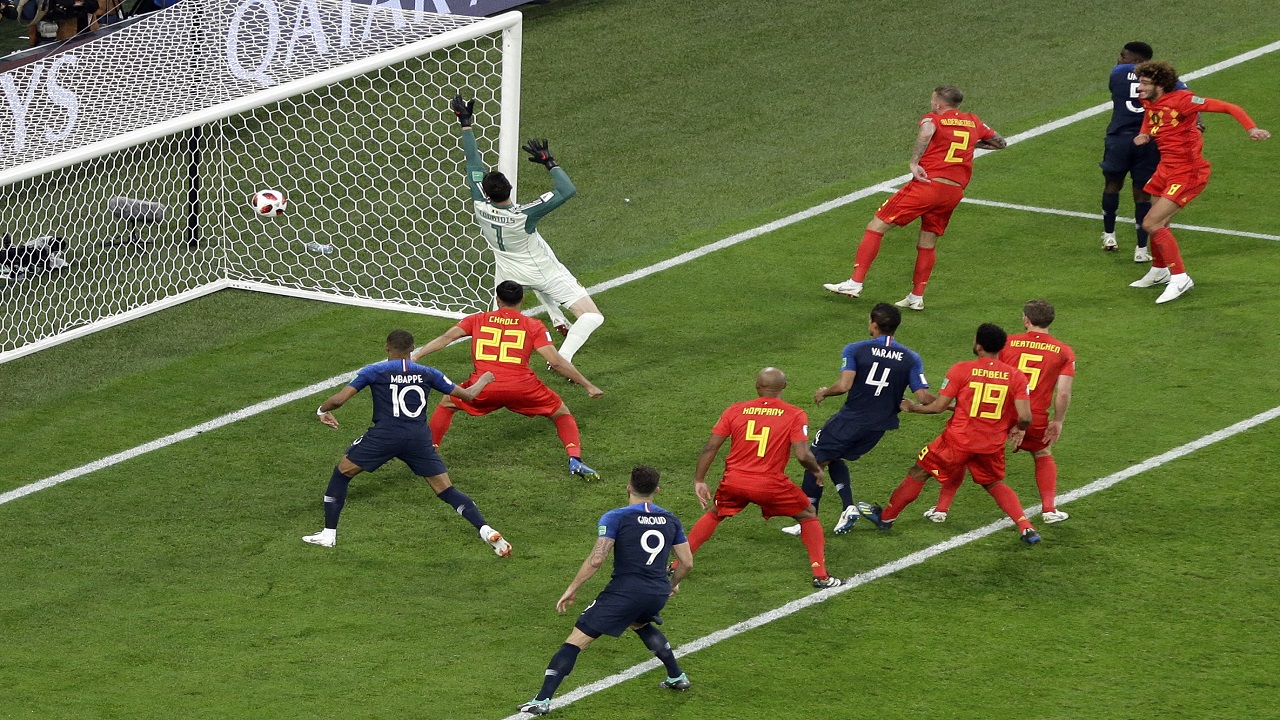 France's Samuel Umtiti, 2nd right, scores the only goal of the match during the semifinal game against Belgium at the 2018 football World Cup in the St. Petersburg Stadium in St. Petersburg, Russia, Tuesday, July 10, 2018. (AP Photo/Thanassis Stavrakis).

Samuel Umtiti was the unlikely hero as France reached the World Cup final for the third time in 20 years courtesy of a 1-0 win over Belgium in St Petersburg on Tuesday.

Defender Umtiti headed home a corner from Antoine Griezmann in the 51st minute to settle the all-European tie, booking Les Bleus a trip to Moscow and a clash against either Croatia or England.

Goalkeepers Hugo Lloris and Thibaut Courtois both made smart saves to make sure an intriguing game remained scoreless at the interval.

However, Umtiti popped up with the game's telling moment early in the second half, nodding the ball home to score his third international goal.

Belgium pushed hard for an equaliser but Roberto Martinez watched on as his team suffered their first defeat in 25 outings, ending their hopes of winning the tournament for the first time in history as their so-called golden generation came up short.

Beaten finalists at Euro 2016 on home soil, France will aim to go one better in Russia and emulate the successful squad of 1998 which included Didier Deschamps, who could emulate Mario Zagallo and Franz Beckenbauer by winning the World Cup as both a player and manager.

With Thomas Meunier suspended, Belgium shifted to a back four as Martinez selected Nacer Chadli on the right.

Still, the change in shape did not appear to bother the tournament's top-scorers in an absorbing first half, both teams threatening a breakthrough as they refused to be overawed by the occasion.

Eden Hazard twice went close, narrowly missing the target with a low, left-footed drive before seeing a curler with his right deflected over by the head of centre-back Raphael Varane.

Lloris' full-length dive kept out a first-time strike from Tottenham colleague Toby Alderweireld, while Courtois reacted quickly to block Benjamin Pavard's attempt from a tight angle at the other end.

While the full-back at least hit the target, Olivier Giroud failed to test Courtois when presented with a clear sight of goal by Kylian Mbappe's volleyed cross, poking his attempt well wide under pressure.

However, France needed just six minutes after the break to edge ahead.

After Vincent Kompany's block turned away Giroud's shot, Griezmann's inswinging delivery to the front post was turned in by Umtiti, who beat Marouane Fellaini to head beyond Courtois.

Martinez - who had seen his team rally from a two-goal deficit in their last-16 tie against Japan - reacted to the goal by sending on Dries Mertens in place of Mousa Dembele.

The substitute offered a threat from Belgium's right wing too, with one teasing cross from the flank seeing Fellaini narrowly miss the target with a header as he looked to make amends for his part in the opener.

Axel Witsel did test Lloris from distance but France succeeded where Brazil had failed in the last round, standing firm to stifle their neighbours in a nervy finish and book a trip to Moscow.