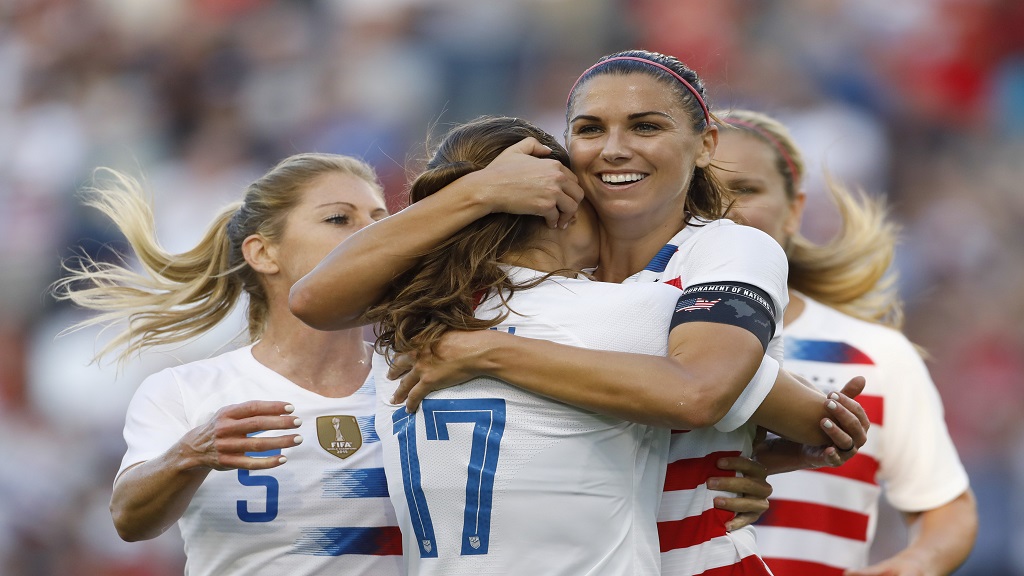 In this July 26, 2018, file photo, U.S. forward Alex Morgan, second from right, celebrates her hat trick with defender Tobin Heath (17) and other teammates during the second half of a Tournament of Nations football match against Japan in Kansas City, Kan.

The Women's World Cup kicks off Friday in Paris. Twenty-four teams will traverse France for the next month in pursuit of football's most prestigious trophy. Here are five players to watch during the tournament:

ALEX MORGAN, United States: Morgan was named the U.S. national team's Player of the Year after she closed out 2018 with 18 goals in 19 games. She had seven goals during the CONCACAF World Cup qualifying tournament alone.

Morgan is a proven scorer: She also earned Player of the Year honors in 2012 when she had 28 goals and 21 assists, and helped the national team win an Olympic gold medal. Mia Hamm is the only other player to have 20-plus goals and assists during a single season.

The 29-year-old forward, who will have a birthday during the tournament in France, is playing in her third World Cup. She was the youngest player on the 2011 World Cup team, scoring a goal in the final match against Japan.

She scored her 100th goal with the national team in April — not bad for a late-bloomer who didn't play club soccer until age 14.

Morgan, who also plays with the National Women's Soccer League's Orlando Pride, was named this year to Time Magazine's 100 most influential people list.

CHRISTINE SINCLAIR, Canada: Sinclair is the most prolific scorer ever in Canadian football, and with 181 career goals she's edging closer to former U.S. star Abby Wambach, who holds the international record — among men or women — with 184.

Sinclair has been the face of the Canadian women's team for 19 years. Now 35, this tournament will be the soft-spoken captain's fifth, and likely final, World Cup.

Canada has won bronze medals at the past two Olympics. But the closest the Canadians have come to a podium finish at the World Cup was in 2003, when they finished fourth.

From Burnaby, British Columbia, Sinclair won two NCAA championships at the University of Portland. She's stayed in the Pacific Northwest and plays with the NWSL's Portland Thorns.

Marta is playing in her fifth World Cup, She has also played in four Olympics for Brazil, but so far, a championship has eluded her in both tournaments. The 33-year-old has the most World Cup goals with 15, one better than both Wambach and Germany's Birgit Prinz.

Growing up in a small town in Brazil, Marta played soccer with the boys. But her talent was recognized quickly and she left home to play soccer when she was just 14.

At the 2016 Olympics in her native country, she played with so much passion that fans crossed out Neymar's name on their No. 10 jerseys and wrote in Marta's.

She had a setback last week when she injured her left thigh in practice but she has since returned to training.

SAMANTHA KERR, Australia: There are few players, if any, that are as dynamic as Kerr with the ball. She's also known for her signature backflip following goals.

This will be the 25-year-old's third World Cup, and the Australians hope to improve on their surprising run to the quarterfinals in the 2015 tournament.

Since making her debut with the Australian national team at 15, Kerr has collected 31 goals in 77 games. As captain of the team, known as the Matildas, Kerr has been called "fearless' by coach Ante Milicic.

Kerr plays soccer year-round with the Chicago Red Stars of the NWSL and with the Perth Glory of Australia's W-League. Last season, she led the NWSL in goals for the second straight year with 16.

DZSENIFER MAROZSAN, Germany: Marozsan is the inspirational story of the World Cup, having returned to the game after a pulmonary embolism kept her sidelined for several months last year.

Marozsan grabbed international attention at the 2016 Olympics in Brazil when she scored the winning goal against Sweden. The 27-year-old has 32 goals in 89 appearances overall with Germany.

At just under 15, she became the youngest player to debut in the Bundesliga. She currently plays for Lyon and has been the French player of the year for the past two seasons.

Lyon has won the French league and the Champions League for the past three seasons. A World Cup championship is the only major title Marozsan is missing.