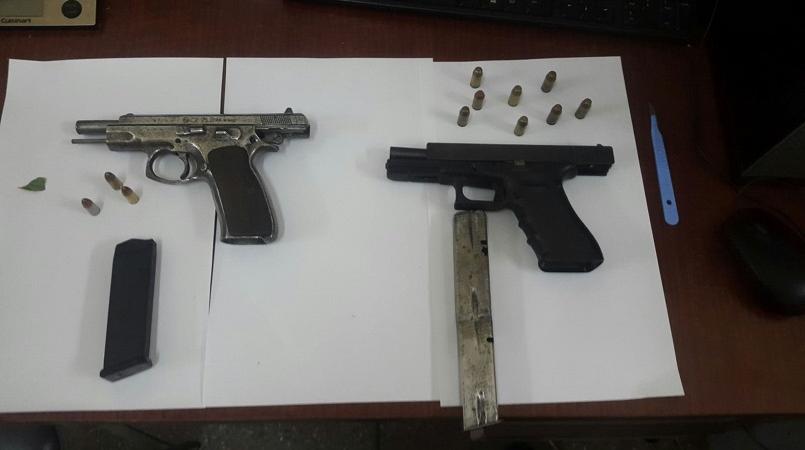 Four persons are now in police custody following the seizure of four firearms and 35 assorted rounds of ammunition during operations across four parishes on Friday, July 14.

Charged with Illegal Possession of Firearm and Ammunition are:

The first seizure occurred in Port Maria, St. Mary about 4;30 p.m. Detectives from the Narcotics Division were on operation in the car park when Irving was accosted and searched.  A bag he was carrying was also searched and found to contain one Bersa SA 9mm pistol and seven 9mm cartridges. He was then taken custody.

The next seizure occurred about 9:15 p.m., during a snap raid in the Church Pen community of Old Harbour in St. Catherine.

Williams was accosted and a bag he was carrying searched. One .38 revolver and a magazine containing six .38 rounds of ammunition were found inside the bag. He was subsequently arrested.

The gun finds in St. Ann and Westmoreland took place about 11:20 p.m. The detectives in the St. Ann were on special operations in the Mansfield Heights community when two men were searched. One .380 Smith and Wesson pistol containing eight .380 rounds of ammunition was taken from the waistband of one of the men. He was subsequently arrested. The other man escaped.

Over in Westmoreland during a raid at a bar on Mint Road in Grange Hill by detectives from the Morgan’s Bridge Police, a patron dropped a firearm. The firearm was retrieved and found to be a Taurus 9mm pistol containing fourteen 9mm rounds of ammunition. The male patron was subsequently taken into custody.

The identities of these men are being withheld pending further investigations.

Anyone with information that may be able to assist the Police in their investigations is being asked to contact the Police 119 emergency number, Crime Stop at 311, 811, the nearest Police station or via the stay alert app.