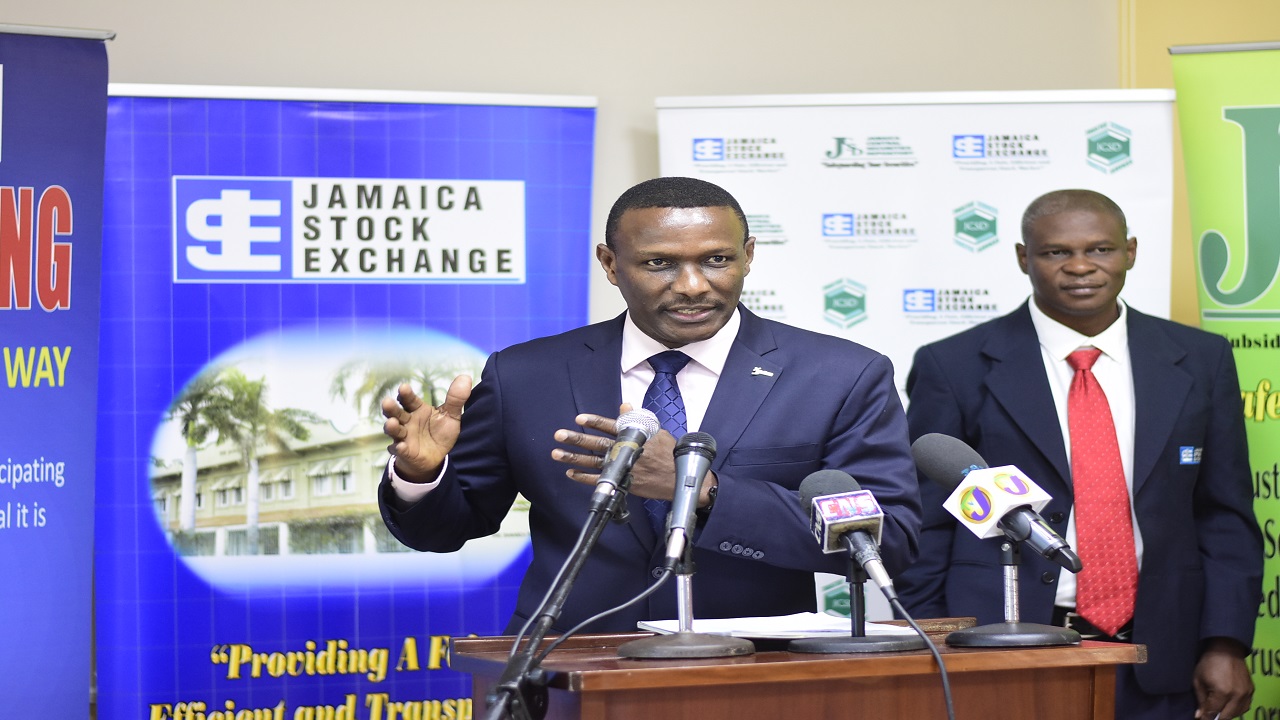 CEO of FosRich Limited Cecil Foster speaking at at the company's listing ceremony in December 2017.

FosRich Limited and Grace Kennedy (GK) Pension Scheme have signed a financing contract for the lighting supplier's expansion into a new warehousing facility.

The new warehouse, to be located on land at 76 Molynes Road in Kingston, will be owned by GK Pension Scheme, which is managed by Proven Wealth Limited (PWL).

The groundbreaking for the venture is expected soon.

Richard Gordon, vice president and general fund manager at Proven Wealth, said the warehouse is projected for delivery in three months. The 26,000-foot square foot facility will be used for storage by Fosrich, he stated.

Gordon did not disclose the development cost for the warehouse.

Fosrich, established in 1993, is a distributor of lighting, electrical and solar energy products. It manufactures some products and distributes global brands including Philips Lighting, Victron Energy, Siemens, NEXANS and General Electric (GE).

Cecil Foster told Loop News, "It’s a multi-million dollar warehousing and distribution centre which will allow us to digitize inventory. Customer service will improve as products will be easily located and shipped out. We will no longer be unable to find products, so service will improve."

Speaking at the signing ceremony, he described the agreement as,  “another milestone in the life of our company.”

The increase in revenue was attributed to access to additional funding and growth of the industrial segment of the business.

Previously, inventory levels cited was described as "constrained by tight financing, but it was projected at year-end 2018 that access to additional financing would aid in the expansion of the inventory levels which would assist in significantly in meeting demand."

At the contract signing, Foster said he welcomed “the confidence that our partners have placed in our operations. This year marks 25 years since FosRich has been serving the people of Jamaica, and the new project represents an initiative to expand our facilities to provide for our widening product range and to fully demonstrate top quality service to our customers.”

Chairman of the GK Pension Scheme, Douglas Orane said the project was a first for the pension fund.

He noted, “This is the first time that the GK Pension Scheme will be functioning as a real estate developer, and we are pleased to be involved in this initiative, which is a demonstration of confidence, not only in FosRich’s potential for considerable growth and development but also an investment in Jamaica’s future. FosRich and the pension scheme are developing a relationship that we see continuing for the long term.”

He added, “Alliance with commercial entities is a future avenue for the growth and development of the scheme. This is an opportunity that other pension funds could explore to actively support the accelerated growth of the Jamaican economy.”

Amendments to pension regulations passed in the House of Parliament this year now allow pension funds to invest more heavily than before in real estate. However, Gordon from Proven Wealth said the current project is unrelated to changes in the law.

Orane noted,  “Investments of this type will directly benefit all the members of the pension scheme, both pensioners and active members since new, valuable income-earning real estate assets are being created that will produce both steady income and capital appreciation for decades to come.”