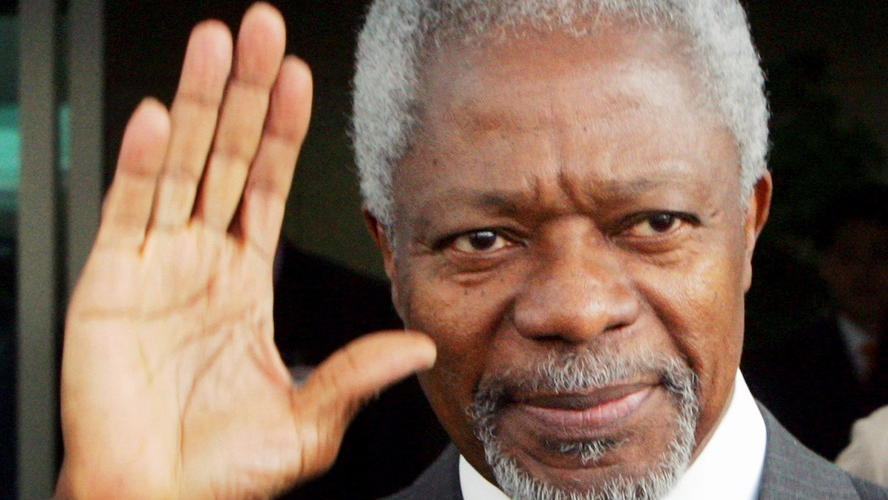 In this Sunday, May 14, 2006 file photo U.N. Secretary-General Kofi Annan waves as he gets into a car upon his arrival at the Incheon International Airport, west of Seoul, South Korea. Annan, one of the world's most celebrated diplomats and a charismatic symbol of the United Nations who rose through its ranks to become the first black African secretary-general, has died. He was 80. (AP Photo/Ahn Young-joon, Fil

Kofi Annan, one of the world's most celebrated diplomats and a charismatic symbol of the United Nations who rose through its ranks to become the first black African secretary-general, has died. He was 80.

His foundation announced his death in Switzerland on Saturday in a tweet , saying he died after a short unspecified illness.

"Wherever there was suffering or need, he reached out and touched many people with his deep compassion and empathy," the foundation said.

Annan spent virtually his entire career as an administrator in the United Nations. His aristocratic style, cool-tempered elegance and political savvy helped guide his ascent to become its seventh secretary-general, and the first hired from within. He served two terms from January 1, 1997, to December 31, 2006, capped nearly mid-way when he and the U.N. were jointly awarded the Nobel Peace Prize in 2001.

During his tenure, Annan presided over some of the worst failures and scandals at the world body, one of its most turbulent periods since its founding in 1945. Challenges from the outset forced him to spend much of his time struggling to restore its tarnished reputation.

His enduring moral prestige remained largely undented, however, both through charisma and by virtue of having negotiated with most of the powers in the world.

When he departed from the United Nations, he left behind a global organisation far more aggressively engaged in peacekeeping and fighting poverty, setting the framework for the U.N.'s 21st-century response to mass atrocities and its emphasis on human rights and development. 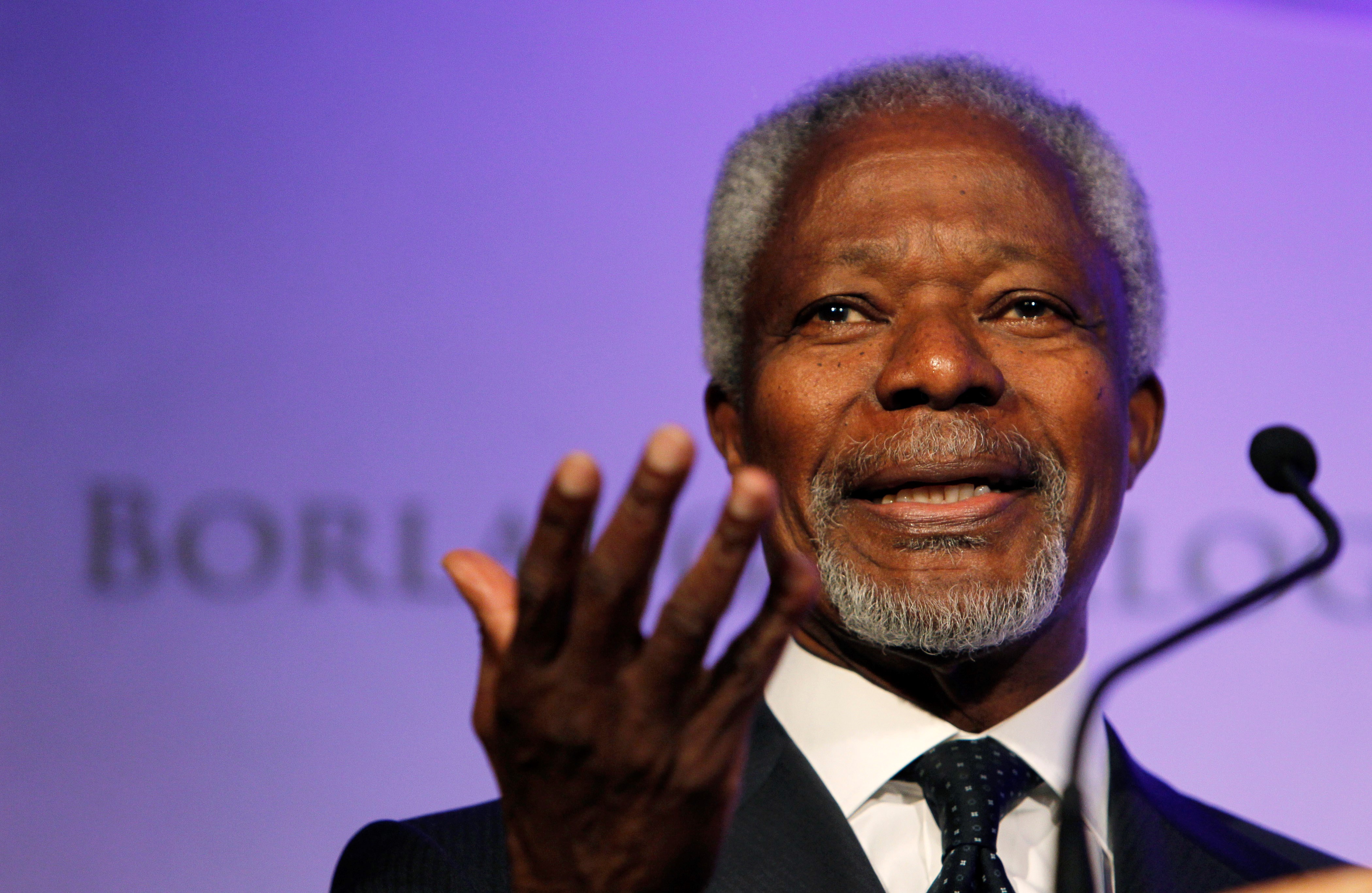 "Kofi Annan was a guiding force for good," current U.N. Secretary-General Antonio Guterres said. "It is with profound sadness that I learned of his passing. In many ways, Kofi Annan was the United Nations. He rose through the ranks to lead the organisation into the new millennium with matchless dignity and determination."

Even out of office, Annan never completely left the U.N. orbit. He returned in special roles, including as the U.N.-Arab League's special envoy to Syria in 2012. He remained a powerful advocate for global causes through his eponymous foundation.

Annan took on the top U.N. post six years after the collapse of the Soviet Union and presided during a decade when the world united against terrorism after the September 11 attacks — then divided deeply over the US.-led war against Iraq. The US. relationship tested him as a world diplomatic leader.

"I think that my darkest moment was the Iraq war, and the fact that we could not stop it," Annan said in a February 2013 interview with TIME magazine to mark the publication of his memoir, "Interventions: A Life in War and Peace."

"I worked very hard — I was working the phone, talking to leaders around the world. The U.S. did not have the support in the Security Council," Annan recalled in the videotaped interview posted on The Kofi Annan Foundation's website.

"So they decided to go without the council. But I think the council was right in not sanctioning the war," he said. "Could you imagine if the U.N. had endorsed the war in Iraq, what our reputation would be like? Although at that point, President (George W.) Bush said the U.N. was headed toward irrelevance because we had not supported the war. But now we know better."

Despite his well-honed diplomatic skills, Annan was never afraid to speak candidly. That didn't always win him fans, particularly in the case of Bush's administration, with whom Annan's camp spent much time bickering. Much of his second term was spent at odds with the United States, the U.N.'s biggest contributor, as he tried to lean on the nation to pay almost $2 billion in arrears.

Kofi Atta Annan was born April 8, 1938, into an elite family in Kumasi, Ghana, the son of a provincial governor and grandson of two tribal chiefs.

He shared his middle name Atta — "twin" in Ghana's Akan language — with a twin sister, Efua. He became fluent in English, French and several African languages, attending an elite boarding school and the University of Science and Technology in Kumasi. He finished his undergraduate work in economics at Macalester College in St. Paul, Minnesota, in 1961. From there he went to Geneva, where he began his graduate studies in international affairs and launched his U.N. career.

Annan married Titi Alakija, a Nigerian woman, in 1965, and they had a daughter, Ama, and a son, Kojo. He returned to the U.S. in 1971 and earned a master's degree at the Massachusetts Institute of Technology's Sloan School of Management. The couple separated during the 1970s and, while working in Geneva, Annan met his second wife, Swedish lawyer Nane Lagergren. They married in 1984.

Annan worked for the U.N. Economic Commission for Africa in Ethiopia, its Emergency Force in Egypt, and the office of the High Commissioner for Refugees in Geneva, before taking a series of senior posts at U.N. headquarters in New York dealing with human resources, budget, finance, and staff security.

He also had special assignments. After Iraq invaded Kuwait in 1990, he facilitated the repatriation from Iraq of more than 900 international staff and other non-Iraqi nationals, and the release of western hostages in Iraq. He led the initial negotiations with Iraq for the sale of oil in exchange for humanitarian relief.

Just before becoming secretary-general, Annan served as U.N. peacekeeping chief and as special envoy to the former Yugoslavia, where he oversaw a transition in Bosnia from U.N. protective forces to NATO-led troops.

The U.N. peacekeeping operation faced two of its greatest failures during his tenure: the Rwanda genocide in 1994 and the massacre in the Bosnian town of Srebrenica in July 1995.

In both cases, the U.N. had deployed troops under Annan's command, but they failed to save the lives of the civilians they were mandated to protect. Annan offered apologies but ignored calls to resign by U.S. Republican lawmakers. After became secretary-general, he called for U.N. reports on those two debacles — and they were highly critical of his management.

As secretary-general, Annan forged his experiences into a doctrine called the "Responsibility to Protect," that countries accepted — at least in principle — to head off genocide, crimes against humanity, ethnic cleansing and war crimes.

In 1998, he helped ease a transition to civilian rule in Nigeria and visited Iraq to try to resolve its impasse with the Security Council over compliance with weapons inspections and other matters. The effort helped avoid an outbreak of hostilities that seemed imminent at the time.

In 1999, he was deeply involved in the process by which East Timor gained independence from Indonesia, and started the "Global Compact" initiative that has grown into the world's largest effort to promote corporate social responsibility.

Annan was the chief architect of what became known as the Millennium Development Goals and played a central role in creating the Global Fund to Fight AIDS, Tuberculosis and Malaria and the U.N.'s first counter-terrorism strategy.

Annan's uncontested election to a second term was unprecedented, reflecting the overwhelming support he enjoyed from both rich and poor countries. Timothy Wirth, president of the United Nations Foundation, which disburses Ted Turner's $1 billion pledge to U.N. causes, hailed "a saint-like sense about him."

In 2005, Annan succeeded in establishing the Peacebuilding Commission and the Human Rights Council. But that year, the U.N. was facing almost daily attacks over allegations about corruption in the U.N. oil-for-food program in Iraq, bribery by U.N. purchasing officials and widespread sex abuse by U.N. peacekeepers — an issue that would only balloon in importance after he left office.

It emerged that Annan's son, Kojo, had not disclosed payments he received from his employer, which had a $10 million-a-year contract to monitor humanitarian aid under the oil-for-food program. The company paid at least $300,000 to Kojo so he would not work for competitors after he left.

An independent report criticised the secretary-general for being too complacent, saying he should have done more to investigate matters even if he was not involved with the awarding of the contract.

World leaders agreed to create an internal U.N. ethics office, but a major overhaul of the U.N.'s outdated management practices and operating procedures were left to Annan's successor, Ban Ki-moon.

Before leaving office, Annan helped secure a truce between Israel and Hezbollah in 2006 and mediated a settlement of a dispute between Cameroon and Nigeria over the Bakassi peninsula.

At a farewell news conference, Annan listed as top achievements the promotion of human rights, the fighting to close the gap between extreme poverty and immense wealth, and the U.N. campaign to fight infectious diseases like AIDS.

He never took disappointments and setbacks personally. And he kept his view that diplomacy should take place in private and not in the public forum.

In his memoir, Annan recognised the costs of taking on the world's top diplomatic job, joking that "SG," for secretary-general, also signified "scapegoat" around U.N. headquarters.

After leaving his high-profile U.N. perch, Annan didn't let up. In 2007, his Geneva-based foundation was created. That year he helped broker peace in Kenya, where election violence had killed over 1,000 people.

He also joined The Elders, an elite group of former leaders founded by Nelson Mandela, eventually succeeding Desmond Tutu as its chairman after a failed interlude trying to resolve Syria's rising civil war.

"His quiet advice on how best to defuse impending crises was in constant demand from all corners of the globe, in particular from Africa," deputy chair of The Elders, former Norwegian Prime Minister Gro Harlem Brundtland, said Saturday.

As special envoy to Syria in 2012, Annan won international backing for a six-point plan for peace. The U.N. deployed a 300-member observer force to monitor a cease-fire, but peace never took hold and Annan was unable to surmount the bitter stalemate among Security Council powers. He resigned in frustration seven months into the job, as the civil war raged on.

He also remained a vocal commentator on troubles like the refugee crisis; promoted good governance, anti-corruption measures and sustainable agriculture in Africa; and pushed efforts in the fight against illegal drug trafficking.

Annan retained connections to many international organisations. He was chancellor of the University of Ghana, a fellow at New York's Columbia University, and professor at the Lee Kuan Yew School of Public Policy in Singapore.

His homeland of Ghana was shaken by his death. "One of our greatest compatriots," President Nana Akufo-Addo said.

VS Naipaul is dead

Stephen Hawking, best-known physicist of his time, has died