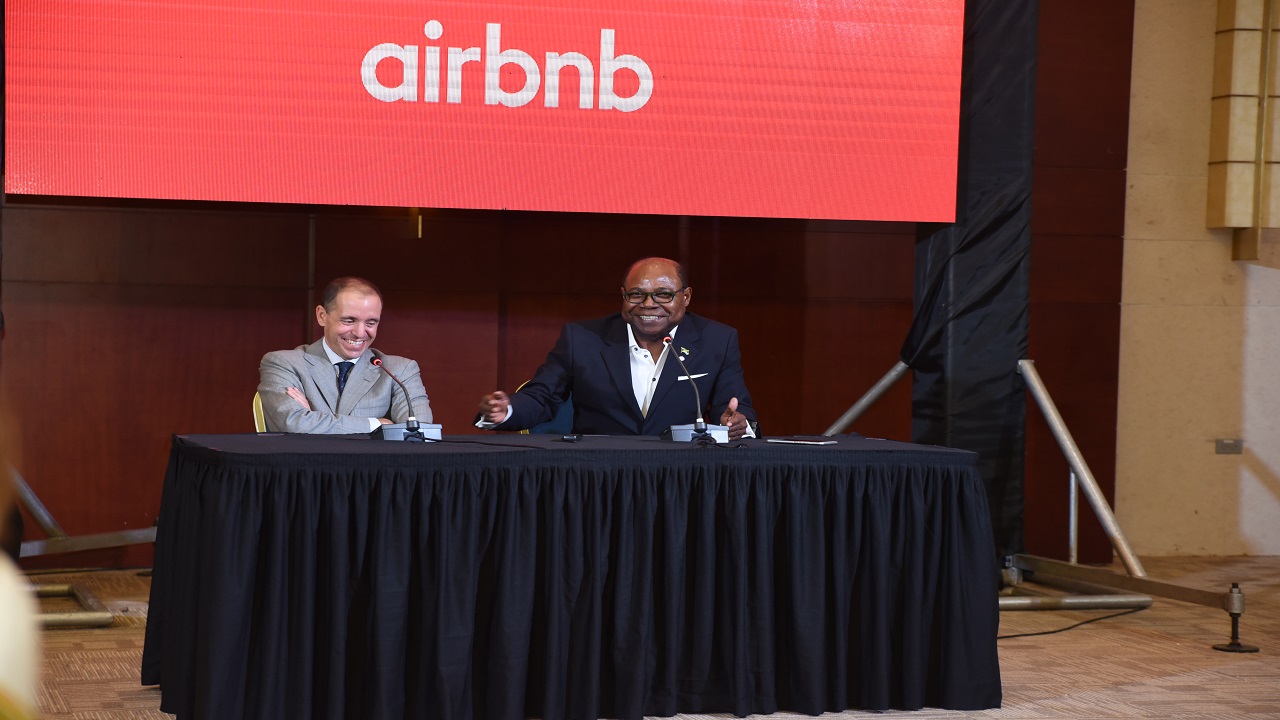 Tourism Minister, Edmund Bartlett (right), alongside Chris Lehane, Head of Global Policy and Public Affairs for Airbnb, during the latter's presentation during a luncheon and press conference at this week's high-level tourism conference in Montego Bay, St James.

Silicon Valley giant, Airbnb, the world’s largest online home lodging portal, which allows everyday people to share their homes with visitors at a cost, on Wednesday detailed at a high-level luncheon and press conference hosted by them at the global tourism conference in Montego Bay, their rapid growth in Jamaica over the last year.

With Jamaica’s hotels experiencing consistently record high occupancy rates, rapidly increasing numbers of tourists are also using the homes of primarily ordinary Jamaicans, via Airbnb, to vacation, with figures showing 54,000 guest arrivals this year, compared to 36,000 for all of last year. This is in addition to 5,600 active listings today, coming from 3,600 last year, and Jamaica’s hosts earning a total of US$8.6 million or J$1.1 billion this year, over US$5.8 million or J$737 million last year, almost all of which is pumped into the local economy.

“Former Special Assistant Counsel to US President Bill Clinton and former Press Secretary to US Vice President Al Gore, Chris Lehane, who is now the Head of Global Policy and Public Affairs for Airbnb, made the disclosures before a packed room of officials including the tourism ministers of Jamaica and the Bahamas and high-level Caribbean and international government, tourism policy and industry officials,” noted Delano Seiveright, Senior Advisor and Strategist in the Tourism Ministry.

“Lehane was accompanied by several other senior executives, and also met with Prime Minister Andrew Holness and Tourism Minister Edmund Bartlett about a raft of unique strategies they are rolling out for Jamaica that will further increase growth numbers and better direct visitors to lesser known attractions and experiences across the island,” Seiveright further stated.

Bartlett, who last December signed a memorandum of understanding (MOU) between the Jamaica Tourist Board (JTB) and Airbnb as part of his aggressive tourism growth strategy, congratulated Airbnb and the many ordinary Jamaicans who have become first-class hosts for thousands of tourists.

Airbnb lodgings are popular around uptown areas in Kingston and several inner-city communities, with the most prominent being Trench Town, former home of reggae king, Bob Marley; Portmore; Treasure Beach; Montego Bay; Ocho Rios; Portland; and other areas along the island’s north coast.

A first for the Western Hemisphere, the United Nations World Tourism Organisation (UNWTO), Government of Jamaica, World Bank Group and Inter-American Development Bank Global Conference on Jobs and Inclusive Growth: Partnerships for Sustainable Tourism was held from November 27 to 29 at the Montego Bay Convention Centre, with over 1,300 delegates in attendance.

“The turnout, according to the UNWTO Secretary General and other officials, was excellent, and ranked as one of the largest ever, with very high-level representation from governments, private sector and International organisations,” Seiveright indicated.

Airbnb was one of the platinum sponsors of the conference, contributing over Ja$8 million to its budget.

Jamaica set to welcome a record 4 million visitors this year