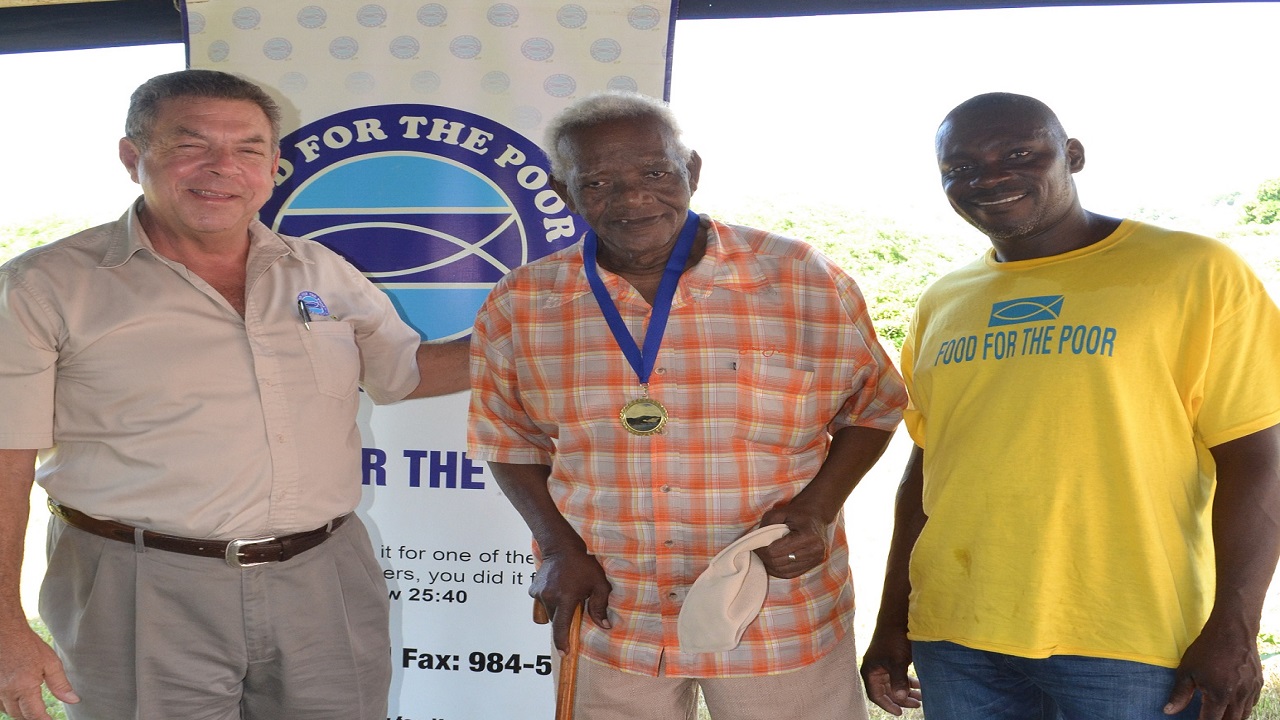 A total of fifteen veteran fishermen were awarded for their years of service to the community.

The purpose of the event was to recognize the older fishermen in the village who have mastered the craft of fishing and who have passed on their expertise to younger fishermen.

A total of fifteen veteran fishermen were awarded for their years of service to the community. The Veteran Fishermen Recognition Ceremony is the brainchild of the boat captions of the Seven Miles Fishing Village.

The Seven Miles Fishing Village was established 11 years ago by Food For The Poor.  The project encompasses the communities of Seven Miles (primary area) and Nine Miles in St. Andrew.

Food For The Poor’s support includes the allocation of six boats, engines, fishing equipment and gear shed, which were handed over in September 2006. Support has continued over the years with additional fishing equipment, training and housing.

Nakhle Hado, Director of Distribution Services & Fishing, FFP Jamaica, attended the Recognition Ceremony, and stated that the Veteran Fishermen were the “mentors that have crafted the way forward for the new generation.”

“Food For The Poor is really happy to offer the support needed, especially on this special occasion.  Fishing is not just a job, it’s not a hobby, it is more than that.  The country depends on the fishing industry, the food security depends on it and fish, especially local fish, is the best source of protein that we have in Jamaica.  As fishermen, you support the country and support us to get food on our tables for our families,” Hado said.

Benjamin paid his own tribute to the veteran fishermen in his village, adding, “What you have done for us has not gone unnoticed, even giving us as children, portions of your catch.  You have laid the foundation for us, you never held back the knowledge from us and we, in turn, will pass it on to the next generation.”

Veteran Fisherman & Honouree Cecil Lawla of the Bull Bay Fishing Village showed his gratitude as he was recognized in the ceremony:

“I am very grateful, I lift my hat to Food For The Poor and the fishermen from Seven Miles who organized this event.  Good to be here and be part of this with all the other veterans – it’s a good feeling.”

Executive Director, FFP Jamaica David Mair said the donors of FFP and his organization recognize the importance of the fishing villages to the development of the surrounding communities, and will continue to support the fishermen and the villages through donations of equipment, training programmes, housing and any additional support as needed.

“The quality and quantity of a fisherman’s catch after returning to sea not only impacts the fisherman, but also impacts the surrounding village and community. That is why it is important for us to continue assisting fishermen to create better livelihoods for communities as a whole,” he added.

Holness reaffirms gov’t support to Food for the Poor

Yohan Blake, Food for the Poor partner to help the indigent