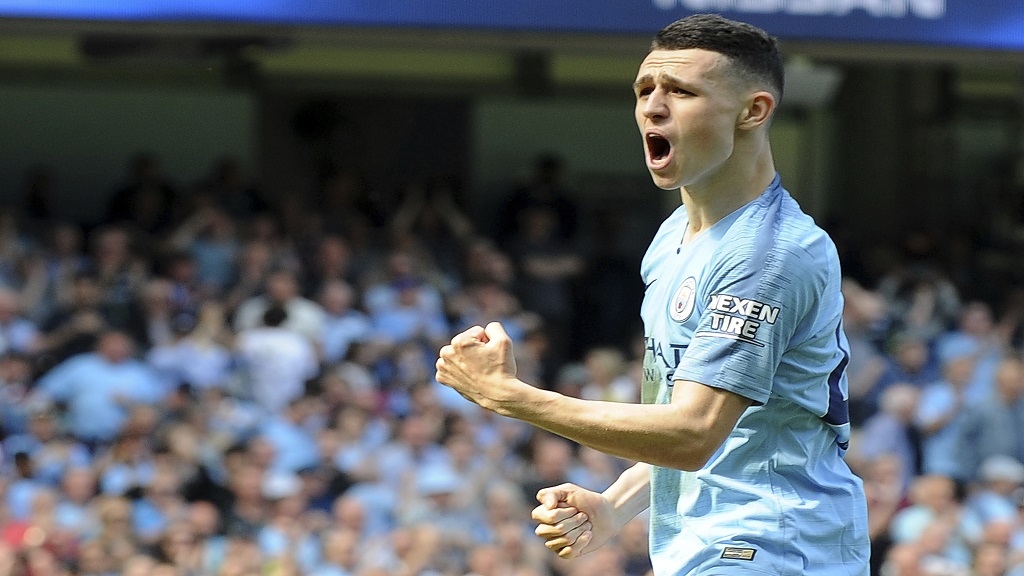 Phil Foden scored his first English Premier League (EPL) goal as Manchester City beat Tottenham 1-0 at the Etihad Stadium to bounce back from Champions League heartbreak and move a step closer to retaining their domestic crown.

Spurs ended City's European adventure on Wednesday despite losing 4-3 in a controversial and thrilling encounter at the Etihad, but they were unable to dent the champions' title defence as Pep Guardiola's men clinched a measure of revenge.

An entertaining first period saw just the one goal despite several opportunities at both ends, with Foden – making only his second top-flight start – opening his Premier League account in the fifth minute, though City did lose Kevin De Bruyne to injury.

Spurs were aggrieved to not be awarded a second-half penalty and that ultimately proved crucial as City held on to the slender victory, taking them back above Liverpool to the Premier League's summit ahead of Wednesday's trip to Manchester United.

Although Spurs started by going close through Son Heung-min, City took an early lead as they did in midweek, Foden nodding in after Sergio Aguero headed a Bernardo Silva delivery back across goal.

Spurs responded well as Christian Eriksen tested Ederson and Aymeric Laporte had to make a last-ditch tackle to deny Son, but City looked purposeful in attack and should have won a penalty when Jan Vertonghen sent Silva tumbling in the 20th minute.

City continued to grow as the first half progressed, though they lost De Bruyne to what appeared to be a knee injury just before the break, handing Spurs a boost.

Proceedings were tighter after the interval, though City could count themselves lucky to not concede a spot-kick – Kyle Walker seemingly handling the ball in the box after a Dele Alli flick.

Raheem Sterling should have wrapped things up with 19 minutes to go when directing Leroy Sane's cross goalwards, but Paulo Gazzaniga somehow kept it out with his right foot.

That ushered in an anxious end for City, with Ederson forced to thwart Lucas Moura, but the hosts dug deep to secure a crucial victory.

What does it mean? One final major obstacle remains

Most people identified two matches in City's run-in that could see them slip-up; Tottenham at home and away to United. They are now past the first hurdle relatively unscathed. It is seemingly only bitter rivals United that stand between City and a second successive Premier League triumph.

The best player on the pitch, by some distance. Silva constantly caused Ben Davies problems on the right flank, while his darting runs inside helped open up gaps in the Spurs defence, as was the case for Foden's goal. A fine display.

While there was not much he could have done about the goal, Gazzaniga's general involvements were otherwise unimpressive, as he tried to over-complicate play and never looked in command in the penalty area.

- Manchester City have won 25 home games in all competitions this season, the most they've ever won in a single campaign and the most by an English top-flight club since Man Utd in 2010-11 (26).
- Tottenham have lost five successive Premier League away games for the first time since May 2004, a run of six under manager David Pleat.
- City have won their last 10 Premier League games – their longest streak since a run of 18 between August and December 2017, which remains the all-time top-flight record.
- Tottenham have lost 11 Premier League games this season, as many as they had in their previous two campaigns combined (four in 2016-17, seven in 2017-18).

Things do not get much easier for City as they face the short trip to Old Trafford on Wednesday. Spurs host Brighton and Hove Albion the day before.