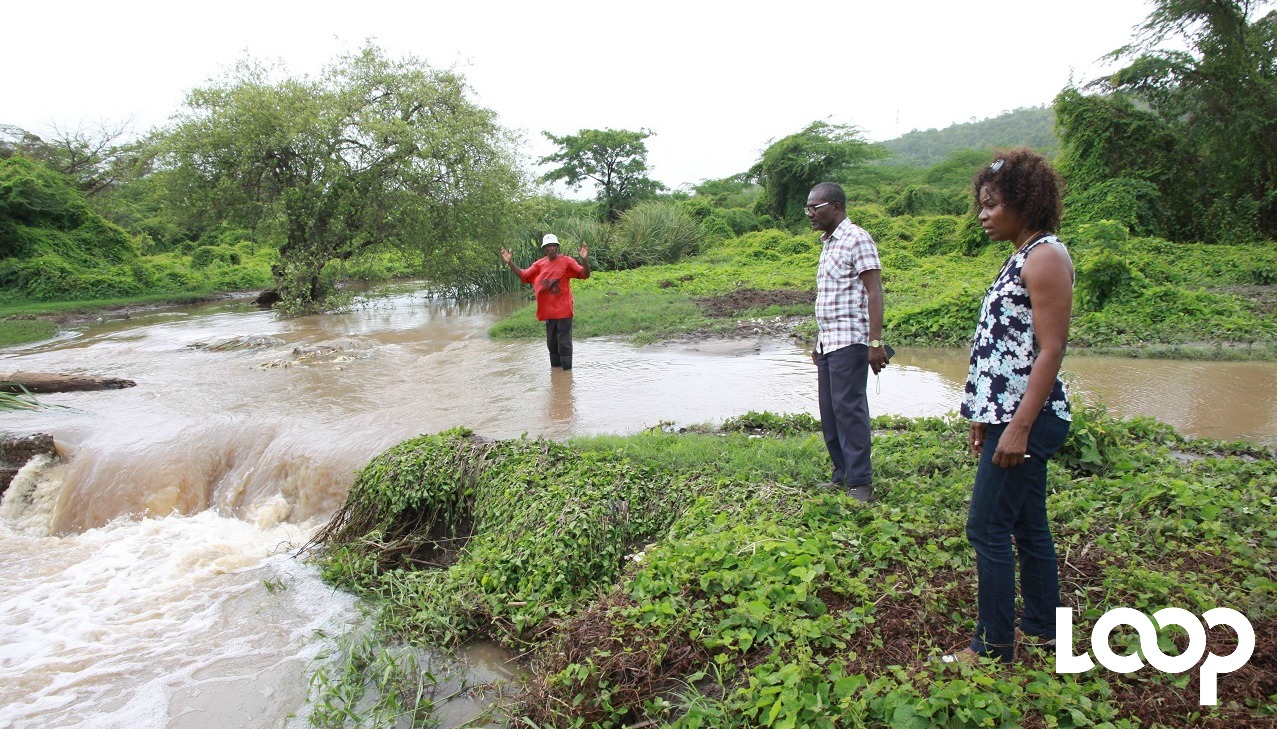 A resident shows JLP Councillor of the Race Course division Pauline Reynolds, and Lloyd Samuels (centre) of the Clarendon parish council, the water at the Fisher Road fording.

Residents of sections of Clarendon affected by flood waters caused by the persistent rain that has been showering the island for the past few days are blaming poor drainage in the parish for their dilemma.

Among the areas that were flooded when Loop News reporter Job Nelson visited Clarendon on Monday, were Water Lane, Kemps Hill, Banks, Four Paths and sections of Toll Gate.

According to residents, they had to battle water from the early hours of Sunday morning which left various homes flooded. For some of them, it was the second time they were hit by flood water in less than a month.

Doreen Barrett of Water Lane, whose house was inundated with water, said the residents of the area are among those who are to be blamed for the flooding.

“Di drain round deh suh,” Barrett said, pointing to the back of her house, “di people dem throw debris inna it and block it up.”

Barrett said her family had to previously fork out $20,000 to clear a drain but it wasn’t long before it became blocked again.

For Denton Williams of Kemps Hill, if the residents had not bonded together during the downpour and cleared the drains, the area would have been a total disaster.

He said, “yesterday (Sunday) morning at approximately 5:30, the citizens in this area had to come out in the rain and take matters into our own hands by clearing the drains, to ensure that the water drained off.

“Water was extremely high as it was about knee high. A lot of water was running but it didn’t affect the houses or other buildings, although the gullies overflowed their banks.”

A section of the Kemps Hill main road still had knee-high water when the Loop News team visited. The situation caused Kemps Hill High School to close its doors to a large section of its student population, as only those who were sitting external examinations were allowed at school.

Just a few metres away from the Kemps Hill main road, the fording at Fisher Road was almost impassable, as the water pressure was too much for the passage underneath, that was created for it to pass through and overflowed on the road.

According to councillor for the Race Course Division, Pauline Reynolds, the communities that Fisher Road served, were blocked in during the downpour on Sunday.

Reynolds, a Jamaica Labour Party councillor in People’s National Party MP Noel Arscott’s constituency, agrees with the residents that the drains caused the problems in the division.

“It is really bad. I have never seen it like this before. I think it is poor drainage. This water is coming from way up in Kemps Hill,” Reynolds said, referring to the situation at the fording.

“The member of parliament, rightly, is the person who is responsible,” she said.