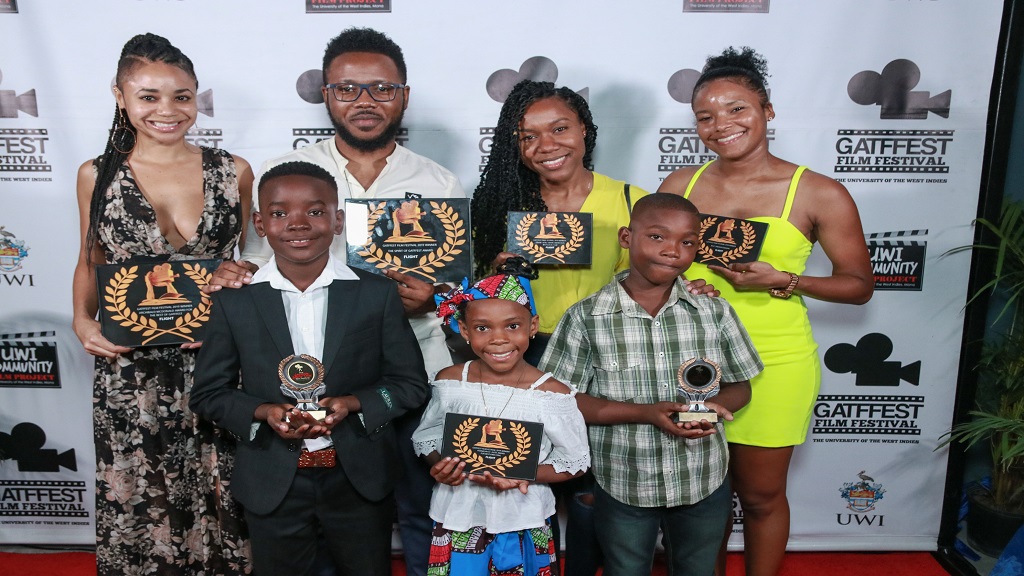 The cast and crew of 'Flight' including co-directors Kia Moses (back row, left) and Ian McDonald (back row, second left)

Jamaica-produced and directed film, Flight, copped the top awards at the Gatffest Film Festival awards on Sunday evening at the University of the West Indies, Mona campus.

The film took home awards in seven categories including the Archibald McDonald Award for Best Film; Lennie Little-White Award for Best Local Film, the Franklyn St Juste Award for Best Directing, the Viewers Choice Awards and the Best of the Spirit of Gatffest Award.

The film was directed by Kia Moses and Ian McDonald.

Other winners included 'Mango Wars' by Kyle Chin which took home two awards; 'Too Late' by Dario Shields; the Mexican-produced film, 'Sweet Vengeance' by Francisco Atristrain; and the Colombian-produced 'The Old Japosal Inheritance' by Jhon Robert Guerrero and Sahuly Cortes.

The film festival ran for nine days and featured films from across the Caribbean region, Mexico, South Africa, Japan and Colombia.

This year’s seventh staging saw the launch of the first Gatffest Short Film Pitch Competition and the winners were Kaleb D’Aguilar ‘Sonshine,” Vennessa Hanshaw ‘A Touch of Sugar’, and Hanif James ‘Shade of Indigo’. The winners will be assisted to produce their films for Gatffest 2020 with support from the Bob Marley Foundation and Reelvibez Studios.

The films were selected from 52 entries and were screened by a panel of six judges.