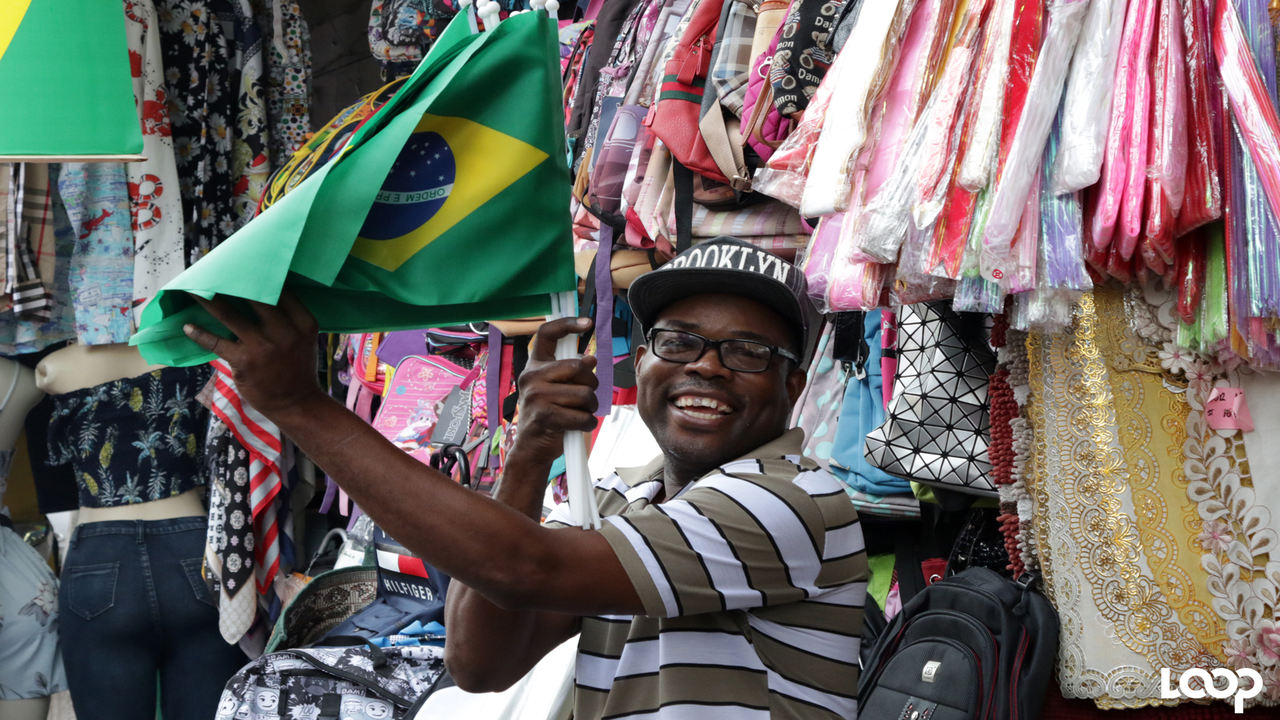 This vendor is all smiles as he displays Brazilian flags, which are among the hottest items as World Cup fever hits Jamaicans. (PHOTOS: Ramon Lindsay)

With the start of the World Cup inching closer, flag vendors across downtown Kingston are reporting booming sales.

The miniature flags of usual favourites Brazil, Germany and Spain in particular are selling like hot bread, according to the vendors, many of whom are preparing to increase their stock in anticipation of sales increasing further as the tournament kicks off.

“Right now, me don’t have hand to sell the flags them; as me get them gone,” Oswald Green told Loop News while conducting business along Queens Street in downtown Kingston.

Flags are being sold for $200 in the commercial district.

Ricardo Mundle, another vendor who was seen in the downtown area, shared similar sentiments.

“Yeah man for real, sales for flag gone through the roof; we really feel good for how business going,” he said.

“Right now me a sell up to 20 flags a day,” said Mundle, who expects that number to increase significantly as the tournament gets underway.

It was a similar experience for vendor Howard Grant, who plies his trade along Orange Street.

“Yes things really good this year,” said Grant, who noted that most of his flag sales are being made to teens and young adults.

Indeed, the Corporate Area has been transformed into a sea of colours as Jamaicans show support for their ‘adopted countries’ ahead of the football tournament - widely regarded as the greatest international sporting event – which begins on Thursday.

The streets and corners of the downtown and Half Way Tree commercial districts are a buzz with football fever.

In some areas, the regular chatter about goods and services have been replaced by heated discussions between members of the public, vendors and formal business operators about which team will take home the trophy that is made of 18 karat gold.

World Cup euphoria kicks in as Jamaicans rep their teams