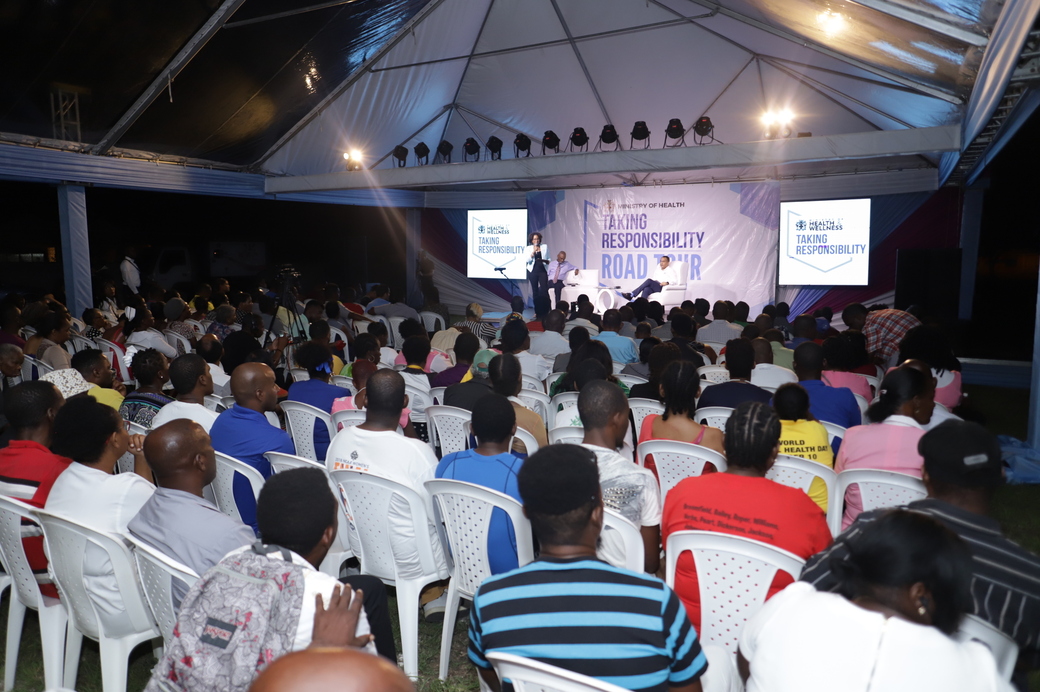 Several guests showed up in support of the Mental Health Matters forum.

On World Mental Health Day, October 10, the Ministry of Health & Wellness actioned social responsibility with the public forum Mental Health Matters. Earlier in the day, the agency launched its Speak Up, Speak Now campaign and donated 14 buses to the Bellevue Hospital then hosted a two-hour mental health awareness session on the grounds of the mental institution.

There's already a great deal of stigma associated with the institution. So, in efforts to break the stigma, Minister of Health & Wellness Christopher Tufton and organisers were motivated by the “negative impressions” of what is considered the leading mental health facility in the Caribbean. 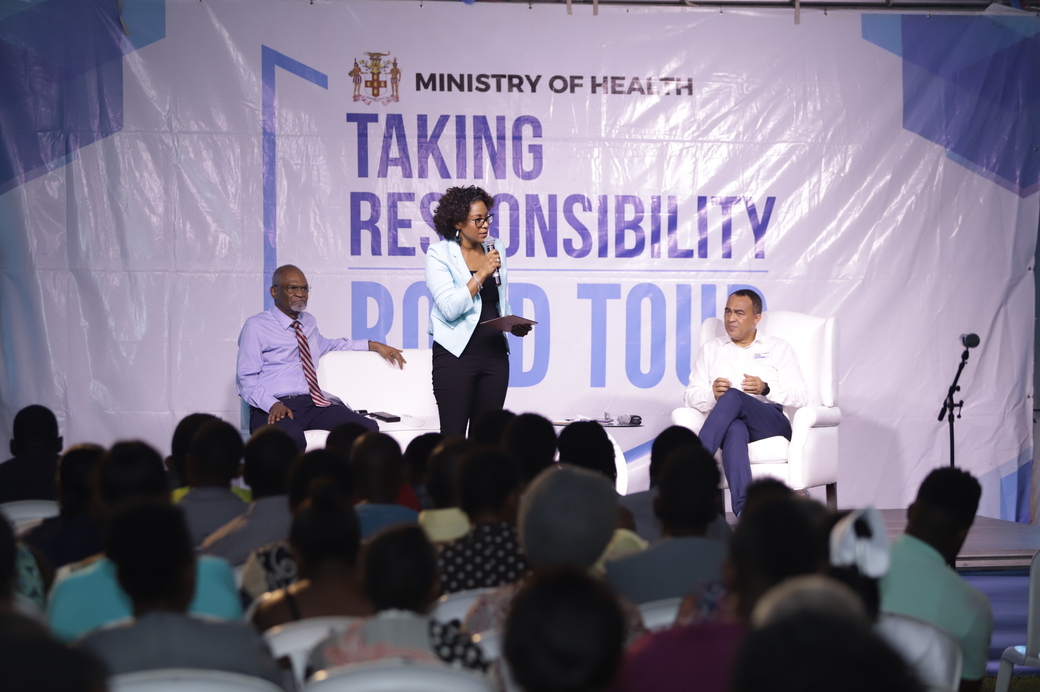 Longmore broke down the levels of discrimination spanning the media, the workplace, the home, and in society. She then tapped on the Jamaican belief that obeah is responsible for several of our organic mental health challenges. Longmore reminded guests that mental health is organic and mostly hereditary, or caused by chemical imbalances within the body. 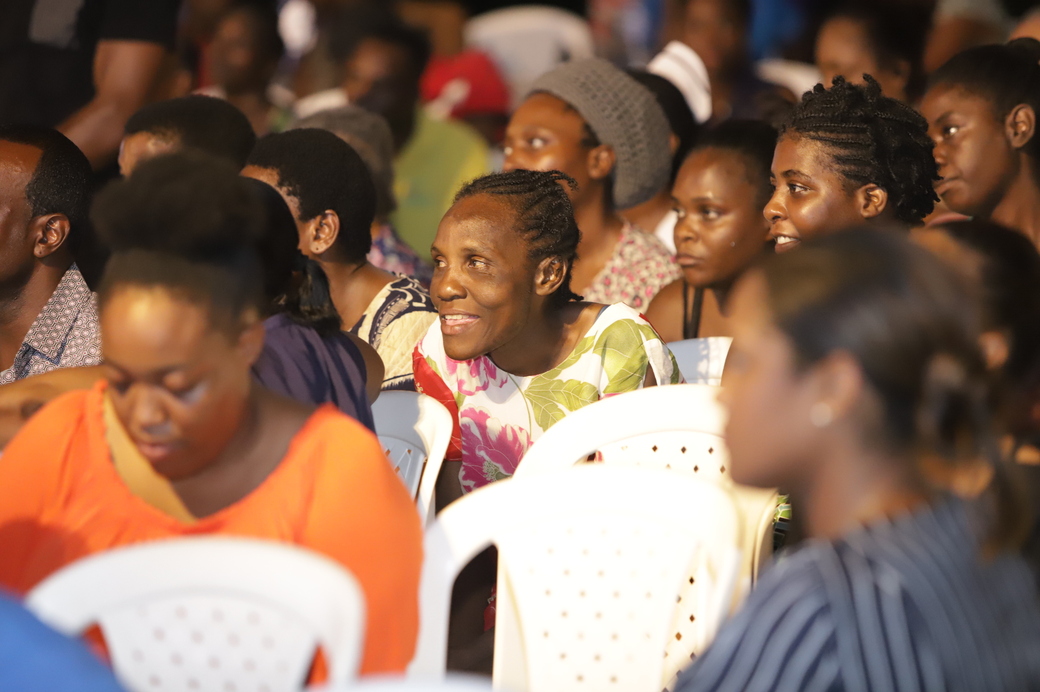 “The belief of spiritual possession and other non-medically addressed issues actually take away from the care of the individual.” Longmore brought the point home with varying visual references of instances of mental abuse. One situation where a man was tied to a fence along Norbrook Road and another with a nude adult male walking aimlessly in the Hope Pastures area.

Persons need to understand what is happening [with the mentally ill patient], and with understanding comes much better behaviour. The problem of attitudes leads to prejudice. The problem of the behaviour with that attitude of the lack of understanding is usually what causes some forms of discrimination. - Dr Sapphire Longmore, clinical psychiatrist

Dr Earl Wright provided a detailed listing of developments over the years and mentioned his recommendations to the Mental Illness and Homelessness Task Force to transition the wards at Bellevue Hospital housing the discharged long-stay patients into an adult care facility. Currently, over 486 of the 680 patients at the Bellevue Hospital have been discharged but remain on the compound due to challenges of reintegrating into society.

Wright also discussed recommendations from the Pan-American Health Organisation and World Health Organisations. One such being re-establishing and revitalising the Mental Health Review board. Another was the importance of early brain development of vulnerable children and teaching parents/guardians how to interact with their children. And lastly, decreasing stress in society with green areas.

Spirits were enlightened with messages from several patients, but, even those came on a sombre tone. Among the highlights, however, was Minister Christopher Tufton's vow to establish safe, green areas (like the Emancipation Park) for socialisation and recreation, specifically for mental health patients.

Here are some of the inspiring stories from patients past and present...

Mental health patient Courtney Jackson is a dancer with the Quilt Performing Arts Company and a music performance student at the Edna Manley College of the Visual and Performing Arts. Jackson faces her challenges with mental health every day. She was a patient of the Bellevue Hospital who, in 2014, was diagnosed with depression, anxiety in 2017, and thereafter diagnosed with Type 2 Bipolar disorder. "It's hard to live with sometimes, but the most important thing you can do living with depression is to keep calm and be patient with yourself."

We met Nadine Davis-Barnes, a divorcée and diagnosed psychosis patient who obtained a distinction in Mathematics has made it her duty to become a part of everything, and has been awarded a certificate of excellence in art. “The patients here get three meals a day; no bills to pay.” 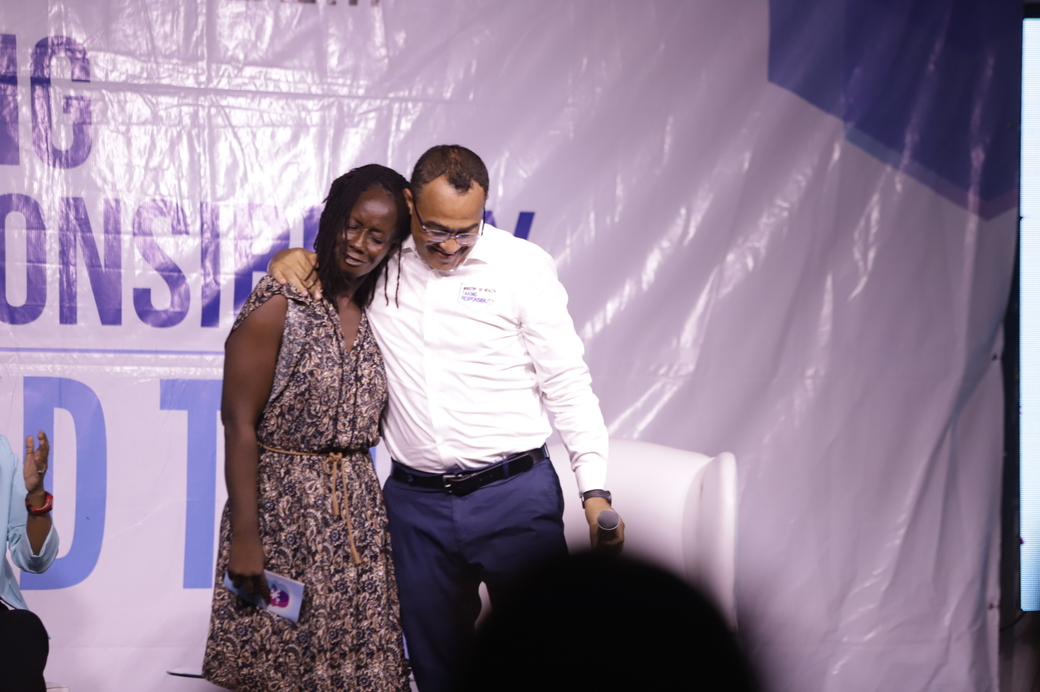 She shared her five tips for surviving mental illness...

3 Stick to the only one who can truly help us, which is God

4 Get lots of exercises

After years of displacement between the Bellevue Hospital and the Bellevue Hospital – Kenneth Royes Rehabilitation Centre in Spanish Town and the Marvin believes he is equipped to reintegrate and very much capable of working in a warehouse and farming. After he was discharged, his father has promised to receive him and though he's not seen him since Marvin is hopeful that the new facility for the discharged and homeless members will be “where I call home”. 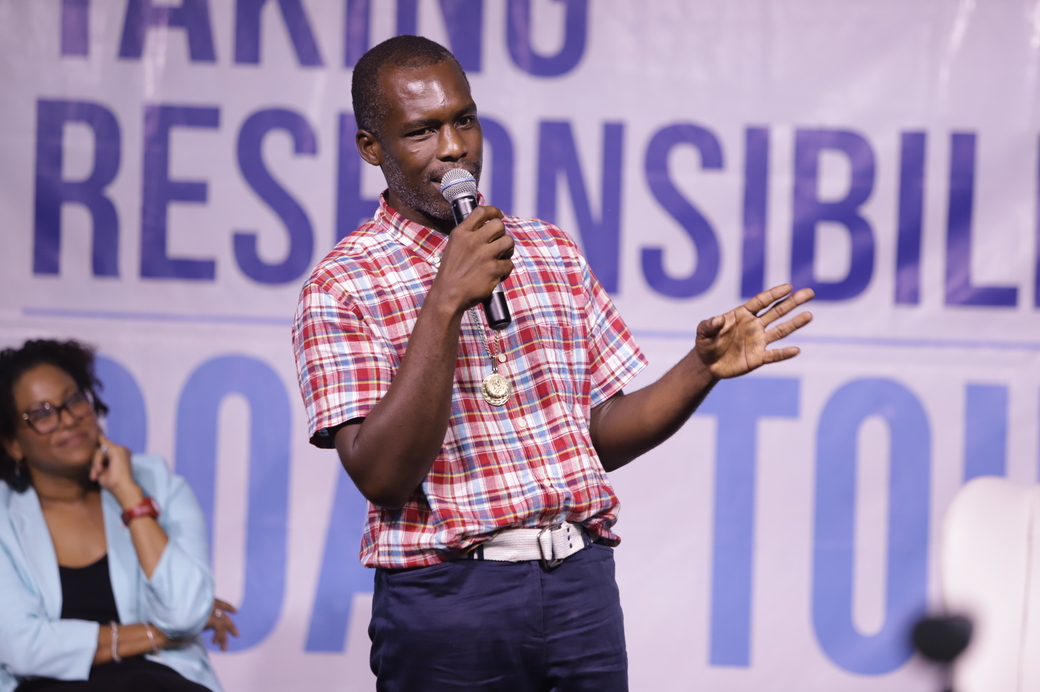 People at Bellevue want to live a better life; they want an opportunity. — Dr Christopher Tufton, Minister of Health & Wellness

In 2017, there was a Mr and Mrs Bellevue Competition. 68-year-old Earl Cargill was crowned Mr Bellevue and have since adopted the moniker. He is a member of the OT Choir and has been a resident for over 45 years. The entertainer he is, Cargill sang his version of Ken Boothe's Everything I Own before joining the OT Choir for a rendition of Give Love on Christmas Day by The Jackson 5.

Cargill and the gang

Other highlights include a spot prize for the best-dressed patient. At the end of it, Minister Tufton couldn't select one winner and chose them all before closing out the event. Though Mental Illness Awareness Week is behind us, for some mental health can be a life-long battle. Help yourself to the national mental health helplines below... 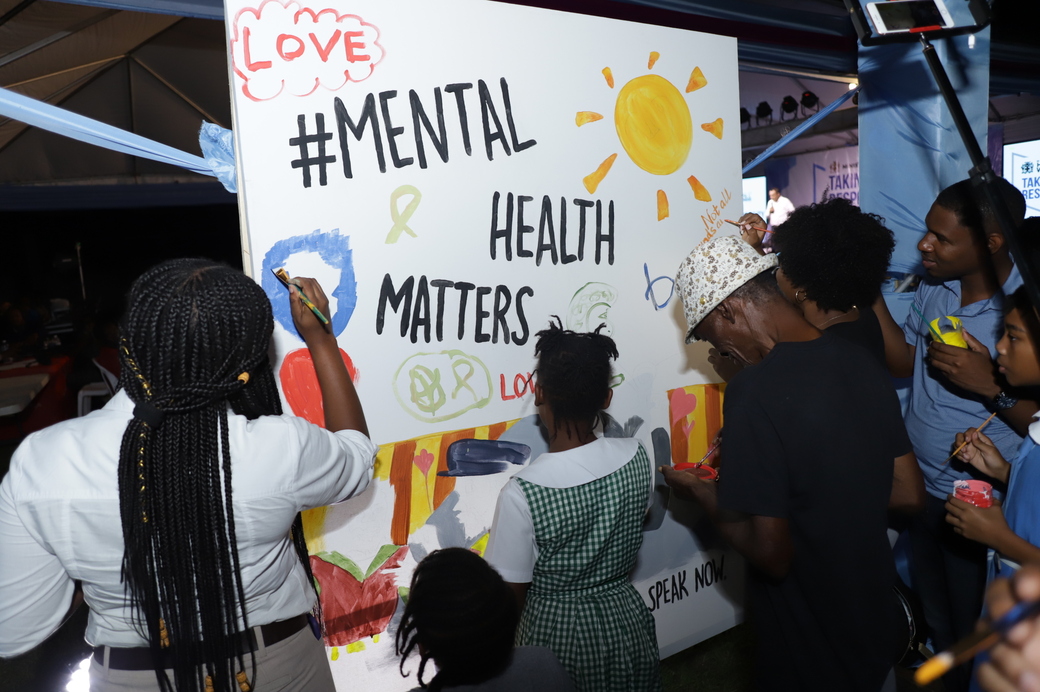 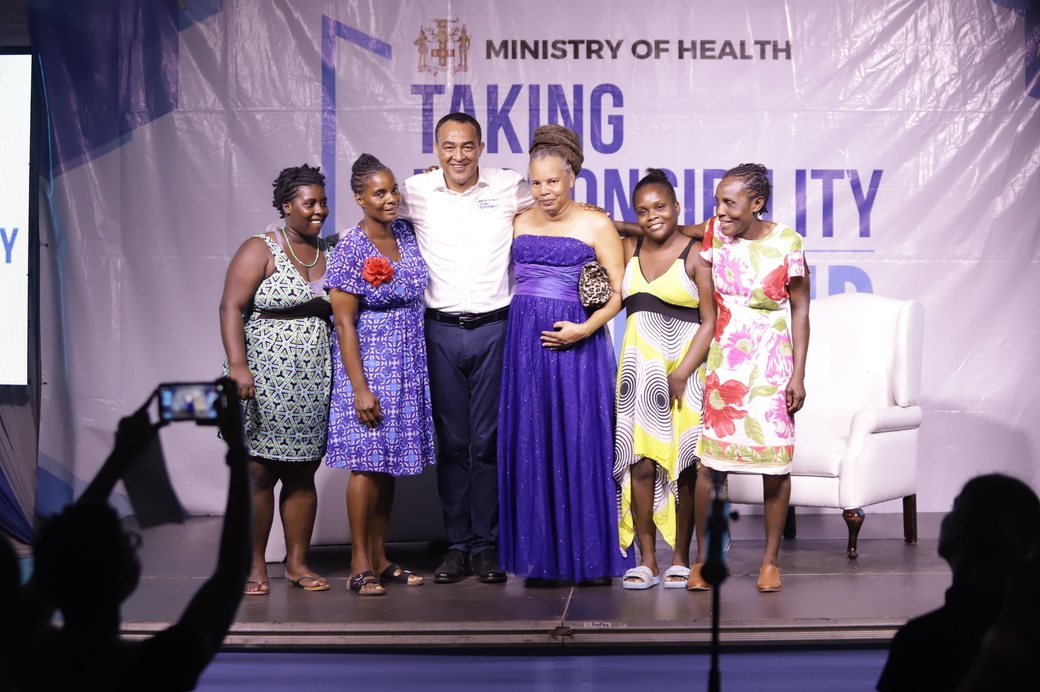 Removing the stigma of mental health