The Jamaica Coffee Exporters Association (JCEA) last Saturday recognised five Jamaicans for their contribution to the development of the coffee industry at its annual banquet held at the Jamaica Pegasus in Kingston.

This award recognises current members who have given extraordinary service to the association and the coffee industry over the past 25 years.

St Clair Shirley is associated with Hylton Shirley Estates Limited, which was formed on May 18, 1987. The company is chiefly involved in the production and marketing of the Jamaican Blue Mountain Coffee on the local and international markets. David Shirley accepted the award on behalf of his father, St Clair. 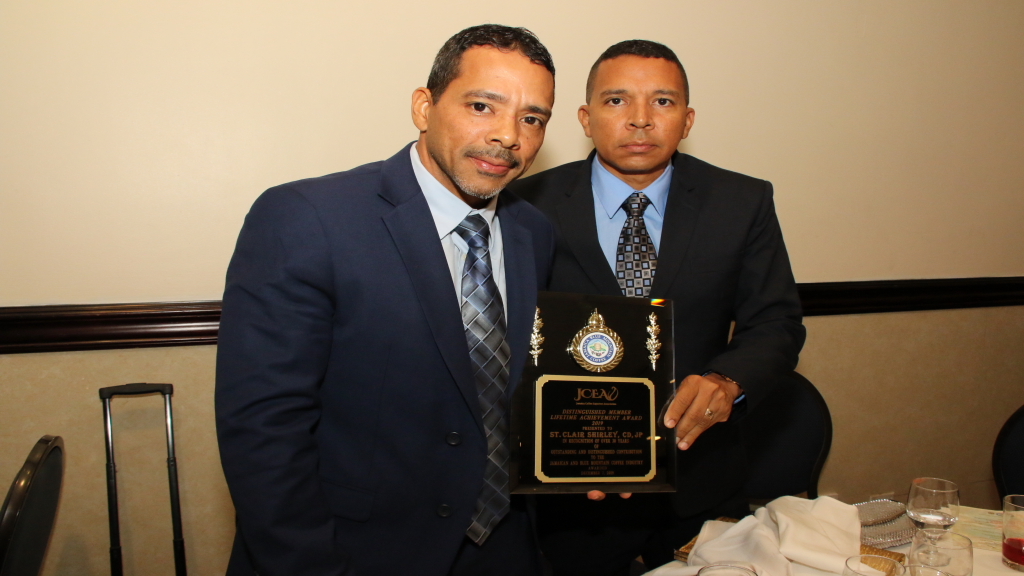 The Shirley brothers showcase the award of their father, St Clair.

John O Minott also collected the award for father John Oliver (Jackie) Minott. The Minott's own and operate the Jamaica Standard Products. The company is headed by Jackie and John O. Minott (father and son). The seven decades-old company employs more than 150 Jamaicans at its offices, farms and factory.

The company started with the cultivation and production of world-renowned coffee. Today it also produces a coffee liqueur from its Baronhall Estate; a line of Jamaican sauces and spices from Baronhall Farms. Jamaica Standard Products also owns five retail stores between Montego Bay and Ocho Rios, according to its website.

An entrepreneur and noted ENT consultant surgeon, Dr Lyn started the company in 1994.

The company website outlines that the company's Coffee Traders brand is among the most respected of all Jamaica Blue Mountain Coffee estates, and its Café Blue coffee shops are among the island's most popular pit stops. The estate is located in the northwestern peaks of the Blue Mountains.

The company produces its very own roasted coffee under the JABLUM brand. Its website claims that this 100 per cent Jamaica Blue Mountain Coffee product is the most sough

In his address at the awards as president, Grant indicated that two other awards - the Distinguished Lifetime Achievement Award and the Jamaica Blue Mountain Hall of Fame will be presented to other outstanding players in the coffee industry next year.