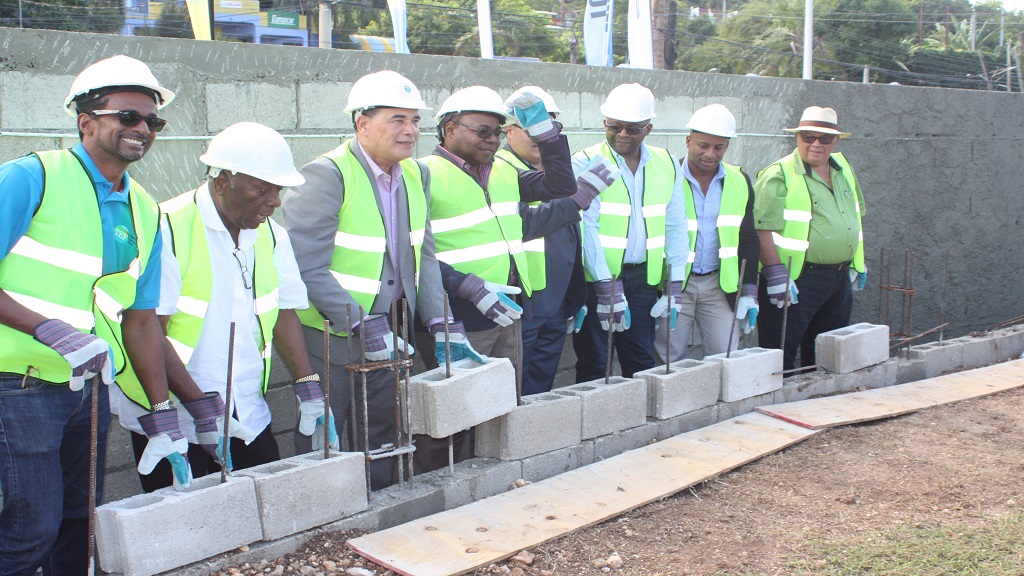 Tourism Minister Edmund Bartlett and Montego Bay Mayor, Homer Davis (centre), along with other tourism interests, participate in block laying on Saturday as part of the restoration of the 'Welcome to Montego Bay' sign that was destroyed in a motor vehicle crash outside the Sangster International Airport earlier this year.

The Tourism Product Development Company (TPDCo) has sought to clarify the expenses behind the project to restore the 'Welcome to Montego Bay' sign in the resort city, amid questions over what some deem to be a seemingly 'exorbitant' $17 million estimated cost for the exercise.

According to the TPDCo, the new 'Welcome to Montego Bay' marker, to be situated outside the Sangster International Airport roundabout, will be "an attraction of first world proportion", and not merely a sign.

"The sign is a tropical contemporary interpretation of a traditional resort along a bay. It is the embodiment of the history of Montego Bay and will provide a total experience for locals as well as the millions of tourists who traverse the area," said the TPDCo in a news release on Tuesday.

"It must be noted that this is not just a sign but an attraction of first world proportion which will have a dual façade that faces the east as well as the west. There is a digital component where letters will be illuminated and are changeable to match the seasons," said the company which is responsible for the implementation of the project.

It also noted that the area around the sign will be landscaped and an irrigation component included to "ensure the long term stability of the aesthetic maintenance."

In a breakdown of the cost, the TPDCo explained that $8 million is projected to be spent on the dual base facing the east and west; $3 million for lettering; $2 million for electrical work and $1 million for irrigation. The tourism development organisation said a further $3 million has been allocated for contingencies.

The St James Municipal Corporation has been contracted to ensure that the project is completed by year end and within budget.

The announcement of the $17 million project had raised questions over what some people deemed to be an exorbitantly high cost for a sign.

Opposition Spokesman on Tourism, Dr Wykeham McNeill described the development as “questionable expenditure” at a time when, he said, tough wage negotiations with the public sector workers are still in progress and there are urgent needs in education, health and national security.

In the meantime, TPDCo noted that it took into account recommendations made by the National Works Agency, which it said it consulted both in the design phase and on site, to ensure the safety of road users.

"To that end visible yield signs are being replaced as well as other safety features including the installation of speed strips and the refreshing of road markings," said the TPDCo.

The initial 'Welcome to Montego Bay' sign at the same location was mowed down in a fatal motor vehicle crash earlier this year.