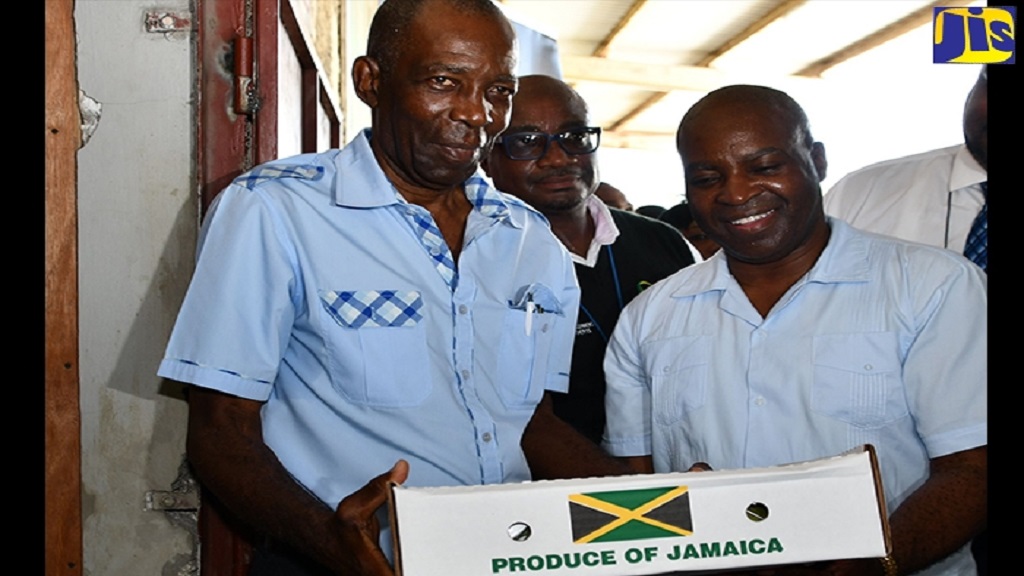 Minister without Portfolio in the Ministry of Agriculture, JC Hutchinson (left), and Acting Permanent Secretary in the ministry, Dermon Spence (right), hold a box of Jamaican mangoes that was among the first batch to be exported to the United States in 20 years, at the Sangster International Airport Export Complex in Montego Bay, St James on Thursday. At centre is Manager of the complex, Dalton Hastings.

A shipment of 12,000 pounds of mangoes was exported to the United States (US) on Thursday.

The mangoes – ‘Julie’ and ‘East Indian’ – were the first to be exported to the US in 20 years.

Export of the mangoes, which is being facilitated through the Mango Irradiation Programme, is expected to continue once or twice per week until the close of mango season in late July 2019.

Minister without Portfolio in the Minister of Industry, Commerce, Agriculture and Fisheries, JC Hutchinson, said the demand for Jamaican mangoes is high in the Diaspora.

He was addressing the official ceremony for the exportation of the mangoes, which was held at the Sangster International Airport Export Complex in Montego Bay, St James.

“This... shipment of mangoes to the US tells us that the markets are there and we must grasp every opportunity to meet the demands of those markets,” the minister said.

“I cannot emphasise how critical marketing is to the growth of the sector. It is estimated that some 1.6 million Jamaicans reside in the United States, mainly in the areas of New York, New Jersey and Miami. In addition to that, there are another 1.2 million Jamaicans from the Caribbean Diaspora…, so there is no shortage of consumers who are hungry for Jamaican mangoes,” he added.

Hutchinson noted that Jamaica has, for some time, been exporting mangoes to Diaspora markets in the United Kingdom (UK) and Canada, and that in 2013, the country exported 654,954 kilograms of mangoes to Canada, and 691,206 kilograms in 2014.

In 2014, the United States Department of Agriculture (USDA) gave clearance for Jamaica to export mangoes to that country. This, however, was subject to compliance with standards required by the USDA’s Animal and Plant Health Inspection Service. As a result, the Jamaican Government has had to work with the nation’s farmers to meet the necessary requirements.

Hutchinson said one of the requirements was that mangoes to be exported should meet US standards by ensuring that the produce underwent the process of irradiation. The process, which involves the treating of fruits with ionising radiation, sterilises fruit flies so that they are unable to reproduce.

In an interview with JIS News, Export Complex Manager in the Plant Quarantine Department of the ministry, Dalton Hastings, said the process does not affect the taste of the mangoes, and increases the shelf life of the produce.

“It (irradiation process) will kill pathogens, which are actually the reasons why the shelf life of most produce decreases, because the pathogens actually cause the produce to rot. So the taste of the mangoes will remain the same,” he assured.

For his part, farmer and exporter of mangoes to the US, Jordan Dawson of Dawson’s Trading Company, told JIS News that exportation of the produce is quite beneficial to the island’s agricultural landscape.

“This is a very beneficial step that has been taken for the farmers in Jamaica. I encourage the farmers to get up to the standard, contact the ministry and get registered so you can sell to importers in the US market in times of glut or oversupply,” Dawson said.

Chief Executive Officer of Xander Distributors in Florida, Leighton Hylton, will be among the first to receive the mangoes in the US to supply the Miami, Fort Lauderdale and West Palm Beach areas in the state.

Hylton told JIS News that Jamaicans in the Diaspora are excited for the mangoes to arrive in the US.

“It is indeed a glorious day. We are very excited in the US about the importation of (Jamaican) mangoes to the US. The Jamaican Diaspora is abuzz with excitement awaiting the produce,” he indicated.

Botanical Roots: Why you should eat mangoes