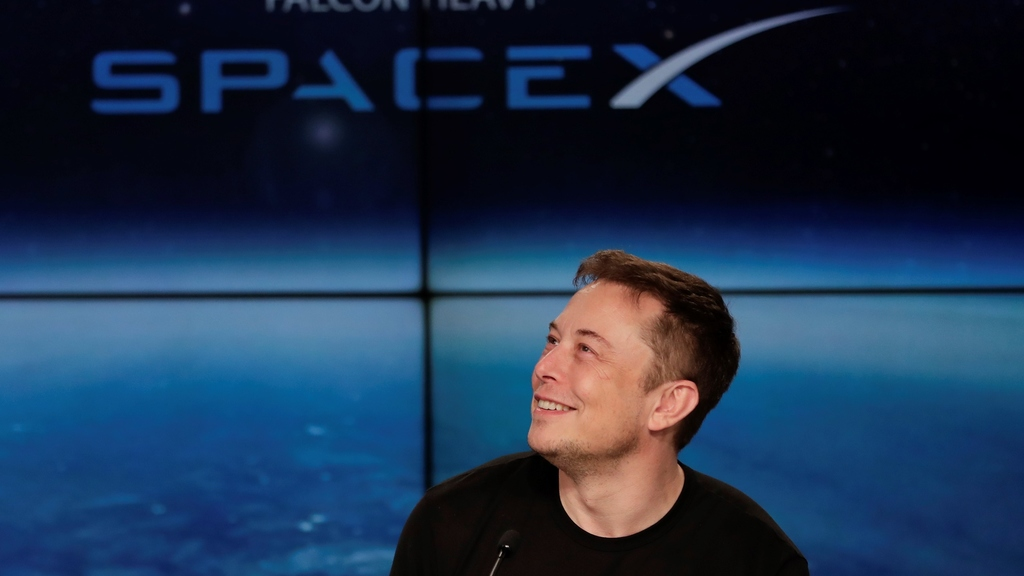 In this Feb. 6, 2018 file photo, Elon Musk, founder, CEO, and lead designer of SpaceX, speaks at a news conference after the Falcon 9 SpaceX heavy rocket launched successfully from the Kennedy Space Center in Cape Canaveral, Fla. SpaceX says it’s signed the first private moon traveler. The big reveal on who it is _ and when the flight to the moon will be _ is scheduled for Monday, Sept. 17, 2018. (AP Photo/John Raoux)

SpaceX said it has signed the first private moon traveller, with some changes to its original game plan.

The big reveal on who it is — and when the flight to the moon will be — will be announced Monday at the company's headquarters in Hawthorne, California.

It's not the same mission SpaceX founder Elon Musk outlined last year. The original plan called for two paying passengers to fly around the moon this year, using a Falcon Heavy rocket and a Dragon crew capsule.

At the time, Musk said the pair approached SpaceX about sending them on a weeklong flight and paid a "significant" deposit for the trip.

The new strategy is to still fly around the moon but using an even bigger SpaceX rocket still in development that has its own dedicated passenger ship. And now, it appears there will be only one person aboard.

Given that this new BFR rocket, as it's dubbed, has yet to be built, the flight presumably is at least a few years off.

Musk's ultimate goal is to colonize Mars. This lunar mission — a flyby, not a landing — represents "an important step toward enabling access for everyday people who dream of travelling to space," SpaceX said in a tweet.

On its website, SpaceX is touting the "first passenger on lunar BFR mission," implying there will be more.

This could be humanity's first lunar visit since 1972, depending on how NASA's latest moon plans shape up. Twenty-four NASA astronauts flew to the moon from 1968 through 1972, and only 12 of them strolled its dusty surface. Next July will mark the 50th anniversary of the first manned moon landing by Apollo 11's Neil Armstrong and Buzz Aldrin.

NASA is shooting for its own flyby of the moon, with a crew, around 2023. The space agency aims to build a gateway in the vicinity of the moon, complete with staff, during the 2020s. It's envisioned as a base for exploration of the moon, Mars and beyond.

SpaceX to launch most powerful rocket – with car on board

SpaceX capsule back at space station with pre-Christmas haul