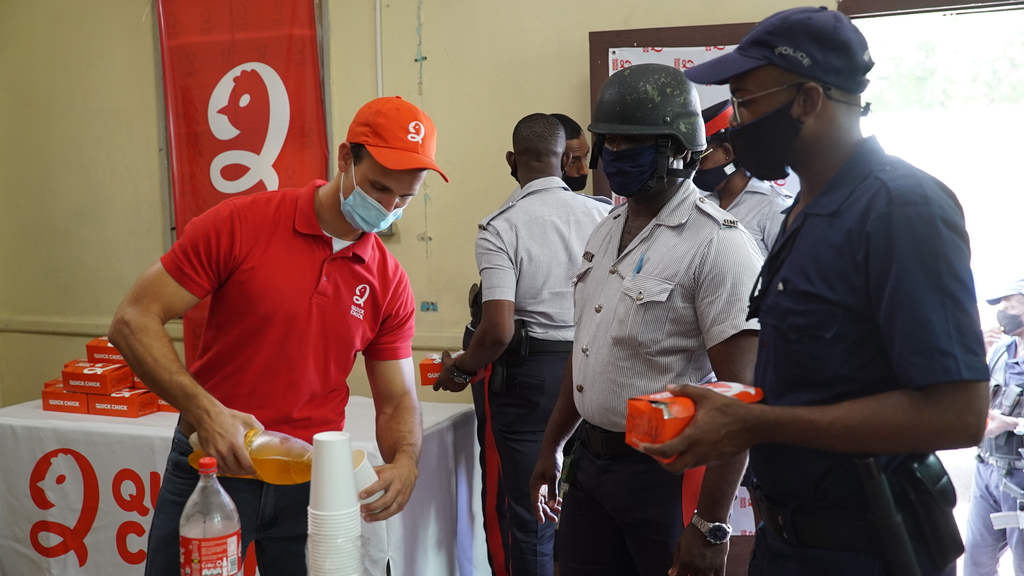 A total of 40 members of the Jamaica Constabulary Force and the Jamaica Fire Brigade, both located at the Half-Way-Tree branches, received a special National Heroes weekend gift of appreciation from Kingston’s newest quick service restaurant, Quick Chick.

Representatives of the one-year-old Quick Chick visited both offices, which adjoin each other, on Saturday, October 17, 2020, with chicken meal boxes to brighten the day of the front-liners who have been serving Jamaica through long hours and personal sacrifices during the seven-month-long COVID-19 which has impacted the island.

Lunchtime with Quick Chick on Saturday brought smiles to the faces of the lawmen and firefighters, which was the objective of the restaurant located at the Half-Way Tree Transport Centre.

“The police officers and firefighters are real heroes. They put their lives on the line for us daily. Their offices are very close to our store, so on the National Heroes weekend we at Quick Chick wanted to show our appreciation for all they do for so many of us,” said Conley Salmon, Chairman of Quick Chick.

Jason McCook, Marketing Manager for Quick Chick said members of the JCF at the Half-Way-Tree police station expressed appreciation for the gesture. He said a number of them advised that they were regular Quick Chick customers and especially loved the Scotch Bonnet-flavoured spicy chicken.

“They expressed how grateful they were that Quick Chick had decided to visit them during the National Heroes weekend and that they were impressed by the customer service they receive whenever they go to the restaurant to purchase menu items,” McCook said.

According to Acting Assistant Superintendent Nigel Cox of the Jamaica Fire Brigade: “The team members couldn’t get enough. They wanted more! They especially loved the spicy chicken and said they plan to visit the restaurant soon.”