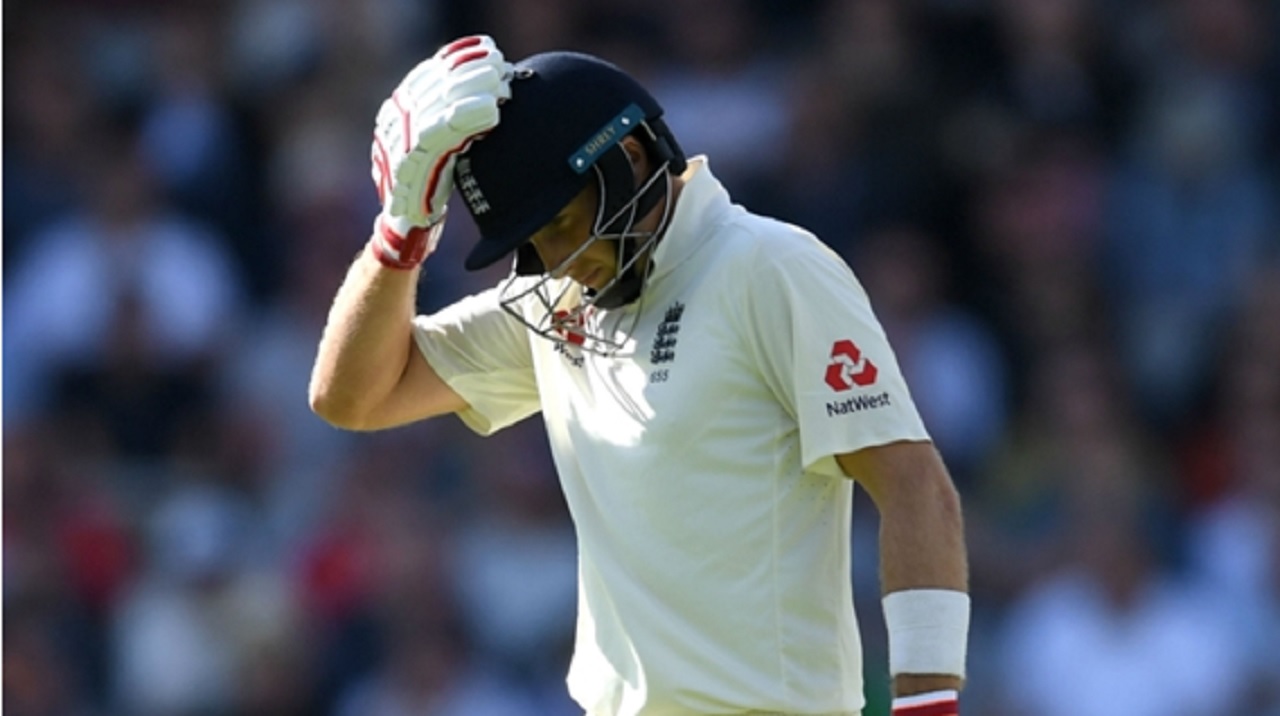 Joe Root reacts after being dismissed against South Africa at Old Trafford.

A determined South Africa attack claimed the key wickets of Alastair Cook, Joe Root and Ben Stokes to leave the fourth and final Test finely poised at Old Trafford, where England reached stumps at 260-6 on the opening day on Friday.

Leading 2-1 thanks to wins at Lord's and The Oval, and seeking at least a draw to wrap up a victory over the Proteas in his first series as captain, Root at 26 became the third youngest batsman in Test history to pass the milestone of 5000 runs, after team-mate Alastair Cook and India great Sachin Tendulkar.

Lady luck had smiled on Root in Manchester, where South Africa wicketkeeper Quinton de Kock inexplicably failed to dive when presented with a routine catch off the bowling of the controlled and dangerous Morne Morkel (1-58).

Having notched his 10th successive Test half-century and appearing ready to accelerate, Root then undid his good work by getting trapped lbw by Duanne Olivier (2-72) for 52.

Cook fell just short of a half-century of his own, departing for 46 on a day that started out by offering plenty for the bowlers, before making them work harder as the pitch dried out.

There was still joy to be found late on, though, evidenced by Kagiso Rabada's potentially crucial dismissal of Stokes, England's top scorer in the innings, for 58 with a sizzling yorker in the penultimate over of the day.

Wicketkeeper-batsman Jonny Bairstow (33 not out) survived to resume on Saturday alongside nightwatchman Toby Roland-Jones, who is yet to face a ball.

South Africa suffered a blow before a ball was bowled when Vernon Philander and Chris Morris were both ruled out through injury, to be replaced by Theunis de Bruyn and Olivier, who was the first man to strike, Keaton Jennings (17) playing forward unconvincingly and steering the first entry in a parade of edges to De Kock in the 13th over.

And that soft dismissal could spell the end for the Durham left-hander at Test level, with the selectors facing a difficult decision ahead of the West Indies series, as attention begins to turn to the make-up of the touring party for the Ashes, which start in Brisbane in November.

Tom Westley joined former captain Cook at the crease and the pair compiled a cautious partnership to reach lunch at 67-1.

Keshav Maharaj (1-54), though, made a major breakthrough early in the afternoon session, using the persistent breeze to elicit enough of a nick from Cook.

Rabada (2-52) then picked up the theme, his combination of line, length and pace gaining a thick outside edge from Westley (29), De Kock effecting a diving catch at full stretch to leave England in trouble at 92-3.

Root and Dawid Malan (18) appeared to have weathered a nasty Rabada spell shortly before tea, but the latter then inexplicably attempted a flashing drive off Morkel and instead offered up yet another edge, taken by Faf du Plessis at second slip.

Root led a charmed life again early in the evening session. Having almost nicked Morkel behind, the captain then followed the bad example set by his departed team-mates in offering a thick edge of his own, only for De Kock to inexplicably fail to dive. Amla at first slip, expecting the keeper to complete a simple catch, made no attempt of his own, the two men helplessly watching the ball sail between them.

After passing 5000 runs by driving Morkel and then bringing up 50, there was no escape for Root when Olivier had him plum in front, but the television umpire did spare Bairstow late in the day, replays appearing to show that an edge from Maharaj did not carry to Dean Elgar.

But further cause for South Africa celebration did arrive with the final ball of the 89th over, Stokes' exit ending a seemingly ominous innings and offering the tourists plenty of reason for hope going into day two as they bid to share the series.