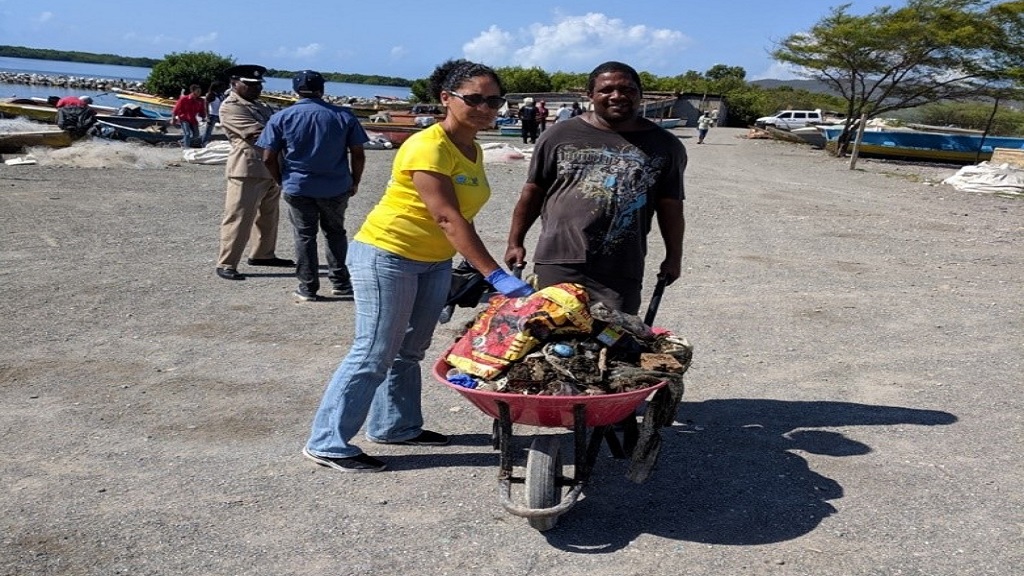 A pre-Easter holiday cleanup of the Hunts Bay Fishing Beach and Complex was deemed a great success by the community. Over fifty people participated in the initiative, which was a partnership among Food For The Poor (FFP) Jamaica, the Hunts Bay Benevolent Fishermen Friendly Society, the Jamaica Constabulary Force Marine Police Division, fishermen, vendors and village residents.

The community effort was not only a boost for the environment but also enhanced economic opportunities for the fishermen and vendors at the beach. It is hoped that the cleanup just before the Easter holiday will encourage more customers to come and buy their fish for the season. The cleanup yielded 80 bags of garbage holding approximately 5,500 lbs. of trash – the majority being plastics and styrofoam.

Fisherman Michael Latchman was elated: “Everybody co-operated today,” he enthused. “We worked together and we now have a clean environment – that is the environment we want to see.” Another fisherman, Mark Lawrence, added, “The customers come in now and they have no complaints. They feel welcome.”

FFP Jamaica’s Manager of Fisheries Sherron Barker pointed out, “The fishermen complain about the garbage, which drifts around Kingston Harbour from the gullies.” The solid waste pollution directly affects the fishers’ livelihoods while degrading the marine environment, he noted.

Pollution in Kingston Harbour is recognized as an ongoing environmental concern affecting people’s lives, which needs to be addressed over the long term. Corporal André Clarke of the Marine Police Division observed, “We see nets coming up with more garbage than fish in them. This is a major concern for us. Today’s cleanup shows what working together can accomplish.”

The fishermen and vendors have pledged to maintain the cleanliness of the beach and were provided with tools, extra garbage bags and bins, as well as refreshments during the day by FFP Jamaica.

Meanwhile, Barker is encouraging the public to support the Hunts Bay Fishing Village, conveniently located on the corner of Portmore Causeway and Dyke Road, by purchasing fresh local catches from the established vendors. “They have good quality fish, caught outside the Harbour,” he noted. Snappers, groupers and grunts are among the fish on sale.

Fisherman Mark Lawrence was gratified by the efforts, describing the environment as “Beautiful, beautiful!” He added, “FFP Jamaica has done a great thing for us.”