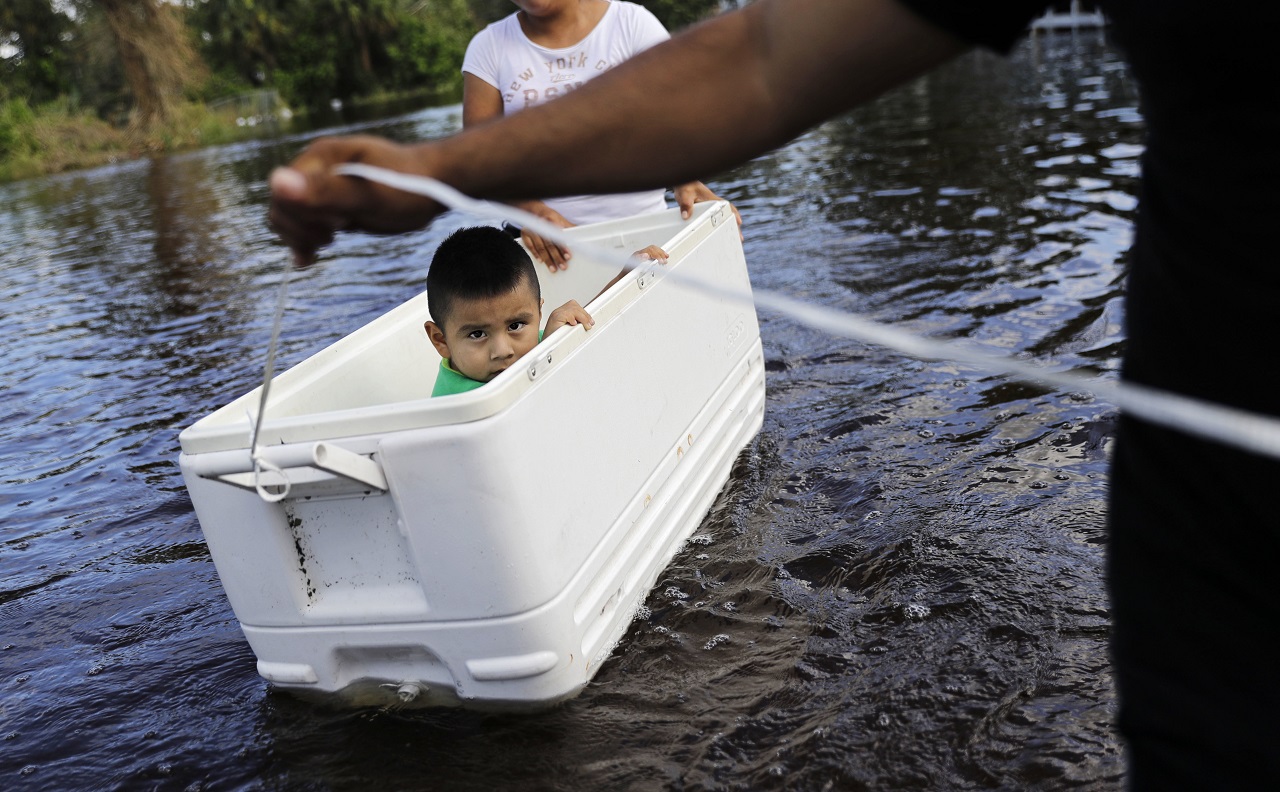 lfonso Jose Jr., 2, is floated down his flooded street by his parents as the wade through water to reach an open convenience store in the wake of Hurricane Irma in Bonita Springs, Fla., Tuesday, Sept. 12, 2017.

Search-and-rescue teams made their way into the Florida Keys' farthest reaches Tuesday, while authorities rushed to repair the lone highway connecting the islands and deliver aid to Hurricane Irma's victims.

Federal officials estimated one-quarter of all homes in the Keys were destroyed.

Two days after Irma roared into the island chain with 130 mph winds, residents were allowed to return to the parts of the Keys closest to Florida's mainland. But the full extent of the death and destruction there remained a question mark because communications and access were cut off in places.

"It's going to be pretty hard for those coming home," said Petrona Hernandez, whose concrete home on Plantation Key with 35-foot walls was unscathed, unlike others a few blocks away. "It's going to be devastating to them."

Elsewhere in Florida, life inched closer to normal, with some flights again taking off, many curfews lifted and major theme parks reopening. Cruise ships that extended their voyages and rode out the storm at sea began returning to port with thousands of passengers.

The number of people without electricity in the late-summer heat dropped to around 10 million — half of Florida's population. Officials warned it could take 10 days or more for power to be fully restored. About 110,000 remained in shelters across Florida.

Seven deaths in Florida have been blamed on Irma, along with four in South Carolina and two in Georgia. At least 35 were killed in the Caribbean.

"We've got a lot of work to do, but everybody's going to come together," Florida Gov. Rick Scott said. "We're going to get this state rebuilt."

Irma's rainy remnants, meanwhile, pushed through Alabama and Mississippi after drenching Georgia. Flash-flood watches and warnings were issued around the Southeast.

While nearly all of Florida was engulfed by the 400-mile-wide storm, the Keys — home to about 70,000 people — appeared to be the hardest hit. Drinking water was cut off, all three of the islands' hospitals were closed, and the supply of gas was extremely limited.

Officials said it was not known how many people ignored evacuation orders to stay behind in the Keys.

"Basically every house in the Keys was impacted," he said.

In Islamorada, a trailer park was devastated, the homes ripped apart as if by a giant claw. A sewage-like stench hung over the place.

Debris was scattered everywhere, including refrigerators, washers and dryers, a 25-foot fishing boat and a Jacuzzi. Homes were torn open to give a glimpse of their contents, including a bedroom with a small Christmas tree decorated with starfish.

One man and his family came to check on a weekend home and found it destroyed. The sight was too much to bear. The man told his family to get back in the car, and they drove off toward Miami.

In Key Largo, Lisa Storey and her husband said they had yet to be contacted by the power company or by city, county or state officials. As she spoke to a reporter, a helicopter passed overhead.

"That's a beautiful sound, a rescue sound," she said.

An aircraft carrier was positioned off Key West to help in the search-and-rescue effort. And crews worked to repair two washed-out, 300-foot sections of U.S. 1, the only highway from the mainland, and check the safety of the 42 bridges linking the islands.

Authorities stopped people and checked for documentation such as proof of residency or business ownership before allowing them back into the Upper Keys, including Key Largo, Tavernier and Islamorada.

The Lower Keys — including the chain's most distant and most populous island, Key West, with 27,000 people — were still off-limits, with a roadblock in place where the road was washed out.

While the Keys are studded with mansions and beachfront resorts, about 13 percent of the people live in poverty and could face big obstacles as the cleanup begins.

"People who bag your groceries when you're on vacation, the bus drivers, hotel cleaners, cooks and dishwashers, they're already living beyond paycheck to paycheck," said Stephanie Kaple, who runs an organization that helps the homeless in the Keys.

Corey Smith, a UPS driver who rode out the hurricane in Key Largo, said it was a relief that many buildings on the island escaped major damage. But he said conditions were still not good, with branches blocking roads and supermarkets closed.

"They're shoving people back to a place with no resources," he said by telephone. "It's just going to get crazy pretty quick."

Lower Keys resident Leyla Nedin said she doesn't plan to return any time soon to her home near where Irma came ashore on Cudjoe Key.

"We are still without water, power, sewer, gas and cell service," she said. "My concern is that even if we get to go in to the Lower Keys, our fragile infrastructure could be even more compromised."

The Latest: Florida east coast may have power back by Sunday

Man suspected of taking own life in Clarendon