Federer vs Nadal, Djokovic vs Bautista Agut at Wimbledon 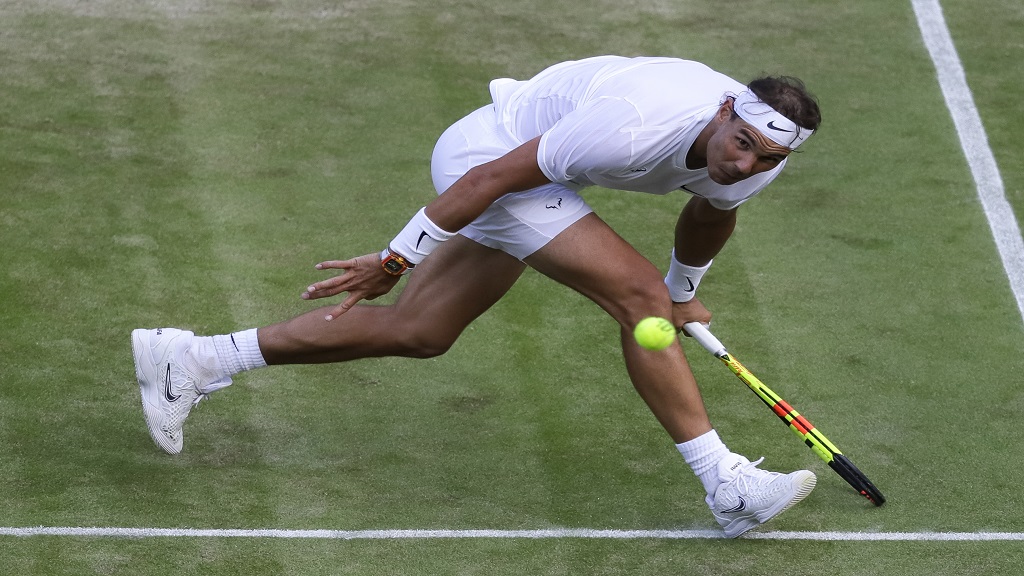 Hard to believe, perhaps, but when Roger Federer and Rafael Nadal meet in the Wimbledon semifinals, it'll be their first matchup at the All England Club since their memorable 2008 final.

Federer and Nadal set up their 40th career showdown by each overcoming a tough opening set in the quarterfinals Wednesday before moving on.

"Obviously, I know people always hype it up," Federer said of his rivalry with Nadal.

Well, why shouldn't they? These are, after all, two of the greatest players in history, winners of more Grand Slam titles than any other men who have played tennis. Of Federer's 20 Grand Slam titles, a record eight came at Wimbledon. Of Nadal's 18 major trophies, 12 came at the French Open, where he routed Federer in the semifinals last month.

This is their fourth matchup at Wimbledon — and first that won't come in the final. Federer beat Nadal for the 2006 and 2007 titles, but Nadal won the championship 11 years ago in a 9-7 fifth set as dusk descended.

"Well, we have a lot of information on Rafa, and so does he about us," Federer said. "So you can either dive into tactics and all that stuff like mad for two days — or you're just going to say: 'You know what? It's grass-court tennis and I'm going to come out there and play attacking tennis.' And if he can defend that, that's too good. And if he can't, well, then, that's good for me." 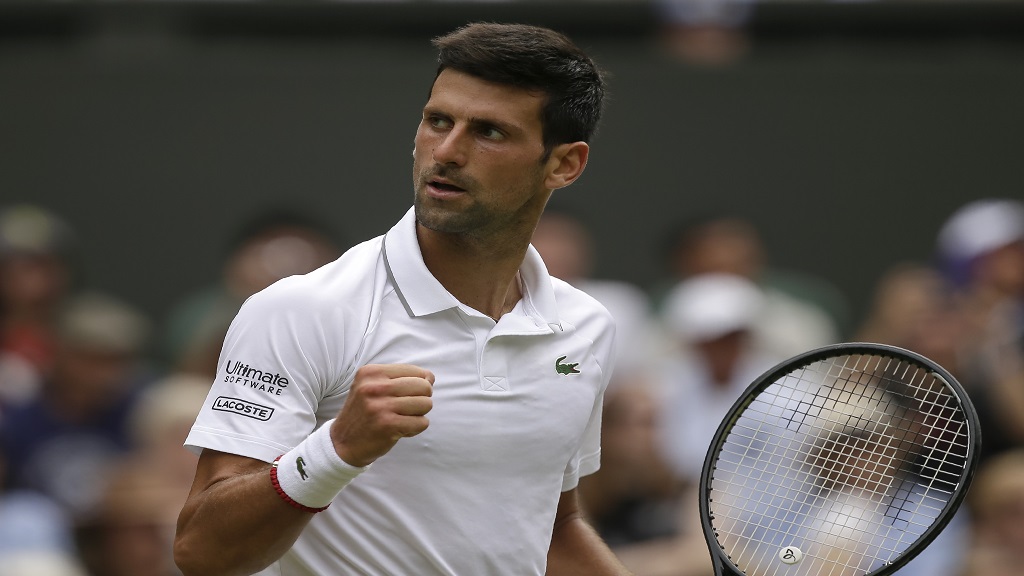 The other semifinal will draw far less attention: No. 1 Novak Djokovic vs. No. 23 Roberto Bautista Agut.

It is the 13th time that the Big Three of Federer, Nadal and Djokovic are in the semifinals at a major tournament together. On 11 of the previous occasions, one of them claimed the title.

Djokovic used a 10-game run to transform what was shaping up as an even, entertaining quarterfinal into a lopsided romp.

"I felt," Djokovic said, "like I managed to dismantle his game."

Down an early break, the defending champion grabbed control midway through the opening set and never let go, overwhelming the 21st-seeded David Goffin 6-4, 6-0, 6-2 to reach his ninth semifinal at the All England Club.

"He was everywhere," Goffin said.

Bautista Agut, a first-time Grand Slam semifinalist, is supposed to be on the island of Ibiza right now, having a bachelor party with a half-dozen pals ahead of his November wedding. Instead, he will play on after beating No. 26 Guido Pella of Argentina 7-5, 6-4, 3-6, 6-3.

"Well," the 31-year-old Bautista Agut said, "it feels better to be here in London."

He and Nadal give Spain two men's semifinalists at Wimbledon in the same year for the first time.

Nadal won in straight sets, but it wasn't always easy. He wasted three set points at 5-3 in the opener, then another before getting broken when serving for it at 5-4. And again serving for that set at 6-5, he erased a trio of break points for the 65th-ranked Querrey before holding — and Nadal was on his way. 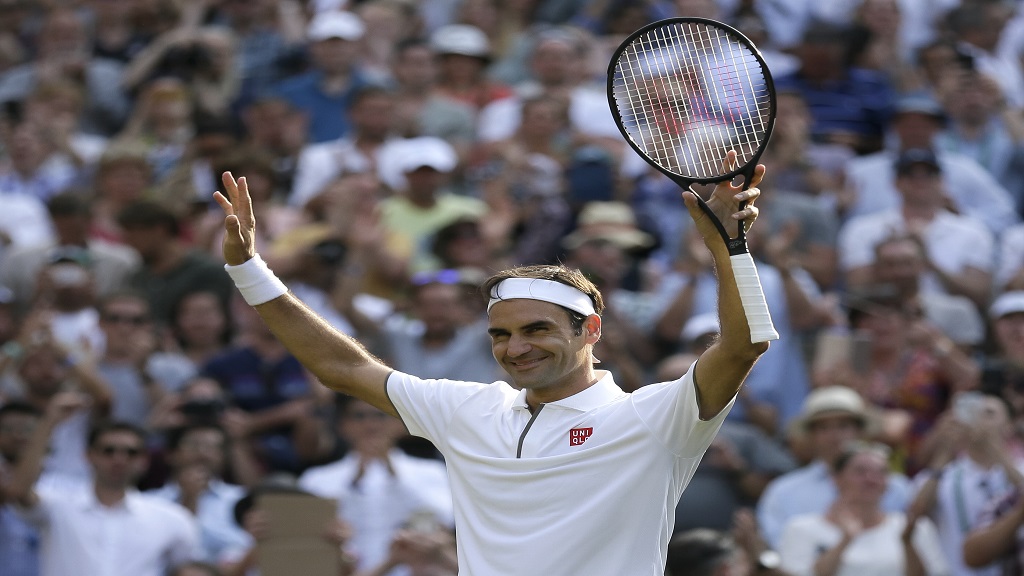 As Federer made his way off Centre Court after moving into the tournament's semifinals for the 13th time, a spectator reminded him of yet another milestone. He is the first player to win 100 matches at one Grand Slam tournament.

Just another mark among many for the guy.

The eighth-seeded Nishikori jumped out to an early edge by breaking Federer in the very first game, enough to give him that set.

"The beginning," Federer said, "was brutal."

But he quickly turned things around in the second, conjuring up whatever he wanted, exactly when he wanted it.

His approach shots were beyond reproach. His volleys vibrant. His returns were timed so well, and struck so violently, that one knocked the net-rushing Nishikori's racket plum out of his hands.

And Federer's serve? Sure, he faced break points, but he never allowed 2014 U.S. Open runner-up Nishikori to convert another.

Goffin started well enough against Djokovic on an afternoon that was humid and sunny, with the temperature in the mid-70s (mid-20s Celsius).

Hoping to reach his first major semifinal, Goffin claimed three of the first four points that lasted at least 10 strokes. He won the pair's most recent encounter, on clay in 2017, and this looked a bit like it was being contested on that slower surface, too.

Goffin was able to hang in there at the baseline and his on-the-run passing shots were dialed in. He nosed ahead after 33 minutes by breaking to go up 4-3, then jogged to the sideline with a raised fist.

Until then, Goffin was playing crisply and cleanly. He hadn't faced so much as one break point against Djokovic, generally considered the top returner in the game.

"He was dictating the play from the baseline," Djokovic said afterward. "Most of the rallies went his way."

But that's when everything changed.

Djokovic did to Goffin exactly what he does to so many men on so many surfaces and at so many tournaments: He takes their best shot, deals with it and then wears them down.

"I sincerely hope," Djokovic said, "that my opponent feels like he's got to work twice as (hard as) against any other opponent to win a point."

Dream team Serena and Murray march into third round