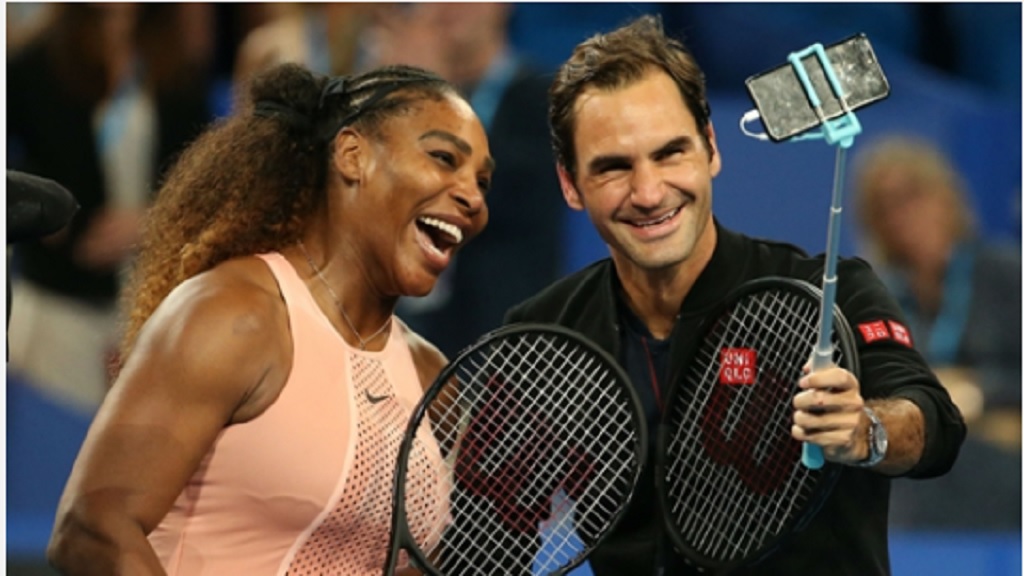 Serena Williams and Roger Federer pose for a selfie after their Hopman Cup meeting.

Roger Federer took a blow to the ear but came out on top in his first encounter with Serena Williams in the Hopman Cup on New Year's Day.

Two of the all-time greats shared a court in the twilight of their long, illustrious careers and it was the mixed doubles pairing of Federer and Belinda Bencic who were victorious for Switzerland over United States duo Williams and Frances Tiafoe in Perth.

Williams then made a swift return for what she said would be a "dream" match against Federer, which the defending champions won 4-2 4-3 (5-3).

There were smiles all-round for much of an entertaining contest, even when Tiafoe felt the force of a Federer backhand to the midriff before the 20-time grand slam champion was hit on the ear by a volley from the 20-year-old.

Federer, who has now won all four matches in the event, and 23-time major champion Williams again spoke of their mutual respect after finally going head to head.

Williams said in an on-court interview standing alongside Federer: "It was a great experience, I'm kind of sad it's over, I was just warming up.

"It was so much fun, for me it was super cool. I've literally wanted to take pics, bring my baby out, I was way too excited.

"The guy is great, he's the greatest of all time both on and off the court, he has such charisma. I think his serve is super underestimated, you can't read it. Hopefully I can get some tips later."

Federer said: "I was nervous returning, because you just don't know. People talk about her serve so much and I see why it is such a wonderful serve. You just can't read it."

Federer replied "yours is a bit better" after Williams said she could not read his serve.

He added: "For me it was a bit nerve-racking, because all of a sudden you are serving, especially the last serve at 3-3, I'm telling myself I need to win this point, but it's Serena Williams. I was telling myself this is maybe what I've always wanted, a big-time moment like this. I made the serve, but I totally missed the target - thank you for missing the ball.

"It was great, great fun. Great champion, you see how focused and determined she is and I love that about her."