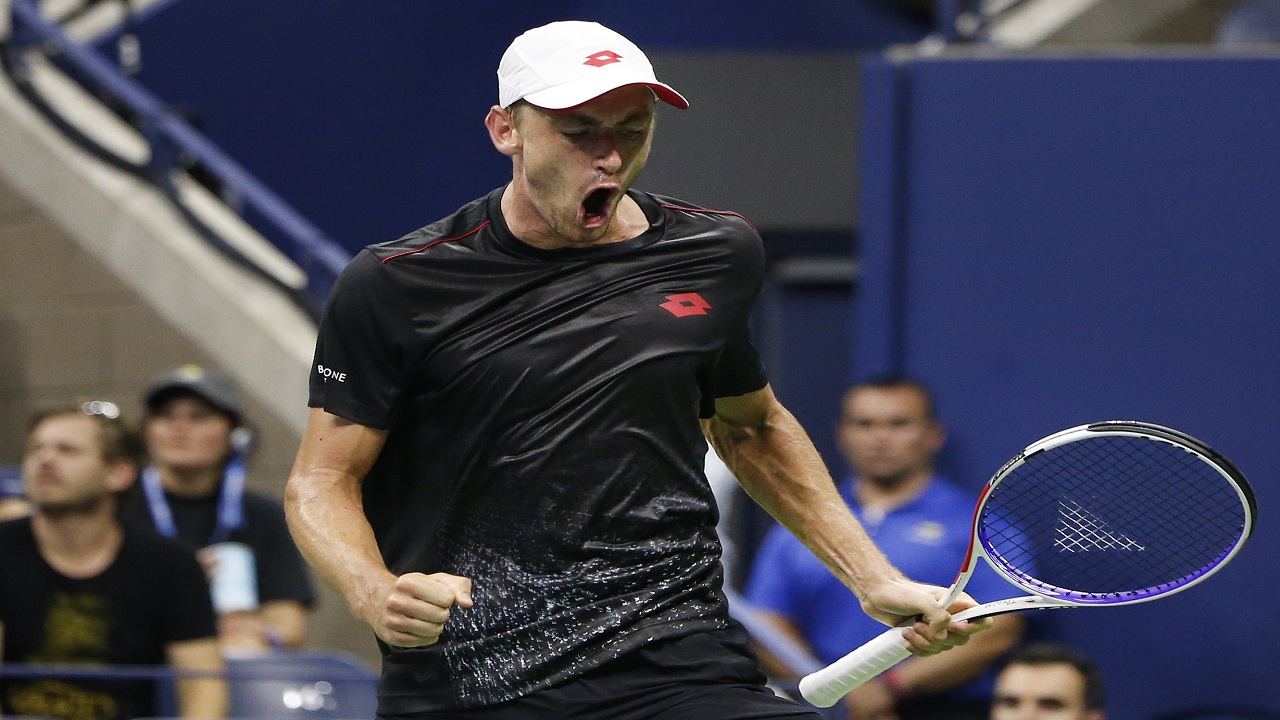 John Millman, of Australia, reacts after winning a point against Roger Federer, of Switzerland, during the fourth round of the U.S. Open tennis tournament, Monday, Sept. 3, 2018, in New York.

Roger Federer served poorly. He volleyed poorly. Closed out sets poorly, too. And now he's gone, beaten at the U.S. Open by an opponent ranked outside the top 50 for the first time in his illustrious career.

Looking slow and tired on a sweltering night in Arthur Ashe Stadium, the No. 2-seeded Federer double-faulted 10 times, failed to convert a trio of set points and lost 3-6, 7-5, 7-6 (7), 7-3 (3) in the fourth round to John Millman in a match that began Monday and concluded at nearly 1 a.m. on Tuesday.

To Federer, it was all about the heat and the humidity. With the temperature in the 80s, even with the sun down, and the humidity at about 75 percent, he was unable to summon his usual verve.

"Was just one of those nights where, I guess, I felt I couldn't get air. There was no circulation at all. I don't know, for some reason I just struggled in the conditions tonight. It's one of the first times it's happened to me," the 37-year-old Federer said. "It's uncomfortable. Clearly just keep on sweating more and more and more and more as the match goes on. You lose energy as it goes by. But John was able to deal with it better." 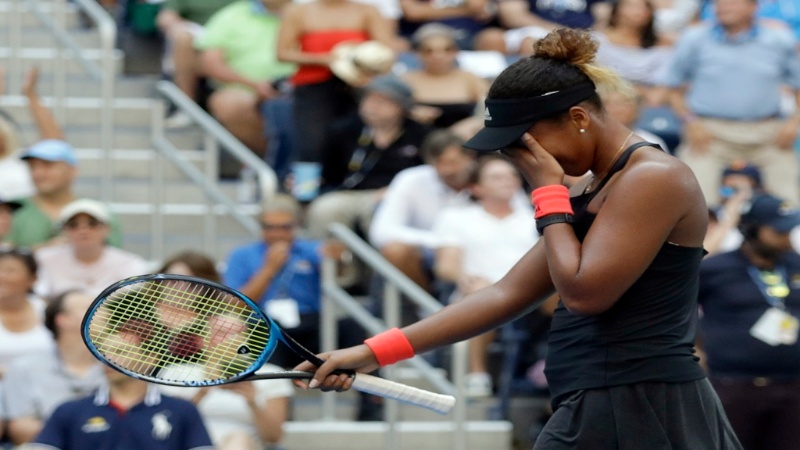 Naomi Osaka, of Japan, reacts after defeating Aryna Sabalenka, of Belarus, during the fourth round of the U.S. Open tennis tournament, Monday, Sept. 3, 2018, in New York.

It's only the second time in Federer's past 14 appearances at the U.S. Open that he's lost before the quarterfinals. He is, after all, a five-time champion at the tournament, part of his men's-record haul of 20 Grand Slam titles.

"In all honesty, Roger's a hero of mine. I look up to him," said Millman, an Australian who is 29. "I felt a little bit guilty today, because he didn't have his best day, and that's for sure. I know that. I'm very aware he didn't have a great day in the office. Probably, to beat him, I needed him to have an off-day and I needed to have a decent, good day."

So much for that highly anticipated matchup between Federer and 13-time major champion Novak Djokovic in the quarterfinals. Instead, it'll be the 55th-ranked Millman, who had never made it past the third round at a Slam until last week, taking on No. 6 seed Djokovic.

Hours before, Djokovic left the court for a medical timeout — the second time during the tournament he's sought help from a doctor because of harsh weather — during what would become an otherwise straightforward 6-3, 6-4, 6-3 victory over 68th-ranked Joao Sousa of Portugal.

"I'm not 21 anymore. That was 10 years ago. I still don't feel old. But at the same time, there is a little biological clock that is not really working in your favor," Djokovic said. "Sometimes, you just have to survive." 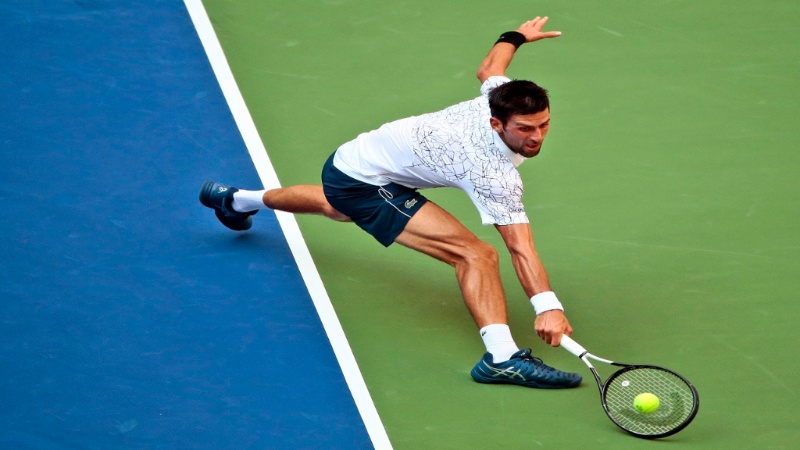 Novak Djokovic, of Serbia, returns a shot to Joao Sousa, of Portugal, during the fourth round of the U.S. Open tennis tournament, Monday, Sept. 3, 2018, in New York.

He reached the quarterfinals for an 11th consecutive appearance in New York as he bids for a third U.S. Open championship and 14th Grand Slam trophy.

The other quarterfinal on the bottom half of the draw will be a rematch of the 2014 U.S. Open final: No. 7 Marin Cilic against No. 21 Kei Nishikori.

Millman was adamant he would not be intimidated by Federer, and perhaps was helped by having spent time practicing together a few months ago ahead of the grass-court portion of this season.

"I love his intensity," Federer said.

Still, this was a stunner. Not simply because Federer lost — he entered the day 28-0 at the U.S. Open, and 127-1 in all Grand Slam matches, against foes below No. 50 in the ATP rankings — but how he lost. Start with this: Federer held two set points while serving for the second at 5-4, 40-15 and did not pull through. Millman knew that was the turning point.

"At the start, I don't think I was playing so well," said Millman, who said he was sweating so much he had a hard time holding onto his racket. "But, yeah, as the match went on, I felt more comfortable, felt pretty good."

Then Federer had a set point in the third at 6-5 in the tiebreaker, but again was stymied.

In the fourth set, he went up a break at 4-2, yelling "Come on!" and getting all of those rowdy spectators in their "RF" gear on their feet, prompting the chair umpire to repeatedly plead for silence. But Federer uncharacteristically got broken right back with a sloppy game, most egregiously when he slapped what should have been an easy putaway into the net.

And then there was his serve. He put only 49 percent of his first serves in play, including a hard-to-believe 31 percent in the second set. This is a guy whose combination of precision and power on that stroke is considered as good as anyone's ever.

In the final tiebreaker, he double-faulted twice in a row. The first obvious signs of trouble for Federer came far earlier, in the second game of the second set. He started that 15-minute struggle by missing 18 of his initial 20 first serves. While he eventually held there, he needed to save seven break points along the way. It was clear Federer was not at his best.

Millman's big rips on groundstrokes didn't help matters. Nor did his steeliness despite not being all that familiar with this sort of success or setting. This is a guy who had never managed to beat a top-10 player, let alone a man who has spent more weeks at No. 1 in the ATP rankings than anyone else.

As the unforced errors mounted — Federer would finish with 77, compared to Millman's 28 — Federer's wife, Mirka, couldn't bear to look, placing her forehead on her hands in the guest box in the stands.

Federer hung his head at a changeover, a little black fan pointed right at his face, but nothing seemed to make him feel like himself.

"When you feel like that," Federer said, "everything is off."

Serena no longer allowed to wear catsuit at French Open