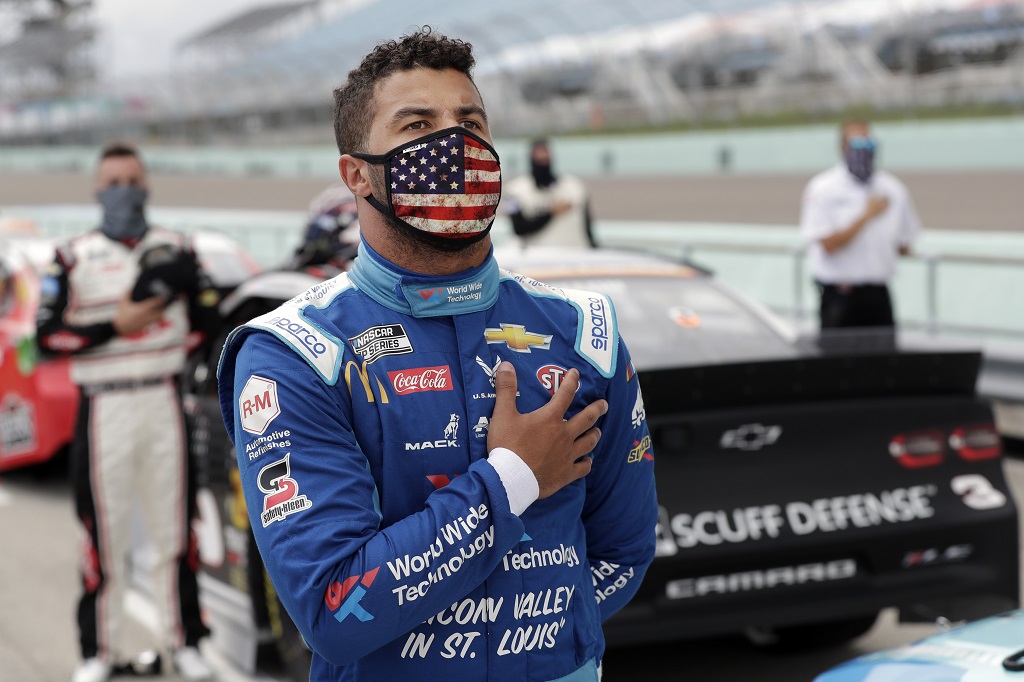 Authorities said Monday that the FBI is investigating the discovery of a noose found in the Talladega Superspeedway garage stall of Bubba Wallace and the governor of Alabama condemned the act against NASCAR's only black full-time driver.

Wallace two weeks ago successfully pushed NASCAR to ban the Confederate flag at its venues, though the sanctioning body has not outlined plans on how it will enforce the restriction.

Disgruntled fans with Confederate flags drove past the main entrance to the Alabama race track prior to Sunday's race, while a plane flew above the track pulling a banner of the flag that read "Defund NASCAR."

Hours after the race was postponed by rain, NASCAR said the noose had been found. 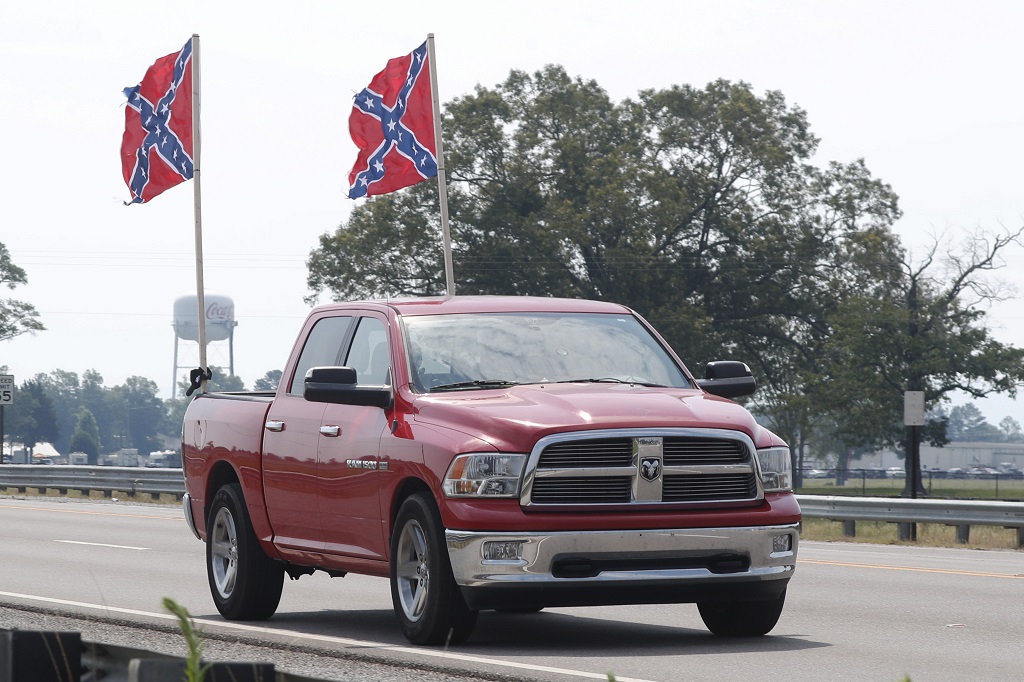 (A truck flying Confederate flags passes by the Talladega Superspeedway prior to the NASCAR Cup Series auto race at the in Talladega Ala., Sunday June 21, 2020 (AP Photo/John Bazemore)

The sanctioning body vowed to do everything possible to find who was responsible and "eliminate them from the sport."

It has not offered other details.

The FBI field office in Birmingham did not immediately return a message left by The Associated Press.

The incident has rocked NASCAR, which returned to racing just last month because of the coronavirus pandemic.

"We are angry and outraged, and cannot state strongly enough how seriously we take this heinous act," the series said in a statement. "As we have stated unequivocally, there is no place for racism in NASCAR, and this act only strengthens our resolve to make the sport open and welcoming to all."

The stock car series, founded in the South more than 70 years ago, has tried to distance itself from the flag for years at the risk of alienating a core group of its fan base.

It went ahead with the ban as the nation grapples with social unrest largely tied to George Floyd, an unarmed black man who died in the custody of Minneapolis police.

"God help us," NASCAR driver Michael McDowell tweeted after word of the noose went public. "The level of evil it takes to do something like this is disgusting. This is enraging and heartbreaking all at the same time."

Alabama Governor Kay Ivey said she was "shocked and appalled" by the "vile act" against Wallace, an Alabama native.

"There is no place for this disgusting display of hatred in our state," Ivey said. "Bubba Wallace is one of us; he is a native of Mobile and on behalf of all Alabamians, I apologise to Bubba Wallace as well as to his family and friends for the hurt this has caused and regret the mark this leaves on our state." 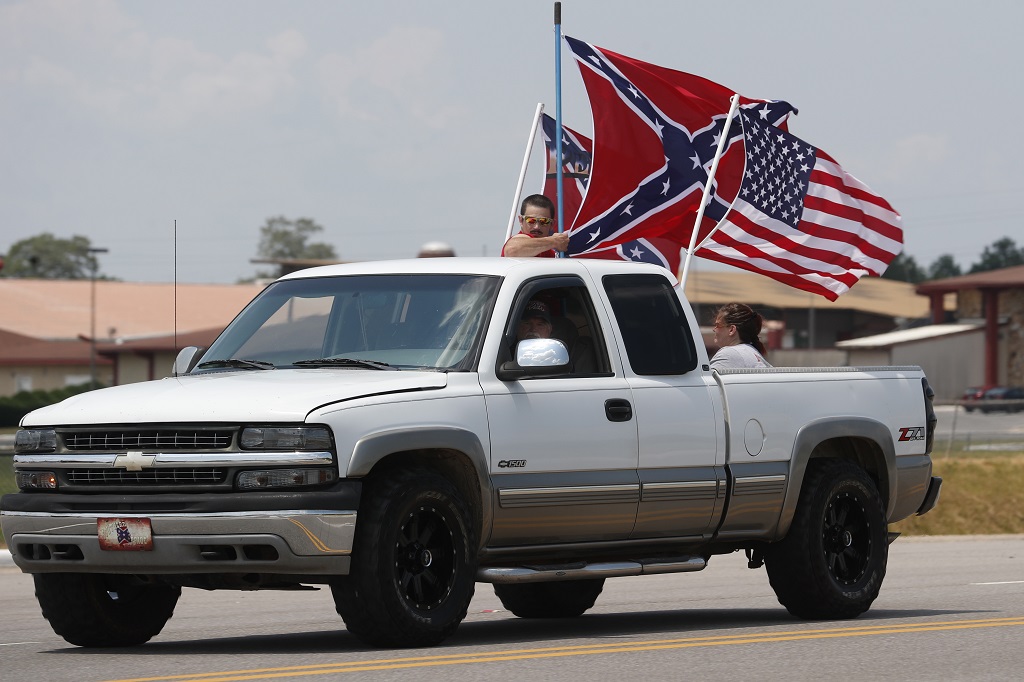 (Race fans fly Confederate battle flags and a United States flag as they drive by Talladega Superspeedway prior to a NASCAR Cup Series auto race in Talladega Ala., Sunday, June 21, 2020. (AP Photo/John Bazemore)

Reaction from Wallace's fellow drivers was immediate as they prepared for the rescheduled race Monday afternoon.

Retired champion Jeff Gordon called it a "cowardly" act and Ryan Blaney, one of Wallace's closest friends, tweeted: "You're my brother and always will be. Don't let the people who are lower than life to try and bring you down."

The 26-year-old Wallace has not commented since a statement on social media late Sunday in which he said the "the despicable act of racism and hatred leaves me incredibly saddened and serves as a painful reminder of how much further we have to go as a society and how persistent we must be in the fight against racism."

"As my mother told me today, 'They are just trying to scare you,'" he wrote. " This will not break me, I will not give in nor will I back down. I will continue to proudly stand for what I believe in."

Wallace has worn a shirt that says "I Can't Breathe" over his firesuit and his No 43 — made famous by Hall of Famer Richard Petty — sported a Black Lives Matter paint scheme in a race last month in Martinsville, Virginia.

Wallace previously told AP that NASCAR had assigned him a pair of sheriff's deputies for security at Martinsville after he called for a ban of the flag.

Petty was expected to be at Monday's race to support Wallace. Petty, who turns 83 next month, has not attended any races during the pandemic.

Wallace said he has found support among fellow drivers for his stance on the flag.

He noted that in his tweet after the noose announcement.

"Over the last several weeks, I have been overwhelmed by the support from people across the NASCAR industry including other drivers and team members in the garage," he said.

"Together, our sport has made a commitment to driving real change and championing a community that is accepting and welcoming of everyone. Nothing is more important and we will not be deterred by the reprehensible actions of those who seek to spread hate."

Five years ago, former NASCAR chairman Brian France tried to ban flying the flags at tracks, a proposal that was not enforced and largely ignored.

This year was different and it was Wallace who led the charge. Wallace, whose father is white, was not always outspoken about racism; even after Floyd was killed last month, he was not the first driver to speak out for racial equality.

He has said he began to find his public voice on racism after watching a video in May of Ahmaud Arbery's fatal shooting in Georgia.

He said he now recognises he must not let his platform as a prominent driver go to waste.

Talladega is one of the more raucous stops on the NASCAR schedule, but the pandemic prompted the series, like all sports, to ban or sharply limit fans for months.

With only 5,000 fans allowed in, the scene this week was a dramatic departure from the Talladega norm with plenty of room for social distancing and fans asked to wear masks.

Fans were not granted access to the infield or the restricted area of the Cup Series garage.

Under strict new health guidelines, a very limited number of people can access the garage where the cars are kept.

That would include crew members for each of the 40 teams, NASCAR employees, Talladega staff members and any contracted safety crews or security guards.

Drivers are not even permitted to enter the garage, instead going directly from their motorhomes to the race cars to drive.

They were never called to the cars Sunday because of rain.