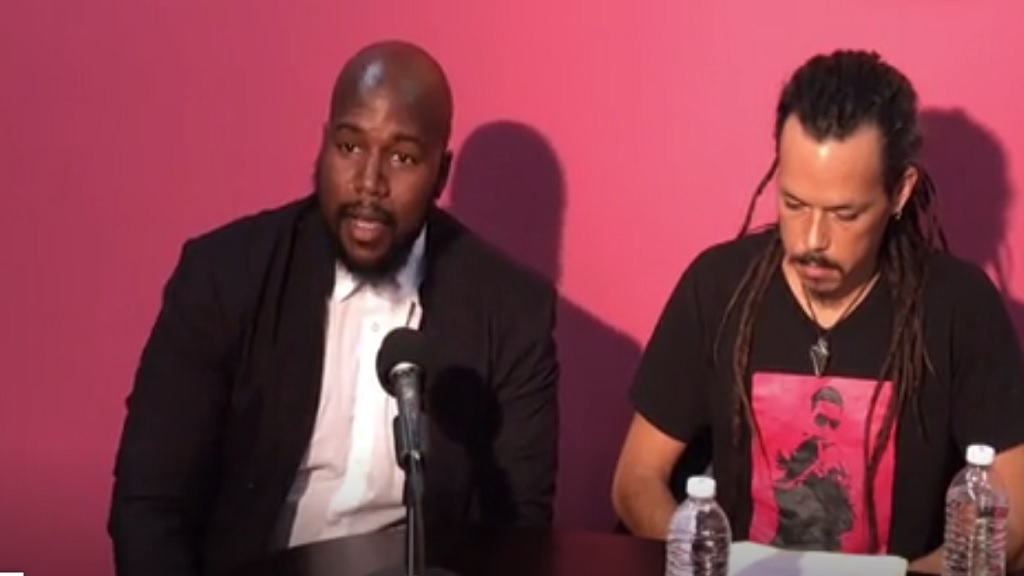 Attorney Ludlow Blact (left) and a member of the Worton family at a press conference at Maxfield Avenue in St Andrew on Tuesday.

The family of one of three men who perished in a 2016 plane crash minutes after take-off from the Tinson Pen Aerodrome in St Andrew, say they are now finalising plans to take legal action against the Caribbean Aviation Training Centre.

An attorney for relatives of the victim said the family came to the decision after carrying out an extensive review of an accident report on the incident, including the plane that crashed, and from that review, the lawyer said some startling findings emerged.

“Based on the findings from the report (about the crash, and my review of the report as the attorney for the Worton family) we believe that we are at a point now where we have to take legal action,” said attorney Ludllow Black during a press conference at Maxfield Avenue in St Andrew on Tuesday.

The attorney told Loop News that he will be filing a suit in the Supreme Court in the coming weeks, with the cause of action being ‘gross negligence’.

Family members, in a press release issued after the press conference, of which a video is carried below, said on November 10, 2016, three young men - Ramon Forbes, Danshuvar Gilmore and Jonathan Worton - met an untimely death.

Reports are that what began as a routine flight training exercise with Worton as the pilot in command, turned tragic when the Cessna 172 airplane lost altitude shortly after take-off, and slammed into a house in the Greenwich Town community off Marcus Garvey Drive in St Andrew.

No one was injured on the ground, but the three occupants of the plane perished.

Based on the crash site in the community, which is relatively close to the Tinson Pen aerodrome, it is suspected that the plane lost engine power while climbing at an altitude too low to safely glide back to the runway.

The family members in the press conference that was organised by attorney Black, said the young aviators attempted to take off in a plane that has been revealed to have been faulty and not airworthy.

“The engine tear-down revealed an incorrect valve, incorrect engine timing settings and corroded, worn parts, making the accident inevitable, as the engine did not have the potential of making the required horsepower,” the press release stated.

“Engine failure at low altitude during take-off does not leave many options in a heavily-populated residential environment bordered by an oil refinery, a four-lane highway and a busy, heavily-trafficked north-south road from the port, such as East Avenue in Greenwich Farm,” elaborated the release.

"The families of these young aviators are demanding that justice be served and the laws of this land are upheld,” he added.