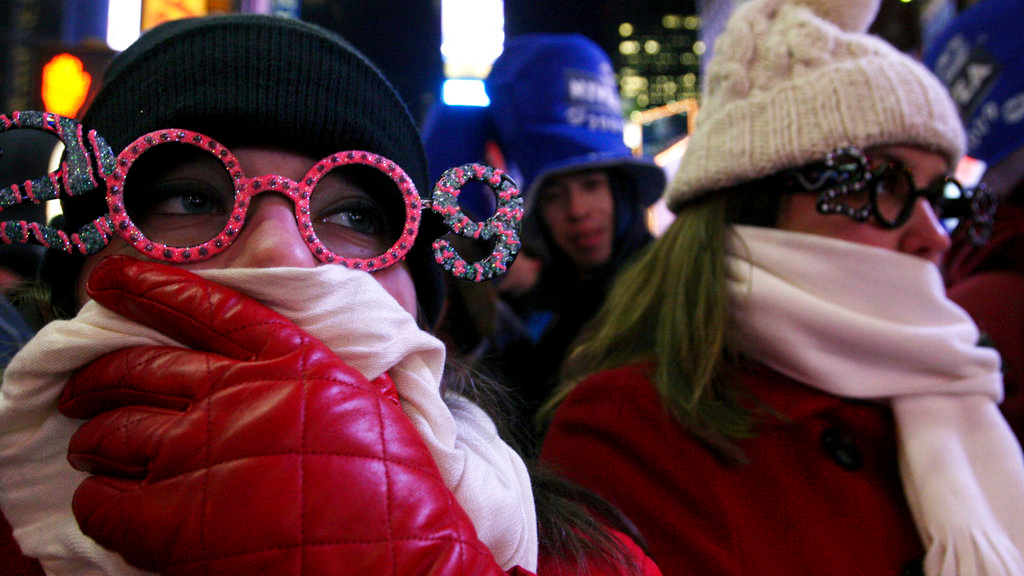 FILE- In this Dec. 31, 2008 file photo, Allison Smith of Jacksonville, Fla, left, tries to keep warm as she and others take part in the New Year's Eve festivities in New York's Times Square. Brutal weather has iced plans for scores of events in the Northeast U.S. from New Year’s Eve through New Year’s Day, but not in New York City, where people will start gathering in Times Square up to nine hours before the famous ball drop. (AP Photo/Tina Fineberg, File)

Dress in layers, lay off the booze and bring some hand warmers. Those are some of the tips offered for the huge crowd of revelers expected in Times Square for what could be one of the coldest New Year's Eve ball drops on record.

Brutal weather has iced plans for scores of events in the Northeast from New Year's Eve through New Year's Day, but not in New York City, where people will start gathering in Times Square up to nine hours before the famous ball drop.

"Hundreds of thousands have withstood very cold weather over the years for a once-in-a-lifetime experience, and we expect this year to be no different," said Tim Tompkins, president of the Times Square Alliance which puts on the event.

The coldest New Year's Eve in Times Square came in 1917, when it was 1 degree at midnight. This year, the forecast is for 11 degrees with a wind chill around zero, which would tie for second with 1962.

City and state health officials are advising people to cover all exposed skin, and wear a hat, scarf and gloves. Drinking alcohol is discouraged because it causes the body to lose heat faster.

Extra New York Fire Department personnel are going to be on hand to provide medical support and a National Weather Service meteorologist will be on site with the city's emergency management officials to monitor weather conditions.

In other areas gripped by the cold, some events are being canceled or reconsidered. The annual Lobster Dip at Old Orchard Beach in Maine has been rescheduled for the first time in 30 years.

Organizers of the Penguin Plunge in Narragansett, Rhode Island, say it's still on for New Year's Day but advised the thousands of expected participants to "use their good judgment" and avoid taking the plunge if they have a medical condition or have been sick.

With temperatures only expected to reach 9 degrees in Springfield, Illinois, on Sunday, organizers of its annual New Year's Eve fireworks display have decided to cancel this year's show. Officials say they plan to reschedule it for a warmer date.

In Ohio where some communities saw digit temperatures on Saturday, fireworks have been canceled and events moved inside in Miami Township and the New Year's Eve ball drop and other activities in New Carlisle have been reduced to an hour.

Despite the drawn-out deep freeze across Pennsylvania, officials said Saturday the annual New Year's Day Mummers Parade will still be held. The event features thousands of performers in colorful costumes adorned with sequins and feathers strutting through Philadelphia's streets.

The village of Orchard Park near Buffalo, New York, has canceled its New Year's Eve event because subzero temperatures have been forecast. "With frigid weather, the chance of a water line break is higher, and I'd rather have my public works crew fixing it than hoisting a ball up to drop," said Mayor Jo Ann Litwin Clinton.

At Long Lake in the heart of New York state's Adirondack Park, intrepid souls in swimsuits or funny costumes will jump into frigid water through a hole cut by the fire department for the fifth annual Polar Plunge, a fundraiser for High Peaks Hospice. With temperatures expected to top out around 13 degrees, the rescue squad will be checking participants' blood pressure and buses will provide warm shelter, said Alexandra Roalsvig, the town's director of recreation and tourism.

"People get excited about the cold here; we grew up with it," Roalsvig said. "We're counting on a good cold winter and snow because we're so reliant on snowmobiling for the winter economy."

WATCH: Extreme cold in northeastern US