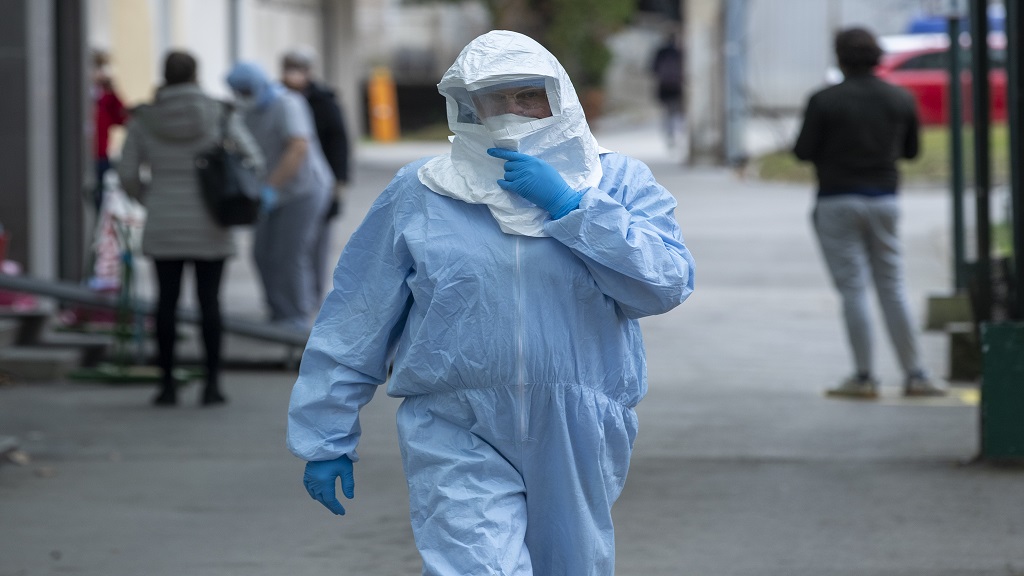 A health worker wears protective suit at the infectious disease clinic in Zagreb, Croatia, where the first coronavirus case in Croatia is hospitalized, Tuesday, Feb. 25, 2020. Croatia confirmed its first case of coronavirus in a man who had been to Milan, the capital of Lombardy, Italy. (AP Photo/Darko Bandic)

US health officials warned Tuesday that the burgeoning coronavirus is certain to spread more widely in the country at some point, even as their counterparts in Europe and Asia scrambled to contain new outbreaks of the illness.

The CDC's call for Americans to be prepared added new urgency to response efforts that, until this week, focused on a disease largely confined to China, where it apparently originated, and neighboring countries.

In other developments Tuesday:

— New clusters of the illness popped up far from China, causing increased concerns for officials in some of the wealthiest nations in Europe and Asia, as well as in countries with far fewer resources. But many remained uncertain about how best to contain it.

The new outbreaks were reported in places as far-flung as Italy and Iran, France and Algeria, and Spain’s Canary Islands. The tiny Persian Gulf nation of Bahrain said it had 17 cases, including a school bus driver who had transported students as recently as Sunday.

In Iran, the head of the country’s virus task force, who just a day earlier had urged the public not to overreact about the spread of the disease, tested positive himself. The official, Iraj Harirchi, posted a new video online, promising authorities would bring the virus under control within weeks.

But a ministry spokesman, Kianoush Jahanpour, said it could take at least until the Persian New Year's holiday on March 20, or as long as late April, to contain the disease. “We don't expect a miracle in the short term,” he said.

— Officials in South Korea said they were racing to contain an outbreak that has grown to nearly 1,000 cases.

“It’s a matter of speed and time: We must create a clear turning point within this week,” President Moon Jae-in said. In the largest cluster, in the city of Daegu and nearby towns, many shops remained closed Tuesday and activity in some neighborhoods came to a near standstill.

On a US military base in Daegu, the center of infections in South Korea, officials said a 61-year-old widow of a US service member had also been infected. It was the first known case among people related to the thousands of US troops stationed in the country.

— The virus' toll continued to mount, even as Chinese officials reported a slowing in the number of new cases. As of Tuesday, the spread of the illness had sickened some 80,000 people worldwide and caused about 2,700 deaths.

The vast majority of those infections remain in China, where 518 new cases were reported Tuesday and another 71 deaths, 68 of them in the central city of Wuhan, where the epidemic was first detected in December. The updates bring mainland China's totals to 77,780 cases and 2,666 deaths, according to the World Health Organization.

WHO said the fatality rate was between two per cent and four per cent in Wuhan and 0.7 per cent elsewhere in China.

Dr Bruce Aylward, the WHO envoy who led a team just back from China, told reporters Tuesday the reason for the large discrepancy was partly because the disease hit Wuhan early and fast, when “people didn’t know what we were dealing with, were learning how to treat this.”

At the beginning of the outbreak, “people were finding severe disease, that’s why the alarm bell went off,” Aylward said. But now with more aggressive testing, mild cases are being diagnosed and isolated.

— In Italy’s north, where more than 200 people were sickened, a dozen towns were sealed off and police wearing face masks patrolled. Italian Health Minister Roberto Speranza huddled in Rome with counterparts from bordering countries — France, Switzerland, Austria and Slovenia — as well as with those from Germany and Croatia, two countries whose citizens are among frequent visitors to Italy. Among the shared points of view emerging from the meeting, Speranza told reporters, was this one: “Closing borders is inappropriate” as a response. Italian officials reported 322 cases of the virus, including 11 deaths.

Croatia and Austria reported their first cases of the virus. And an Italian doctor staying at a hotel in the Canary Islands tested positive for the virus, prompting the quarantine of hundreds of guests.

Croatia, Hungary and Ireland advised against traveling to Italy’s affected area, one of a number of government moves seeking to limit further exposure.

— The virus' spread fueled apprehension in world financial markets. In the US, stock indexes piled on a second consecutive day of losses, falling more than three per cent. Investor fears that the outbreak will slow the world economy drove increased demand for low-risk US government bonds.

“It’s the combination of South Korea, Japan, Italy and even Iran” reporting virus cases, said Yung-Yu Ma, chief investment strategist at BMO Wealth Management. “That really woke up the market, that these four places in different places around the globe can go from low concern to high concern in a matter of days and that we could potentially wake up a week from now and it could be five to 10 additional places.”

— Uncertainly remained over how best to stem the spread of the illness. Italy had taken Europe’s most stringent preventative measures against COVID-19, the disease caused by the virus, and yet became home to the biggest outbreak outside Asia. Experts in Japan, with one of the world’s most sophisticated health systems, acknowledged the country’s handling of the virus-stricken Diamond Princess cruise ship was flawed and could have allowed the problem to magnify.

Japanese officials said they would urge a change to the country's deeply ingrained work culture in a bid to stem the illness. The government urged employers to allow workers to telecommute and have more flexible hours, simple moves Japanese Prime Minister Shinzo Abe expressed hope could help control the spread.

US announces 15th coronavirus case, this one in Texas as evacuee

Ralph Lauren: 4Q sales hit of up to US$70 million from coronavirus