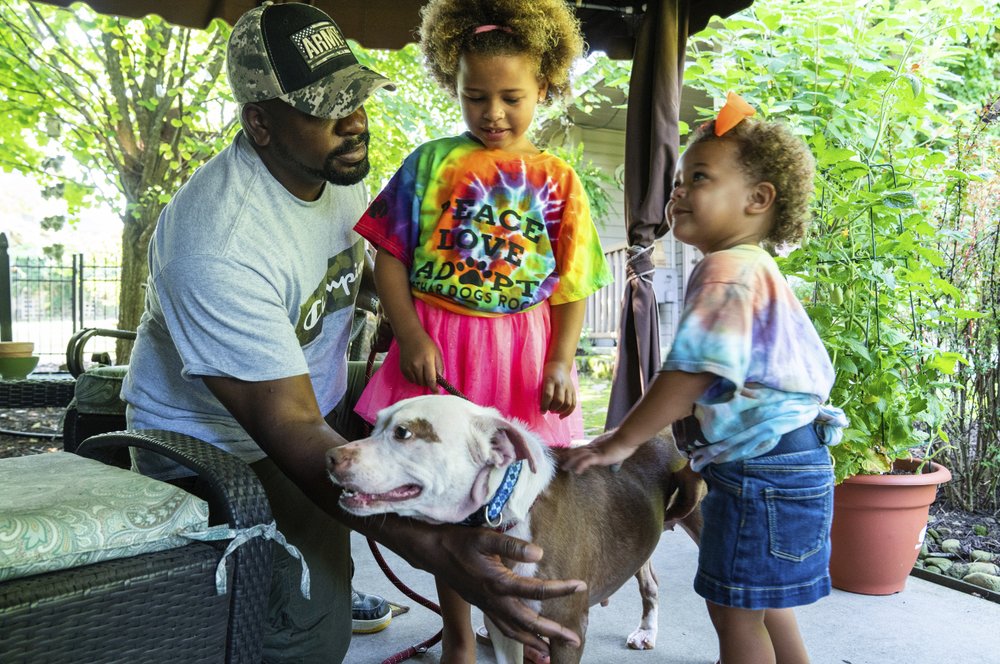 When he was 18, Omar Brooks left home in Canonsburg to enlist in the Army.

His training took him to Fort Stewart in Georgia, where every morning after reveille at ‘0630’, the soldiers of the 3rd Infantry Division sang ‘Dogface Soldier’ — a World War II paean to the grit of the grunts.

‘... I’m just a dogface soldier, with a rifle on my shoulder, and I eat raw meat for breakfast every day ...’

The 3rd Division was among the first wave of ground forces to invade Iraq from Kuwait, and Brooks was the first from his platoon to drive across the border in a vehicle armed with eight missiles and a .50-caliber machine gun.

He dodged bullets and lost friends and struggled with post-traumatic stress disorder after leaving the service in 2003.

He struggled for 15 years to fill the hole in his soul left by his military service.

Then, two years ago, this dogface soldier started working with Bridge to Home Animal Rescue in Eighty Four, Washington County.

Fostering dogs and finding them homes have helped Brooks, now 40 and a state corrections officer, to navigate the treacherous terrain of daily life during a pandemic.

Brooks, his wife, Nicole Malesic, and daughters Zaida, five, and Waverly, two, have fostered 16 dogs over the past two years.

They frequently make videos and do photo shoots of the animals to encourage adopters on social media.

As COVID-19 has spread, they and other fosters have been especially busy while dog and cat adoptions have risen sharply nationwide.

‘People are looking to enrich their homes,’ he said.

‘People are getting dogs or cats or different companions for their homes because we are dealing with a time that’s unprecedented.’

Prisons have become hot spots for coronavirus outbreaks, which adds another level of stress for anyone working at a maximum-security prison.

Brooks said the dogs help melt it away for him and his family.

The dogs they’ve brought home have been a buoy for the girls after schools closed and playing with other kids was no longer an option.

‘It’s definitely helped with morale around the house because we can only do so many things without being able to go anywhere.’

‘They’re highly rejuvenated when they know a dog is coming. There’s a level of energy inside the home again,’ he said.

‘This, absolutely, without a doubt, has sparked joy — like Marie Kondo would say — in our kids’ lives.’

‘Our two-year-old loves every dog.’

‘She wants to hug every single one of them.’

‘But they understand that we can’t keep the dogs. Our job is to find a quality home for these dogs. If that wasn’t the case, we’d have 16 dogs today.’

Ironically, he was not a dog person growing up, he said as he and his daughters interacted with Maisie Mae, a sweet and gentle three-year-old pit bull-beagle mix rescued from Kentucky.

They played on the back porch of Bridge to Home co-founder Tracey Crompton, who notes that Bridge to Home has fostered 1,500 dogs since its start in 2017.

‘I remember running from dogs and being chased by dogs as a kid,’ Brooks said. ‘I never really had a positive dog experience as a kid.’

But he hasn’t found any other endeavour that gives him so much satisfaction since he left the service as a sergeant.

‘You never really find a complete fit after the military,’ he said.

‘No matter what you do, you go from really feeling like you have a purpose and a duty and you’re really fulfilling God’s work or your nation’s work maybe.’

‘You get back home and … you never really feel that. Now, some people fill that void as state police or firefighters or emergency response people or medical staff professionals.’

‘But for me, I never found that thing to [close] that void.’

He earned an associate’s degree from ITT Technical Institute, worked in a management position for Lowe’s, took a stab at his own business and did charity work for women’s shelters and Citizens Library in Washington, Pennsylvania.

‘No job could fill the void from leaving the service, but I could always circle back to charity. That was the one constant.’

‘The Army values of loyalty, duty, respect, service, honour, integrity and personal courage — charity seemed like it filled that void for me.’

When he and his wife discovered Bridge to Home, Brooks found what he had been searching for since he left the Iraqi desert.

‘These dogs would not have a life. Then when you see them happy …,’ he said, his voice trailing off.

The moment that sealed it, he said, was when he helped a family with a foster daughter adopt a dog he’d fostered.

‘When I saw this dog and this girl get together, something within me just broke,’ he said. “I was like, ‘Oh, my gosh, this is something bigger than myself.”

‘We have this tradition when we bring them home. I always give them a bath — this tough former Army guy.’

‘My wife and I have this unspoken contest to see who the dogs will like more. We keep track of who’s winning. It’s her, but sometimes they gravitate towards me.’

Crompton said he’s a natural. ‘You cannot find a better guy than him. We’re honoured. You’ll see the dogs wrapped around his neck. He’s just a great guy.’

They don’t have a family dog at the moment and are sometimes tempted to keep a foster dog.

‘We had a big bulldog who was a protector, and I wanted to keep him, but he wasn’t the right fit for this house.’

‘He was the right fit for this single guy who just needed something in his life. So you find these stories where you feel like you’re a part of something bigger,’ Brooks said.

“Friends at work are always asking, ‘How can you get rid of them?’ But how can you not? ... We’re not trying to get rid of dogs. We’re trying to find the perfect match. So when those line up, it’s worth it. And then we’re ready for the next one.”

‘If you have space in your home and space in your heart, please consider fostering … especially during a time like right now when we’re in a crisis.’

‘We can be safe and love each other and help each other. It’s one of the best things you can do.’