In Europe, Tillerson carries on but with diminished standing 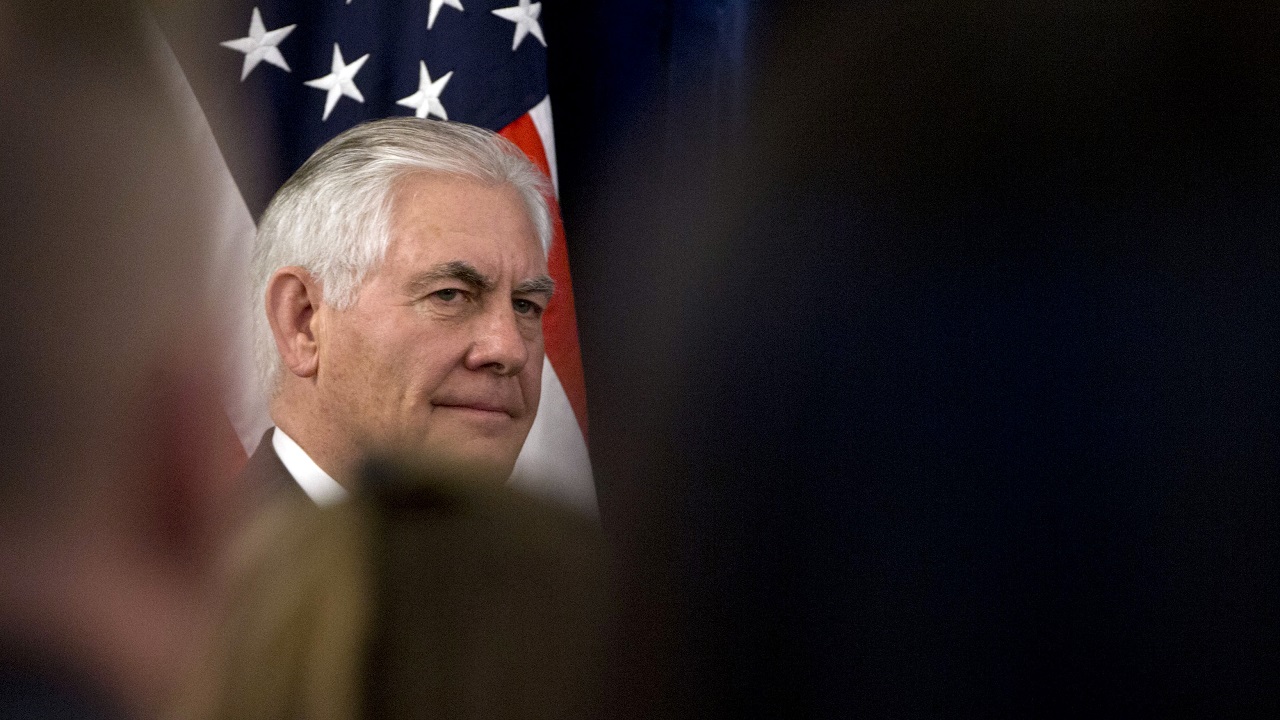 U.S. Secretary of State Rex Tillerson arrives at the US Embassy in Brussels on Tuesday, Dec. 5, 2017.

What do you do when you're America's top diplomat, fourth in line to the presidency, and the White House makes it publicly known you're living on borrowed time? If you're Secretary of State Rex Tillerson, you brush it off, pack a suitcase and hop a flight to Europe, as if nothing had happened.

On the surface, at least, Tillerson carried on in ordinary fashion Tuesday on his first day in the Belgian capital, stoically sauntering from meeting to meeting in his characteristically subdued style. He praised President Donald Trump repeatedly for holding Iran to account and demanding equal contributions from NATO allies, even as he acknowledged getting "a little criticism" over his management of his agency.

"The State Department is not missing a beat," Tillerson told American diplomats at the U.S. Embassy.

Arriving at NATO headquarters for a gathering of foreign ministers, Tillerson ignored a shouted question from a journalist about whether he was confident he still spoke for the president.

Tillerson's tenuous future in the Trump administration has followed him to Europe days after the White House signaled he might be fired — possibly soon. White House officials told multiple news organizations last week a plan was afoot to replace Tillerson with CIA Director Mike Pompeo, a humiliating disclosure that cast a dark shadow over the secretary as he tries to sell Trump's policies to the rest of the world.

Even though Tillerson brushed it off as "laughable" and Trump tweeted it was "FAKE NEWS," the damage to Tillerson's standing had been done.

In Belgium, Austria and France, Tillerson is contending with European officials who now have more reason than ever to question whether he still carries the president's confidence, how much credence to give his policies, and if he'll remain long enough to see them through. For foreign governments, it has created even more uncertainty over dealing with a mercurial administration in which the only voice that seems to matter is that of Trump himself.

There were signs that at least some of those leaders were keeping him at a distance. Federica Mogherini, the European Union's foreign policy chief, spent three hours in meetings with Tillerson before using the occasion to air major European grievances with the United States.

"I don't think you want a list of issues on which our positions are different," Mogherini told reporters. But then she offered one anyway: The Iran nuclear deal, climate change, Mideast peace and multilateralism at the U.N.

Mogherini subtly urged the Trump administration to avoid undermining future Mideast peace talks by declaring Jerusalem the capital of Israel, as Trump has been considering. She took particular issue with Trump's campaign to alter the Iran deal brokered by the EU, the U.S. and world powers.

"The message was heard, I think, loud and clear in Washington," Mogherini said.

It was difficult to tell whether the chilly reception was a consequence of Tillerson's diminished standing or broader, growing European distaste for his boss's agenda. His senior adviser, R.C. Hammond, acknowledged that Tillerson's fellow diplomats had not held their tongues.

"Allies have been very frank today in sharing some of their views," Hammond said. "Dialogues only work if they go two ways."

Tillerson, for his part, said all the right things: He affirmed the "ironclad" U.S. commitment to NATO's collective defense, and praised the Europeans effusively for their help pressuring North Korea over its nuclear program.

At the embassy, though, Tillerson was in clear damage-control mode, owing largely to his planned overhaul of the State Department that is deeply unpopular among the American diplomatic corps. He downplayed concerns about rampant vacancies in ambassadorships and other key posts — including, in Brussels, no U.S. ambassadors to either Belgium or the European Union.

Tillerson said his "redesign" of the State Department was moving into its final phase, sure to show positive results soon.

"While we don't have any wins on the board yet, I can tell you we are much better positioned to advance America's interest around the world than we were 10 months ago," Tillerson said.

Yet Tillerson's uncertain footing in the administration loomed awkwardly over his trip, which will take him later in the week to Vienna and then to Paris.

Though Trump insisted on Twitter that he and Tillerson "work well together," he allowed news stories about Tillerson's impending demise to percolate for more than 24 hours before pushing back. Trump's spokeswoman didn't explicitly dispute that a plan had been hatched to replace Tillerson. Nor did she declare outright Trump's confidence in the former Exxon Mobil CEO.

In Trump's Washington, such is often the way. "Trial balloons" are floated in the press, and competing factions swipe and snipe from behind a cloak of anonymity. It's left to Americans at home to try to discern whether it's happening against the president's wishes or at his direct behest.

Republican Sen. Bob Corker, the Senate Foreign Relations Committee chairman and a Tillerson ally, said it's clear someone has sought to undermine Tillerson.

"I don't know who that is," Corker said after word emerged of the White House plan. "I know he's taken on some tough issues like the reform of the State Department. I know it hasn't gone in a spectacular way."

Tillerson: Trump will scorn but not bolt from Iran nuke deal