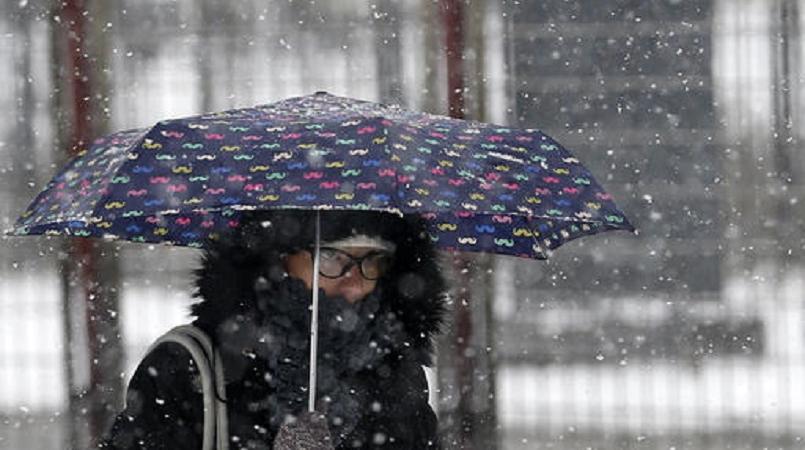 Frigid weather has caused at least four deaths in the last three days In Albania. Snow stopped falling on Monday, but freezing temperatures continue to engulf the whole country.

A 52-year old Albanian man on Monday died in the town of Golem, 80 kilometers (50 miles) west of Tirana. On Sunday, a 53-year old street beggar was found dead in the city of Sarande south of the capital Tirana.

A day earlier, another 38-year old homeless person was found dead in the port city of Durres west of the capital. A 62 year old man died after sliding from a roof where he was trying to remove ice.

Scores of villages mainly in the north and northeast have been isolated and power and water cuts have been introduced, including the capital.

The health and education ministry decided to keep classes suspended for students.

The situation in northeastern Bulgaria remains critical with heavy snow drifts on the roads, freezing temperatures and power outages that have affected some 2,000 households.

Emergency teams trying to clear the roads to remote villages were hindered by strong winds.

Authorities issued a Yellow Code alert for low temperatures across Bulgaria on Monday.

The cold spell was expected to continue until the end of the week.

Schools across the country remained closed on Monday.

Freezing temperatures and strong winds have created havoc along Croatia's Adriatic coast, which isn't used to such cold winters.

Even the sea froze in shallow bays, trapping fishermen's boats to the amazement of locals who haven't seen anything like this in decades. The temperatures in Croatia's tourist centers of Dubrovnik and Split dropped to -7 C (19 F) and strong winds blew off ancient pine and olive trees on the coast.

Ferries and planes were grounded, and traffic over bridges banned. Water pipes, which are dug just below the surface as is the case in warm climates, have frozen, leaving thousands without running water as authorities tried to figure out ways to cope.

According to Czech public radio on Monday, six people are believed to have died of exposure during the latest cold snap, including in the capital, Prague. Meteorologists forecast freezing temperatures to continue in the coming days.

Swathes of Greece have been covered by snow, including several islands, some of which have seen more than a meter (more than three feet) of snow.

Temperatures in some parts of northern Greece have plunged to as low as -18 C (0 F). A state of emergency was declared in the municipality of Kymi on the island of Evia, Greece's second largest island after Crete, where the snow in some areas reached two meters (6.5 feet), leading to cuts to electricity and water supplies.

The small eastern Aegean island of Oinousses reported severe problems from the heavy snowfall, with the local mayor telling Greek media the island had been without landline telephone connections for four days. On the island of Lesbos, drivers needed snow chains to drive just outside the main port town of Mytilene, while heavy snowfall also hit Chios and parts of the southern island of Crete, from where some flights to Athens were cancelled.

Chios and Lesbos are home to thousands of refugees, many living in precarious conditions in severely overcrowded camps. Many are still living in tents despite the severe weather. Rights groups have slammed the conditions and called on the Greek government to act quickly to reduce overcrowding.

Schools were closed in a handful of southern Italy cities not accustomed to such heavy snowfall. Individual schools also closed in Rome and Bologna because heaters weren't working, news reports said.

The sub-freezing temperatures have been blamed for the deaths of at least eight people and have disrupted road, rail, air and ferry travel.

In Kosovo, snow continued to blanket the whole country and left many areas without power.

Police blamed the weather for the death Monday of an ethnic Albanian man whose body was found on a forest road.

Though all national roads were open, police advised careful driving and low speeds. Rural roads are either blocked or hard to drive. Power has been cut in many areas around the country.

The government says 10 people died in the cold Sunday as Poland has been gripped by low temperatures. The deaths bring to 65 the number of weather-related fatalities since Nov. 1, when temperatures started falling to freezing, especially at night.

The spokeswoman for the Government Center for Security, Anna Adamkiewicz, said Monday that the latest deaths occurred across the country, either outdoors or in unheated summer cottages and abandoned houses.

Bucharest Mayor Gabriela Firea said inmates from two prisons would be put to work clearing snow alongside anti-riot police in the Romanian capital. The inmates working on snow removal are doing so voluntarily, Firea said.

She said the initiative would help clean up the capital's ice-clogged streets, which are only partially cleared.

Petcu said natural gas consumption in Romania could reach an all-time high Monday due to the frigid temperatures.

In Moscow, two people have died and 190 people with hypothermia have sought medical help in the Russian capital between New Year's Eve and Jan. 8, the last day of the holiday period in Russia, according to Russian news agencies quoting emergency medical official Sergei Gumenyuk.

The Russian Meteorological Service said the Orthodox Christmas Eve on Jan. 6 was the coldest in Moscow since 1987 when temperatures plunged below -31 C (-24 F). Moscow schools, however, opened on Monday after the holiday recess. In Russia's Urals, schools remained closed in the Tyumen, Khanty-Mansiysky, Sverdlovsk and Yamalo-Nenets regions where temperatures of -35 C (-31 F) were recorded.

Serbian authorities have declared emergency measures in 11 municipalities in central and southern parts of the country as fresh snow and extremely low temperatures have blocked roads and cut off villages. Despite-28 C (-18 F), residents in remote villages on the rough Golija mountain have refused offers from authorities to evacuate their homes during the deep freeze because they won't abandon their animals.

The mostly elderly villagers said they'd rather freeze than abandon their sheep, goats, cows and chickens.

"We have wood and food for the animals," says Dragomir, one elderly resident. "We'll wait."

Police in the southern Swiss region of Valais say a Russian couple were killed and their two children aged 11 and 15 were gravely injured over the weekend after the vehicle they were travelling in tumbled about 225 meters (740 feet) along a snow-covered Alpine road.

Officials said the driver had been trying to park on the roadside, and snowy conditions appeared to have led to the deadly plunge into a pile of rocks. The two children were taken to a local hospital before being flown by helicopter to another in the capital, Bern. They were expected to survive, officials said.

Turkish Airlines on Monday canceled 277 domestic and international flights to and from Istanbul's two airports due to heavy snow. Schools around Istanbul also were closed and the Istanbul governor's office said civil servants in the city would be able to leave work at 3:30 p.m. local time.

Istanbul schools will stay closed on Tuesday as snow continues to buffet the city, halting ferries on the Bosporus Strait that provide transportation for many commuters in the city straddling the narrow gap between Asia and Europe.

Television news showed cars slithering along slippery roads and students who had been given the day off staging snowball fights and tobogganing in parks blanketed in deep snow.

At a local coffee shop, stray cats trying to escape the cold snap lined up under heaters warming an outdoor terrace used by smokers.