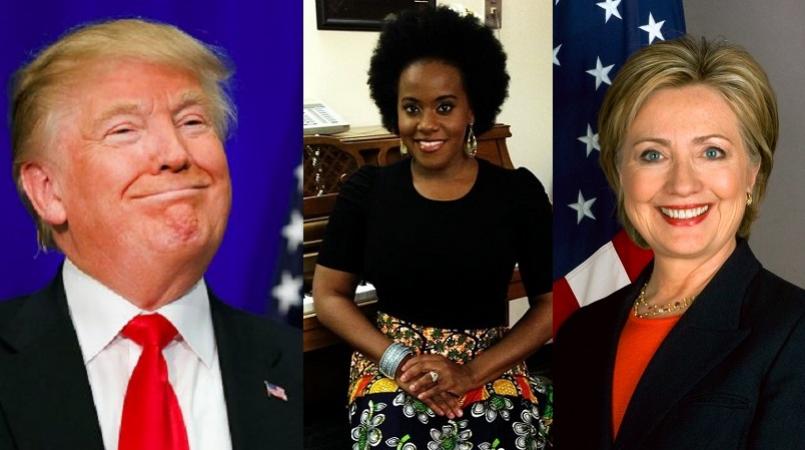 Reggae singer Etana has decided to move her status to the 'Undecided Voter' column until after the end of the debates between US presidential nominees Hillary Clinton and Donald Trump.

The first debate was held on Monday night at Hofstra University in New York.

"I am heavily invested in the outcome of this election and given the backlash on social media because I said I support Trump. I have decided to do some more research, watch the debates and weigh all that before I come to a decision. I am entitled to my own opinion and I have the right to change my mind as I see fit, I will be tuning in to watch 90 unpredictable minutes of this first debate on Monday night," Etana said.

The first presidential debate between Hillary Clinton and Donald Trump is expected to be the most watched in history, with perhaps 100 million viewers tuning in for a showdown with the power to upend an increasingly close race. Locked in an exceedingly close White House race, the presidential rivals tangled for 90-minutes over their vastly different visions for the nation's future.

Over the weekend, Etana was in the eye of a firestorm of criticism from Jamaicans who lambasted her for voicing her support for Trump during an interview on the popular entertainment programme, ER.

Responding to the furore, she issued a statement where she apologised to her fans who may have been incensed by her remarks and made an appeal for unity even as divisive issues such as immigration and taxes threaten to render the fabric of societies apart in Europe and the US.

"My recent remarks were made against the background of the real fear of terrorist attacks and acts of random violence that is so pervasive in the US right now. But I realize now that I cannot give into this fear...we cannot build walls to lock ourselves in and other people that we fear out or we run the risk of isolating ourselves and losing our humanity, a quality we must protect at all costs. We must not allow fear to allow us to lose the best part of ourselves, the ability to love unconditionally, and to connect with our fellow men and women, regardless of their beliefs, religion, or ethnicity," the statement said.
"We are all one, each of us are connected. I will not give up the fight for the poor and oppressed and those who hail from the Wrong Address."
She apologised to her fans and Jamaicans in general.
"I did not intend any offence and if my statements provoked any negative emotions, I apologise. I stand with every black family who has had a member shot by police and my heart bleeds each time there is a new one. I am extremely passionate about change for us all. I have uncles, a son, and a brother in America and I am seriously worried each time they go out their front door," she said.
"I apologise for the hurt you feel and I hope that you will not use one blunder to judge who I am. I stated in the recent interview that my views did not have anything to do with my music and that was said in context of my views on the Republican representative and I assumed that would have been understood. I write my own songs from life experiences( very real to me) which you have all been able to relate to. Jamaica, and all my fans across the world, I am sorry for hurting you. When you hurt, I hurt."
She took full responsibility for her statements, which provoked so much vitriol on social media.
"I would never bash or turn my back on the country, I love the people who sang 'Wrong Address' and other songs I have written so passionately. My statements did not come off right and I won't blame Anthony Miller for that. I take full responsibility for all that went wrong. Please do not forget all the good I have done. I am not offended by any passionate remark, I know you are angry. I love you all unconditionally and nothing will change that. One perfect unconditional love."
On Monday, Clinton called for lowering taxes for the middle class, whileTrump focused more on renegotiating trade deals that he said have caused companies to move jobs out of the US. The Republican backed the controversial "stop-and-frisk policing" tactic as a way to bring down crime, while the Democrat said the policy was unconstitutional and ineffective.