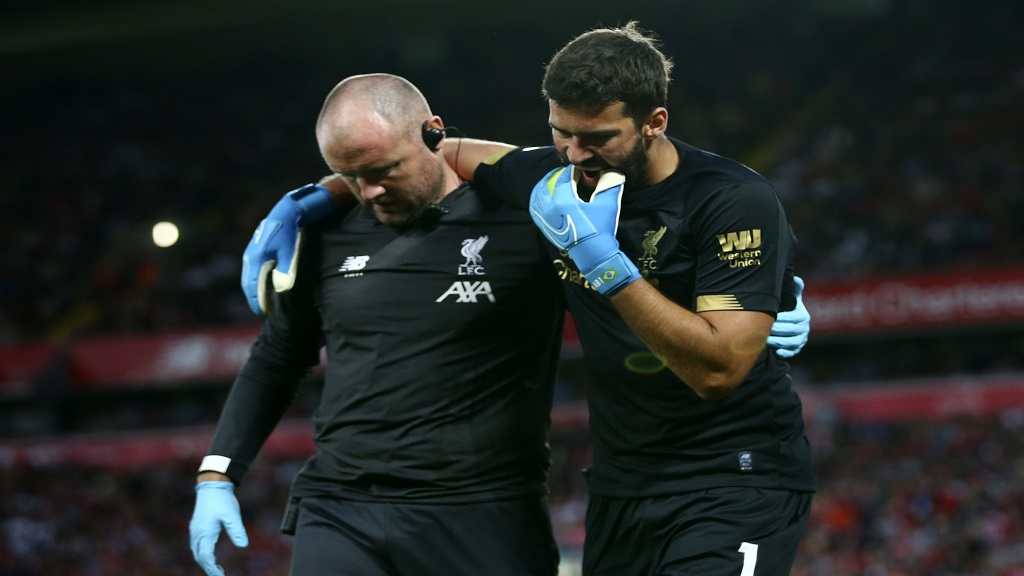 In his first game since Brazil's victorious Copa América final a month ago, Alisson was forced off in the first half at Anfield with a calf injury. The severity of the injury isn't known yet but it will rule him out of the UEFA Super Cup match against Europa League winner Chelsea on Wednesday in Istanbul.

It was the only blot on Liverpool's start of the attempt to be champions of England for the first time since 1990, having been beaten to the trophy in May by Manchester City by one point before winning the Champions League.

Liverpool were gifted an opener seven minutes into season when Grant Hanley deflected Divock Origi's cross into his own net.

Mohamed Salah steered in the second goal in the 19th minute after Roberto Firmino slid the ball behind the Norwich defense. Salah turned provider in the 28th, swinging in a corner that Van Dijk headed past goalkeeper Tim Krul.

After Liverpool had to change their goalkeepers — with Alisson replaced by Adrian — Krul conceded again before halftime when Origi slipped his marker to meet Trent Alexander-Arnold's cross.

On the video-assistant referee system's Premier League debut, there was a delay to the start of the second half when a problem with the audio feed to assistant referee Simon Bennett led to his headset being replaced.

VAR's only task on the night was to run unobtrusive checks after each goal, with no stoppage to play and no need for referee Michael Oliver to consult his monitor.

Promoted as League Championship winners, Norwich had an uncomfortable return to the Premier League after a three-year absence.

But Norwich stemmed the flow of goals in the second half and scored one of their own. Emi Buendia slid the ball through the Liverpool defense and Teemu Pukki controlled before shooting past Adrian in the 64th.

"We were a bit naive in the first half but that will happen with a young team. I'm proud of the way they reacted," Krul said. "I feel we walk off the pitch thinking if we believe in what we are doing we will get some results this season."

Liverpool make rapid start in EPL; lead 4 - 0 at half