Entertainers to send off Reggae Girlz in style 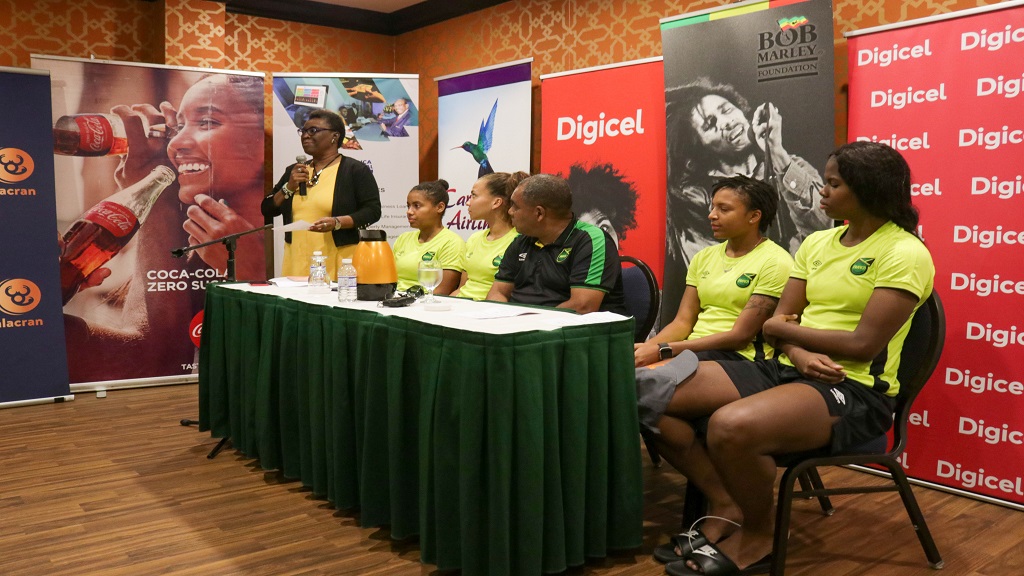 Jamaica’s senior women’s head coach, Hue Menzies (4th left) at a media briefing with members of the training squad at the Jamaica Pegasus on Wednesday, May 15, 2019.

It will be a party atmosphere inside the National Stadium on Sunday where Jamaica’s senior Reggae Girlz take on Panama in their final friendly international on home soil before they depart for their historic debut at the FIFA Women’s World Cup in France.

The month-long showpiece will run from June 7 to July 7.

It will be a fitting send-off for the Girlz as some of the country’s leading artistes will be on show inside ‘The Office’ to send the team off in style.

Among the entertainers down to provide pre-game and half-time entertainment are gospel artistes, Minister Marion Hall, and Chozenn as well as Reggae acts, Queen Ifrica, Chi Chin Ching and Squash. Radio disc jockey Miss Kitty will provide MC duties for this aspect of the evening's activities.

"We are putting out everything to ensure that the Girlz recognize how much Jamaica appreciates their achievement and commitment. We are aiming for a true family oriented experience on Sunday,” said Michael Ricketts, President of the Jamaica Football Federation and Chairman of the local organising committee for the game.

He expressed thanks to those persons who have assisted, including the sponsors and the Minister of Sport, Olivia Grange and her team.

Meanwhile, coach of the Reggae Girlz, Hue Menzies, said he was ready to name the 23-member squad for the World Cup. However, there are some players who are still awaiting clearance from FIFA.

“We are ready to make (name) it now but because of the FIFA  situation, we can't announce it until we get the final word. We were going to announce it (as) it would be easier to make an announcement here in Jamaica, but again we have to wait for the players,” Menzies said, making reference to FIFA eligibility rules, which could deny some players born outside of Jamaica to Jamaican parents the chance to represent the country.