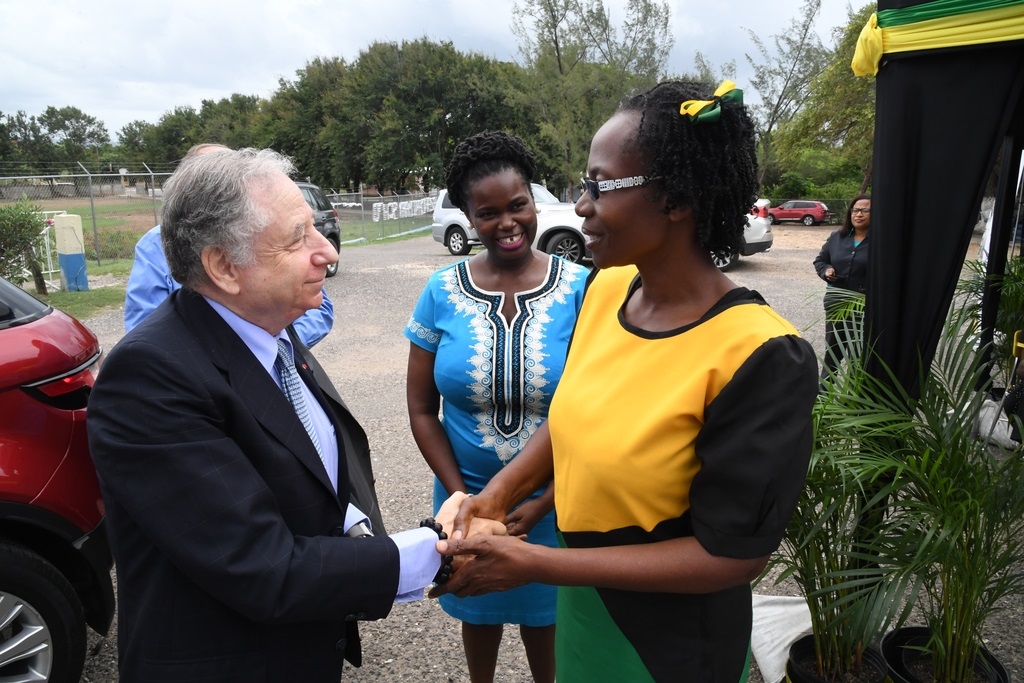 United Nations Secretary-General’s Special Envoy for Road Safety, Jean Todt, has recommended that all helmets imported into Jamaica are certified.

Todt, who is also the president of the Federation Internationale de L'Autombile (FIA), made the recommendation recently, while on a tour of the Hazard Primary School in Clarendon.

It is the first school to benefit from the “X Marks the Spot” Crosswalk Road Safety Campaign, which is being implemented by JN Foundation, in collaboration with funding organisations, UNICEF, the FIA Foundation, and the Abertis Foundation, based in Spain.

“I would encourage you to ensure that all the helmets which are sold in Jamaica are homologated,” he recommended.

Todt was in Jamaica attending the Caribbean Road Safety Workshop, which was held at the Inter-American Development Bank (IDB). The event was co-organised by the National Road Safety Council, the United Nations Economic Commission for Europe, the United Nations Economic Commission for Latin America and Caribbean, the IDB and the Pan-American Health Organization/World Health Organisation.

Since the start of the year, 269 persons have lost their lives in 244 road crashes across the country. Of this number, motorcyclists accounted for the highest demographic, with 82 persons.

Todt informed that every year, citizens in countries, such as Jamaica, are affected by disabilities resulting from road crashes, which, he said, can be prevented through education and enforcement of the law.

The FIA president also commended the work being implemented by the JN Foundation and UNICEF at the Hazard Primary School, which benefitted from the construction of signage for bus lay-bys, pedestrian gates and the widening and paving of the sidewalks, under the X Marks the Spot Campaign.

Onyka Barrett Scott, general manager of the JN Foundation, said that the campaign will continue with the upgrading of 17 other schools, during the next three years.

“More recently, in 2018 and continuing to 2021, through our partnership with UNICEF, we are in the process of identifying 18 schools, and Hazard Primary School was the first. We will make critical infrastructural changes in the schools zones, to ensure that children are safer on their way to school and back home,” she said.

Barrett Scott informed that these improvements will range from constructing bus stops, erection of bus lay-bys, installation of speed taming mechanisms, painting pedestrian crossings or de-bushing, to name a few.

Mariko Kagoshima, UNICEF Representative, stated that her organisation was happy to be part of the “X Marks the Spot Campaign.” And, she pointed out that, globally, road traffic injuries are the leading cause of the death of children and young people, from five to 29 years.

“In Jamaica, an average of three children are killed each month, as a result of road traffic accidents, and that is three too many,” she pointed out, “And, many more children suffer devastating injuries from road crashes.”

Kagoshima said that a UNICEF Poll, conducted in 2018, revealed that 70 per cent of children do not feel safe on the road; and 40 per cent want penalties to be enforced for those who drive recklessly.

Sonia Thomas, vice principal of Hazard Primary School, expressed her gratitude on behalf of the school, for the improvement, which she said has not only made the students safer; but, has also instilled pride in them.

Thomas stated that, as a result of the improvement to the school, more parents in the community now perceive the school as the first choice for their children.

Also, in attendance for the tour, was Mike Henry, Member of Parliament for Central Manchester and Minister Without Portfolio in the Office of the Prime Minister, who expressed gratitude to the partners who have improved the safety of students.

'Jamaica importing vehicles that can kill'