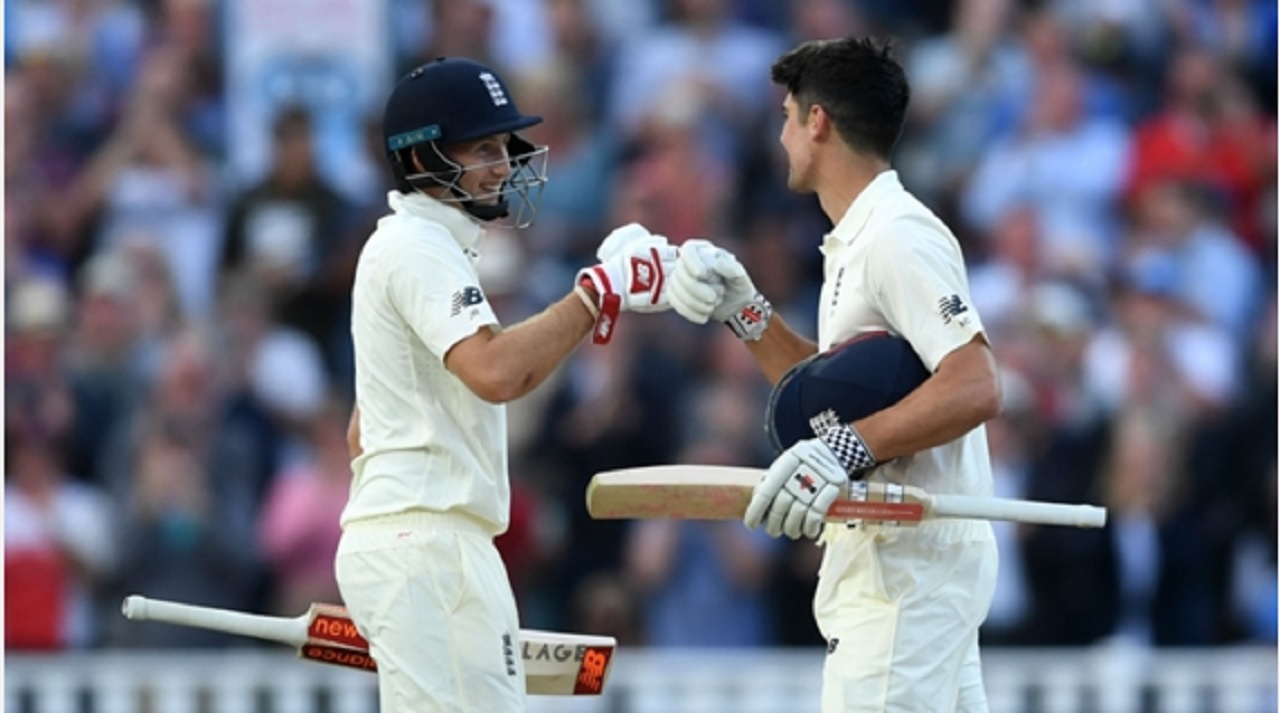 Alastair Cook and Joe Root each compiled centuries and shared a record third-wicket partnership at Edgbaston as England dominated the opening day of their first day-night Test against West Indies.

The Windies enjoyed early success with the pink ball on Thursday after losing the toss, debutant Mark Stoneman and Tom Westley each falling for eight in a continuation of England's top-order struggles.

With the Ashes just three months away, there remains considerable uncertainty over the make-up of England's top five, but Root and his predecessor as captain were able to provide reassuring stability in a stand of 248 that helped the hosts reach 348-3.

Root, who set an England record by passing 50 for the 11th Test in succession, was bowled by Kemar Roach (2-72) for 136 in the day's final session as batting predictably became trickier under floodlights, but Cook remained undefeated on 153 at stumps, with Dawid Malan 28 not out.

Comfortably England's leading run-scorer and century-maker in the five-day game, Cook now has 31 Test hundreds, putting him one shy of former Australia skipper Steve Waugh, who sits 10th on the all-time list.

West Indies' one-dimensional attack, lacking a frontline spinner, struggled to apply pressure following their early breakthroughs. On an easy-paced surface offering predictable bounce, the two centurions were barely troubled - their partnership topping the previous best for the third wicket in Edgbaston Tests, an alliance of 227 between Robin Smith and Alec Stewart for England against Pakistan in 1992.

As Cook and Root cashed in, Stoneman and Westley must have rued their own failings to make a telling score.

Stoneman - Cook's 12th opening partner in Tests since the retirement of Andrew Strauss - made a confident start with fours either side of the wicket off Roach in the opening over of the match.

However, Roach responded in his next set of six with a superb delivery that seamed away to take off stump. Stoneman could consider himself unfortunate given the quality of bowling that followed.

Miguel Cummins did produce a fine delivery to trap Westley plumb lbw - a review required to send the number three on his way after umpire Marais Erasmus surprisingly turned down the Windies' initial appeal.

From that point on, however, the tourists offered little threat and Cook and Root were each able to cruise along at tempos that have become so familiar - the latter predictably scoring at a quicker rate than his partner.

The Windies finally claimed a third scalp when Roach breached Root's defences and Malan survived an early scare on two when a thick edge off Kraigg Brathwaite evaded slip.

Malan negotiated Thursday's remaining overs, though, and there was to be no shifting the obdurate Cook as England remained in command.

To make matters worse for West Indies, skipper Jason Holder – who bizarrely declined to immediately take the second new ball – left the field midway through his 16th over having appeared short of full fitness earlier in the day.