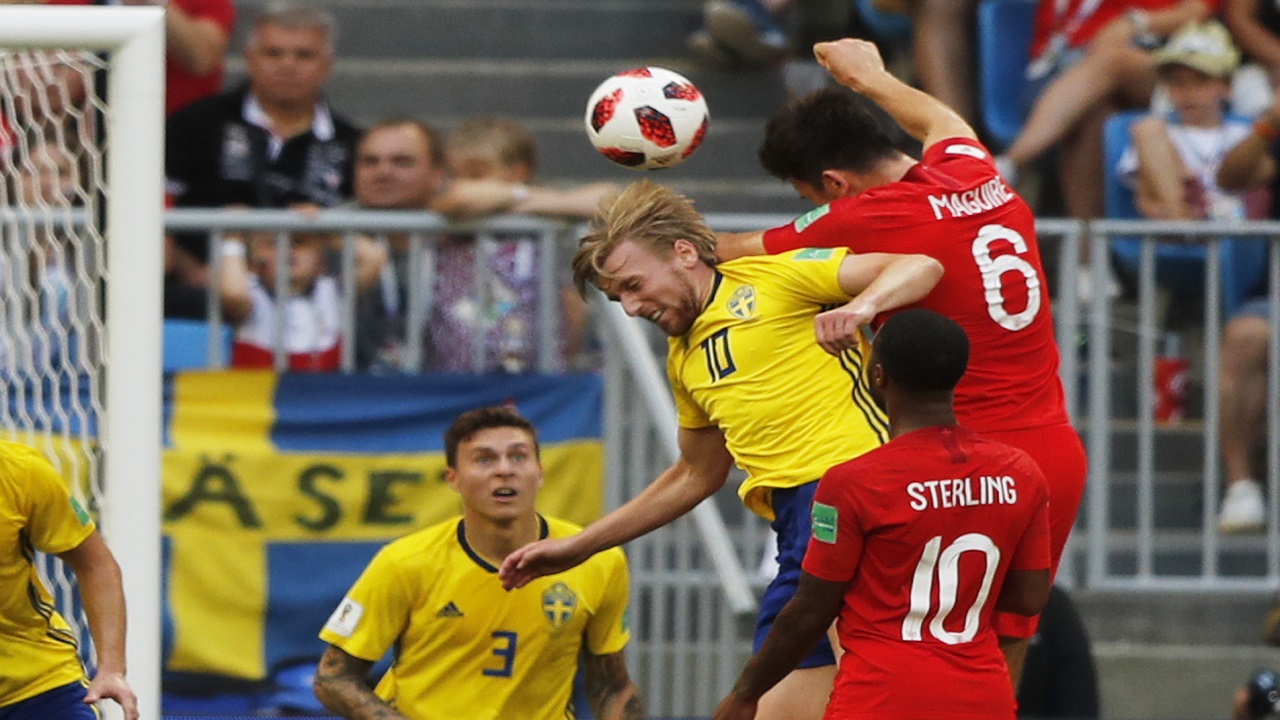 England's Harry Maguire, right above, scores his side's opening goal during the quarterfinal match against Sweden at the 2018 football World Cup in the Samara Arena, in Samara, Russia, Saturday, July 7, 2018. (AP Photo/Frank Augstein).

Harry Maguire and Dele Alli scored headers as England booked their place in a first World Cup semi-final since 1990 by beating Sweden 2-0 on Saturday.

Maguire and Alli struck either side of half-time in Samara to move the Three Lions into the last four, and they will face either Croatia or hosts Russia on Wednesday.

England dominated after making a slow start, Maguire scoring from Ashley Young's left-wing corner after half an hour to put Gareth Southgate's side on track.

Jordan Pickford made tremendous saves to deny Marcus Berg and Viktor Claesson either side of Alli doubling England's lead, the midfielder nodding in Jesse Lingard's centre.

Although the World Cup's top scorer Harry Kane was muted, England held Sweden at bay to follow up their penalty success against Colombia with a more comfortable victory.

Sweden had advanced from three of their four previous World Cup quarter-finals but could not find a way to beat Pickford as the Three Lions marched on to the semis.

Claesson hammered the game's first shot over the crossbar in the 12th minute as a cagey start saw both sides play loose passes due to early nerves.

Raheem Sterling then set up Golden Boot leader Kane, who slotted wide, with England - playing in their first World Cup quarter-final since 2006 - starting to find their feet.

And they took the lead in the 30th minute with their eighth set-piece goal of the tournament.

Olsen did well initially with a strong hand to deny Sterling, who dallied with the rebound and allowed Andreas Granqvist to make a vital block.

Pickford was called into action for the first time shortly after the restart, diving to his left to superbly palm away a header from Berg, who climbed above Young at the back post.

The importance of that terrific save was made clearer as England struck again in the 58th minute.

Another England set-piece caused chaos and, although Sweden initially cleared their lines when Lingard delivered a perfect cross to the back post, Alli was there to double his side's advantage.

Pickford made a smart stop from Claesson after he combined well with Berg, Sweden coach Janne Andersson turning to John Guidetti from the bench.

Guidetti teed up strike partner Berg in the 71st minute but Pickford, who kept his first clean sheet of the World Cup, tipped the effort over the crossbar.

Such was England's comfort in the closing stages, Henderson - at risk of missing the semi-final through suspension - could be replaced by Eric Dier as Southgate's side moved on to Moscow.