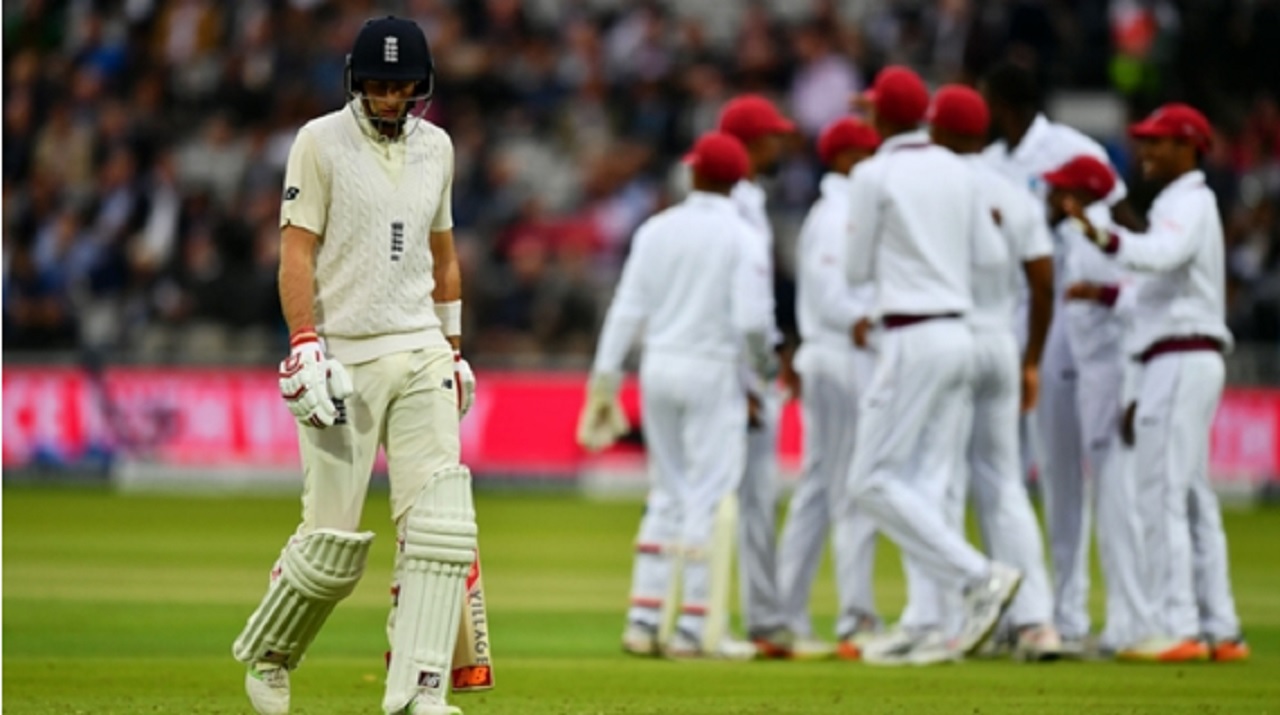 West Indies celebrate the wicket of England captain Joe Root (left) on day one of the third and deciding Test at Lord's on Thursday.

England collapsed to 46-4 as Ben Stokes' fine outing with the ball was overshadowed by the failings of the hosts' top order against a resurgent West Indies on day one of the third and deciding Test at Lord's on Thursday.

A total of 14 wickets fell on the day, with Stokes the destroyer-in-chief for England as the tourists were skittled for 123.

The vice-captain returned career-best figures of 6-22 to seemingly put Joe Root's side in command, but the start of their reply was abysmal.

England were spared further damage by the onset of bad light, leaving the final match of the series finely poised.

An unchanged Windies won the toss and chose to bat first on a green pitch, with Root conceding he was not sure what he would have done given the choice.

James Anderson struck early to account for Kraigg Brathwaite for 10, a regulation nick through to Jonny Bairstow giving the England seamer his 498th Test wicket.

After a brief rain delay he moved to just one shy of a historic 500, with Bairstow taking an excellent diving catch to dismiss Kyle Hope, who failed to score.

Toby Roland-Jones, in for Chris Woakes, took Shai Hope (29) and Jermaine Blackwood (1) out of the equation, with Stokes having got rid of Windies' top scorer Kieran Powell for 39 in between.

That trio of wickets left the visitors floundering on 87-5 and things only got worse once Stokes hit his stride.

The Durham all-rounder took centre stage by cleaning up the lower order, as Roston Chase (18) and Shane Dowrich fell in the 44th over.

Holder (9) was his next victim, while Roach and Shannon Gabriel fell in consecutive balls without adding to the total.

England's response did not start well, though, Stoneman wafting at one from Roach to get out caught behind.

Cook also fell having ticked over to 10 runs, while there was still time for Westley and Root to be sent back to the pavilion as the hosts somehow closed the day on the back foot.