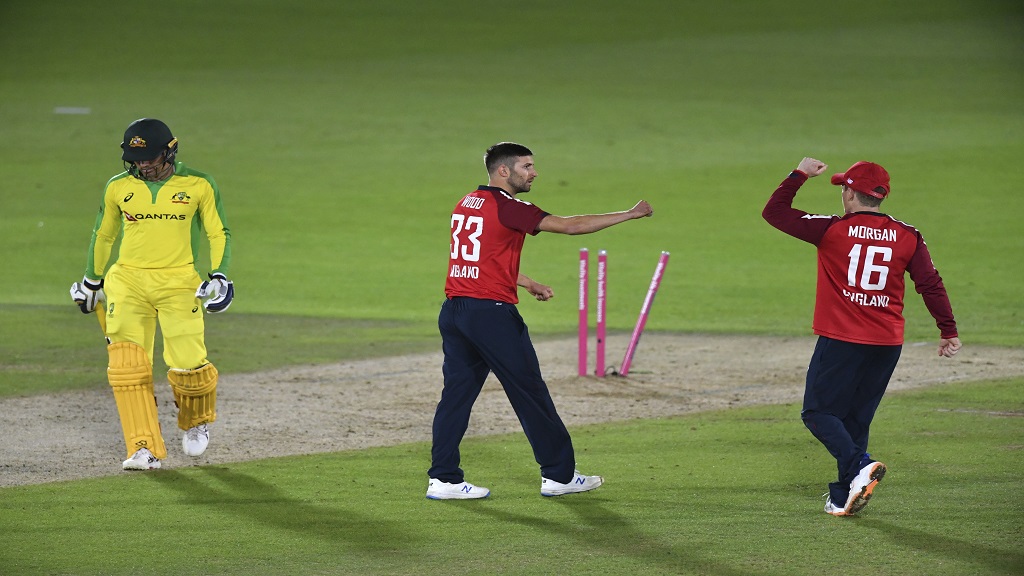 England beat great rival Australia by two runs in a Twenty20 thriller that went down to the final ball to take a 1-0 lead in the three-match series on Friday.

Chasing 163 to win at the empty Rose Bowl, Australia collapsed from 124-1 after 14 overs to fall short on 160-6 in their first match of international cricket in six months because of the coronavirus pandemic.

After losing four wickets for nine runs off 14 balls, the Australians needed 26 runs off the final three overs, 19 off the final two and then 15 off the last, bowled by Tom Curran.

Marcus Stoinis hit a huge six over cover off the second ball to leave the tourists needing nine runs off four, but couldn't hit another boundary.

Australia were handed a brilliant start to the chase as captain Aaron Finch (46) and David Warner (58) shared a 98-run opening stand. Things started going downhill, though, after the loss of Steven Smith for 18 to make it 124-2 and Glenn Maxwell four balls later for one, both falling to the spin of Adil Rashid.

“We knew England would keep coming hard," Finch said, “and we probably struggled to find the boundary in that 12- to 18-over mark. That’s something to work on.”

England eked out a total of 162-7 mainly thanks to Dawid Malan (66) and Jos Buttler (44). No other player reached double-figures, with Kane Richardson having figures of 2-13 and Maxwell getting 2-14.

It was the first time England have defended a target under 180 since 2016.

The top-ranked Australians hadn't played since mid-March when their scheduled ODI series against New Zealand was abandoned.

England can wrap up the series by winning the second match back at the Rose Bowl on Sunday.

Pakistan sign off tour of England with series-tying T20 win

Anderson gets to 600 wickets; England win series against Pakistan