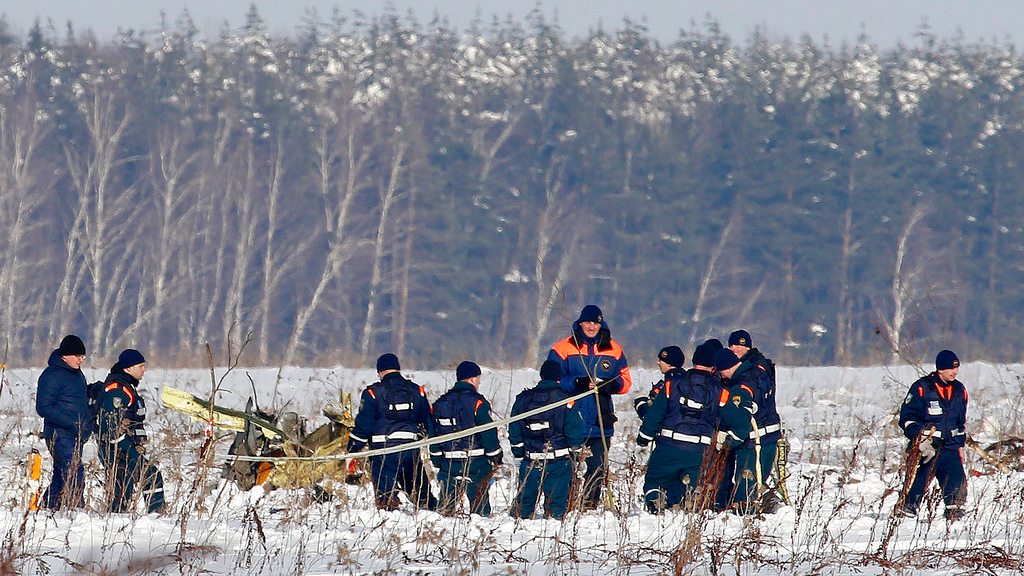 Emergency teams combed snowy fields outside Moscow Monday for debris from a crashed Russian airliner and the remains of the 71 people who died.

The An-148 twin-engine regional jet bound for Orsk in the southern Urals went down minutes after taking off from Moscow's Domodedovo airport Sunday. All 65 passengers and 6 crew on board were killed.

Transport Minister Maxim Sokolov said the search for victims' remains will take a week. He noted that emergency teams already have found the plane's flight data recorder, which is crucial for determining the crash's cause.

Investigators quickly ruled out a terror attack, but will not speculate on possible reasons for the crash.

The debris is scattered across 30 hectares (74 acres), according to the Emergency Ministry, which used drones to direct the search.

The plane was operated by Saratov Airlines, which said the plane had received the due maintenance and all the necessary checks before the flight.

Tass said the plane entered service in 2010 for a different airline, but was taken out of service for two years because of a parts shortage. It resumed flying in 2015 and joined Saratov's fleet a year ago.

The 65 passengers ranged in age from 5 to 79, according to a list posted by the Russian Emergencies Ministry.

Most of the victims were from Orsk, where the authorities declared official mourning Monday.

The An-148 was developed by Ukraine's Antonov company in the early 2000s and manufactured in both Ukraine and Russia.

The last large-scale crash in Russia occurred on Dec. 25, 2016, when a Tu-154 operated by the Russian Defense Ministry on its way to Syria crashed into the Black Sea minutes after takeoff from Sochi. All 92 people on board were killed. The probe into that crash is still ongoing, but officials indicated that a pilot error appeared to be the reason.

Plane with 71 aboard crashes near Moscow; no survivors seen