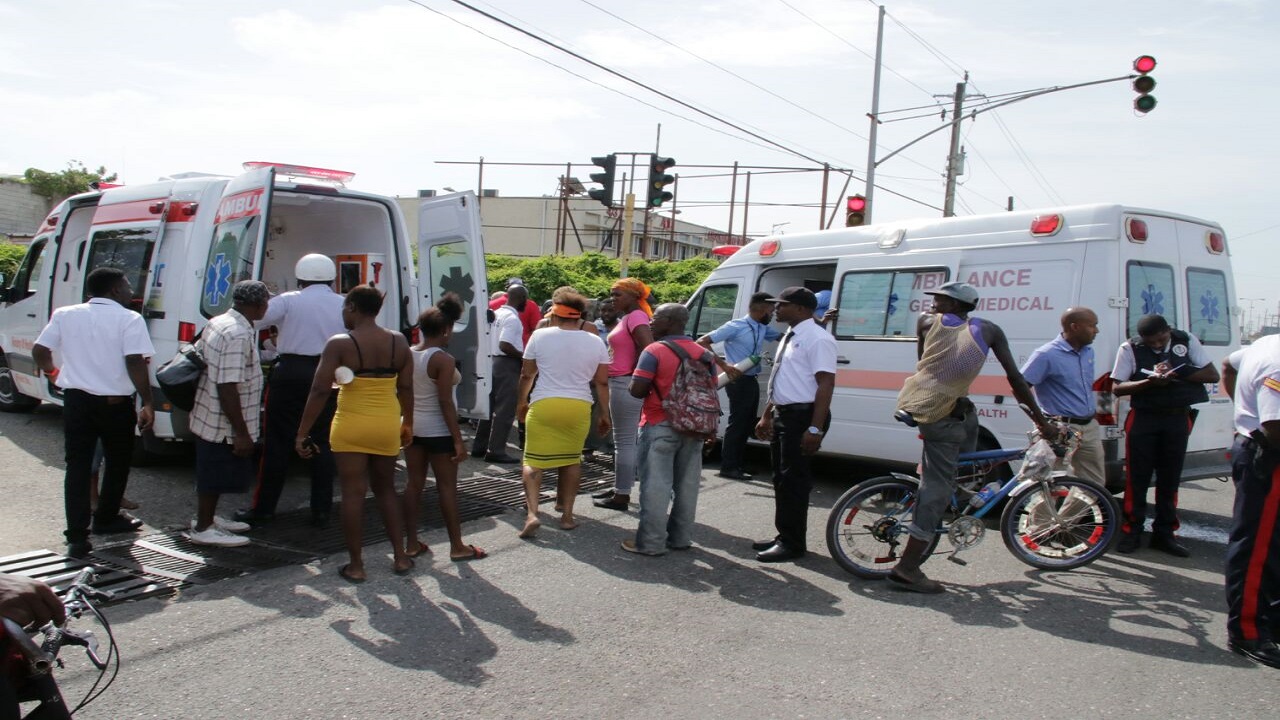 File photo of ambulances at an accident scene in Kingston.

Hundreds of Jamaicans who may be planning to move from one part of the Corporate Area to the next to access or seek medical assistance, especially in emergency circumstances, are being placed at risk with the ongoing traffic situation, a Loop News probe has revealed.

The probe since Tuesday revealed in no uncertain manner, that the gridlock that has gripped sections of the city over the past three days has brought transportation of all forms to a virtual crawl, and has significantly increased the timespans in which emergency vehicles are able to travel from one point to the next.

“What we now seeing needs urgent attention. This is not an attempt to create panic, but imagine with what we are now seeing taking place in the Corporate Area, imagine an individual finding him or herself in an emergency situation and needing to move quickly to a hospital or a another medical facility.”

This was the question asked by a concerned motorist who claimed that he found himself in exactly that position on Tuesday.

“My baby mother got in a situation where she wanted to reach to the hospital, and we called for help and were trying to move from Molynes Road to the nearest health facility, and found ourselves travelling at a snail’s pace (in an official emergency vehicle with siren),” said the driver.

He said with the gridlock, vehicles were barely moving.

The situation was said to have been made even worse, with some motorists simply ignoring the siren.

“There were those who just could not move (based on the logistics), but then there were others who just did not budge,” he stated.

Clear evidence of the situation he described was seen along Washington Boulevard and a number of other major and critical corridors in the Corporate Area both on Tuesday and Wednesday, days two and three of the ongoing gridlock in sections of the city, arising from the closure of Portia Simpson Miller Square to all vehicular traffic to facilitate major bridge construction works in the area.

The closure is scheduled to last for the next eight months.

On Washington Boulevard, for example, an ambulance was seen with its driver trying desperately, but to little avail, to quickly make his way along the clogged roadway.

A Loop News team saw the ambulance with the siren blaring and all the lights flashing, hardly being able to move faster than other vehicles around, and there were several occasions that it had to stop moving for minutes at a time.

Calls were made to a number of medical facilities that provide ambulance service, and the response was that with the current traffic situation, in the event that an emergency call is made to the service providers, the responding teams will have to spend time to make workable route arrangements before heading on the roads to actually handle the emergencies. That approach, while it cuts down on the time lost in the gridlock settings, also significantly increases the general response times, in comparison to normal traffic situations.

Official from one of the facilities said even the prior route mapping strategy has been coming under challenges, “as with many motorists generally trying to also find alternative routes to reach their destinations, there are often traffic congestions in even the most remote off-road areas,” said the operator.

And while motorists continue to fume about the situation since Monday, the police say they have stepped up the use of technology to track and better monitor the ongoing traffic problems that motorists and commuters alike have been experiencing.

The police, via their official Twitter page, said through the use of drone technology, they have been able to identify areas where traffic is flowing freely, and relay the information to members of the public to take some pressure off the clogged areas.