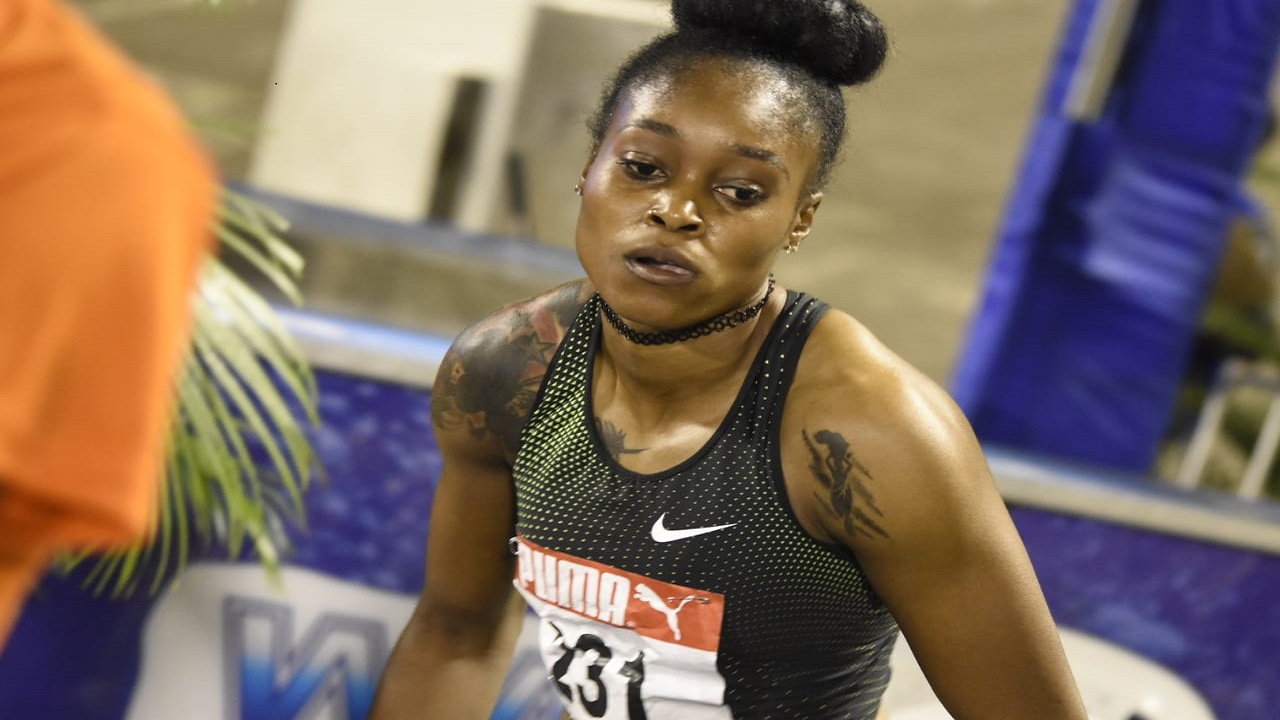 Double Olympic sprint champion Elaine Thompson following her victory over Shelly-Ann Fraser-Pryce in the women's 100-metre final on the second day of the four-day National Junior and Senior Championships at the National Stadium on Friday night.

Double Olympic sprint champion Elaine Thompson and  Tyquendo Tracey were crowned national champions in the women and men's 100 metres at the four-day JAAA/SVL National Junior and Senior Championships at the National Stadium, on Friday night.

Thompson, competing for the first time since an easy victory  at the Jamaica International Invitational Meeting on May 19, clocked 11.01 seconds to relegate Fraser-Pryce, who was very lucky to be in the final after surviving a big false start earlier in the semi-finals.

Fraser-Pryce, who took a year off from the track to give birth last August, clocked a season-best 11.09 second, while Shericka Jackson finished third in 11.13 to complete a MVP sweep of the top three places. Jonielle Smith of Auburn University finished fourth in 11.15, while 16-year-old fast-rising star, USA-based Briana Williams clocked 11.21 for fifth.

Blake, the 2011 World Championships gold medallist, was earlier disqualified from the semi-finals following a false start. However, Blake was allowed to run under protest and won easily in 10.19 following a drama-filled heat where the starter had to call back the field four times due to false starts.

The four false starts delayed the race for some 20 minutes. Blake was called twice for false starting. On the first occasion the field was giving a warning and then Blake was shown the red card on the other occasion but was allowed to run under protest.

The fourth false start was registered by Oshane Bailey and he was immediately shown the red card but remained on the field under protest. Bailey, however, was removed from the track by one of the Sprintec coaches.

Meanwhile, Michael Bentley of the University of Technology defeated a very strong field to win the Boys' Under-20 100-metre final in a personal best 10.30. Michael Stephens (10.35) of Calabar High and Kingston College's Jhevaughn Matherson (10.37) finished second and third respectively.

Russell, the fifth fastest in the world this season with 53.78 seconds, powered home in 54.18. Leah Nugent, representing Puma, closed well for second place in 54.70, while Ronda Whyte of Sprintec finished third in 54.90.

The men's 400-metre hurdles was won by Annswert Whyte who easily defeated Shawn Rowe, representing Puma, and Kemar Mowatt of University of Arkansas.

On the field, Shadae Lawrence of Kansas State University won the women's discus throw with an effort of 61.44 metres and Tissanna Hickling of GC Foster College took the women's long jump with 6.50 metres.