Eight members of the judiciary appointed to higher office 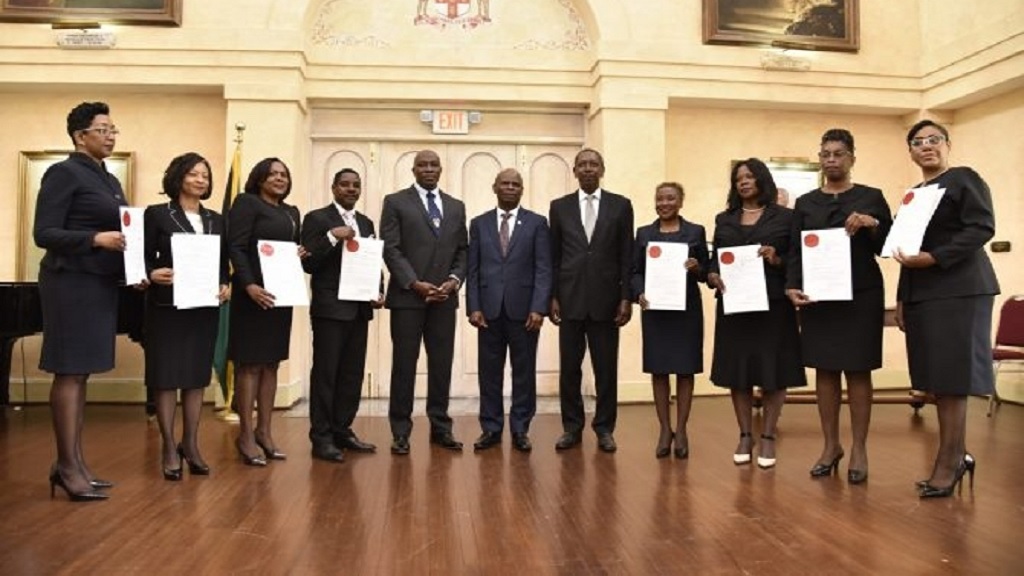 Eight members of the judiciary have been appointed to higher office within the local court system.

The eight were sworn in by Deputy Governor-General, Steadman Fuller, during a ceremony at King’s House.

Congratulating the new appointees, the deputy governor-general encouraged them to continue to maintain the high standard of professionalism that is required of them.

“We know that they have already proven their worth, and we wish them all well as they assume their new responsibilities,” he said.

Fuller noted that the country’s judicial system is highly respected in the region, the Commonwealth and the wider world, adding that “we continue, therefore, to be proud of the service rendered by our legal luminaries and the justice system”.

“Across the region, across the Commonwealth and beyond, we enjoy an enviable reputation for the probity of our judges and the respect in which our judicial system is widely held,” he added.

Fuller also pointed to the recent steps taken by the Chief Justice to improve the efficiency of the court system, describing them as  important. He said further that the administrative measures, coupled with the relevant technologies, are guaranteed to impact the timeliness of decisions and, ultimately, the greater satisfaction of all those connected with the courts of law.

For his part, President, Court of Appeal, Dennis Morrison, urged the appointees to continue to serve the country with dignity, while upholding the rule of law.

And Chief Justice, Bryan Sykes, said the appointments are critical in accelerating the rate of transformation to make the country’s courts more efficient.

“This is not a reward for long service. Judicial appointments at higher or lower levels are expressions of trust, confidence in your ability to be balanced, fair and prepared to keep up-to-date with the law. In other words, you are prepared to work and work hard to ensure that the governance of Jamaica takes place in accordance with the rule of law,” he said.

Responding on behalf of his colleagues, Justice Fraser expressed gratitude for the trust reposed in them. “We aim to do our best,” he said.

PHOTOS: 47 sworn in as Jamaican citizens